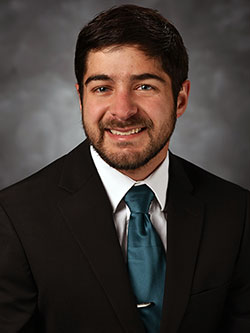 arc​h 2018 - During their first year of medical school, CU students go through an informal precursor to Match Day’s envelope-unsealing ceremony.

It’s a light-hearted, yet serious convention where student gather to open envelopes that reveal the name of their clinical foundations preceptor, often a major influence on a student’s education.

Parsa Ghasem recalls being excited to open his envelope, but disappointed when he saw it was empty and wouldn’t know his preceptor’s identity for a few days. When he did learn the name, he remembered the physician, Jonathan Pell, MD, an internal medicine specialist, because he had presented a technology lecture to medical students earlier in the year.

“Initially I thought ‘Great. I wonder how much medicine I’ll learn from this tech guy,’” he said. “But from that point on we got along famously.”

“I really enjoyed the breadth and depth of internal medicine. It’s never a one-man show, which is just great, and it’s everything I signed up for when I said I wanted to be a doctor. I love seeing a lot of different patients and learning their stories.”

Ghasem was inspired to become a physician in high school after his mother began having health problems, and he witnessed her primary care physician carefully explain tests and procedures to her.

“I remember thinking that I wanted to do that for someone. That’s why I signed up to be a doctor in the first place. You can enjoy the mental stimulation of medicine, but it means nothing if you’re not able to walk your patients through a scary process.”

As a hospitalist, he will be involved in academics, an interest he discovered when his plans for a research career fell through.

Ghasem spent three and a half years in a lab as an undergraduate at CU Boulder. He was certain that research was his future.

“I worked with a group of people who loved learning, and that made an impression on me. It didn’t matter if they didn’t get the results they wanted. They’d still say “Oh, that’s interesting’ no matter what the result was. It was the most pure form of learning I had ever experienced.”

During the summer between college graduation and the beginning of medical school, Ghasem, a Colorado native, joined a research lab at Children’s Hospital Colorado. He planned to stay connected to the lab and join the research track.

Then the lab lost funding, and his hopes of joining the track disappeared. For the next few months he was uncertain about his future, but during his second year in medical school he saw an announcement asking volunteers to help first-year students study for their physical exams.

“I really enjoyed doing it, and I got more and more involved. Any time I could, I would teach, and I ended up as a co-director for the advisory colleges.”

Under his leadership, the colleges initiated two activities to help students prepare for major portions of their training: passing Step One at the end of second year, and preparing for their clinically intensive third year, including how to study for shelf exams.

“We all talked about areas where we thought we felt a little lost and could have used some insight from more senior students. It was fun and rewarding, and students afterwards said that that was exactly what they needed even though they didn’t know they needed it.”

Ghasem, 26, an inductee into the Gold Humanism Society, says academic medicine has the big societal impact he wants.

“One doctor can see 1,000 patients, let’s say, in a career,” he said. “But if you help create 20 great doctors, there’s no limit to the amount of lives you can improve.”

Ghasem, who ​will spend his residency at the University of Michigan Hospital in Ann Arbor, advises new medical students to heed the advice offered to his class during their White Coat Ceremony four years ago: review your personal statement from time to time to remember why you wanted to become a physician.

“I agree with that,” he said. “When it’s 2 a.m. and you’re exhausted, but you’re nowhere near done with the slide deck you need to memorize for an exam tomorrow, the answer to that question is what keeps you going.”