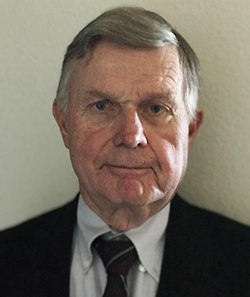 While in high school, a young Dr. Daniel Smith was invited by a family friend to observe a routine appendectomy at Porter hospital. That day, he fell in love with surgery and decided on that as a profession. There was something to the mystery of the surgical theatre, the need to perform under pressure, that spoke to the teenager. This early experience created a determination to pursue medicine, which in turn allowed him to tailor the rest of his schooling to achieving that specific goal. He applied for medical school at the University of Colorado, and was accepted. Unsurprisingly, it was his surgical rotations which were the most important to him while studying there.

After graduating from medical school in 1966, Dr. Smith started his career at the Naval Hospital in San Diego and then elected to attend the Naval School of Aviation Medicine before serving in the Navy in Hawaii and Okinawa. After this stint, with his interest in surgery strong, he returned to the University of Colorado for a general surgery rotation in 1970, and then a second residency at the University of California Medical Center in San Francisco, focusing on cardiothoracic surgery in 1974. It was the intricacy demanded of cardiac surgeons that appealed to him most of all.

Dr. Smith returned to Denver to practice in 1976, first at Grow Surgical Group, then Arapahoe Cardiovascular Surgical Group, and finally at Colorado Cardiovascular Surgical Associates. He retired from practicing medicine in 2000. Like many, he looked for ways to occupy himself and give back with his newfound free time. As a man of deep faith, the appeal of humanitarian work was strong. On a service trip to Cambodia in June of 2000, accompanied by his friend Dr. Mark Sheehan, Dr. Smith observed the dire medical needs of the country whose infrastructure and social landscape had been devastated by the Khmer Rouge. Physicians had been explicitly targeted by the regime, which made Cambodia uniquely lacking in healthcare professionals, even decades after the government officially fell. It was that state on the ground that inspired both men to found the Christian Medical Ministry to Cambodia in 2004. The project has continued to grow since then, with the organization training new healthcare practitioners in Cambodia as well as organizing trips over to the country with fellow physicians from the US. Ultimately, the goal is to create a self-sustaining organization to address the health needs of the poorest in the country. When Dr. Smith is not focusing on this cause, he is a devoted husband, father and grandfather.