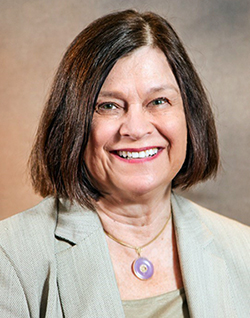 As a nine-year-old Barbara Arnold decided to become a doctor. Elizabeth Blackwell’s biography sparked ambition and served as an inspiration to pursue science and philanthropy. The absence of many other women role models struck her, the gender inequality was clear to her even then. This awareness inspired a desire to pioneer for those who could come after her.

Barbara earned her bachelor’s degree from the University of Nebraska and finished her medical training and residency at the University of Colorado. She wished to benefit incoming students as much as she had from her own relationship with senior physicians, so becoming a clinical professor was a natural extension of that love of teaching. Her early career was characterized by advocacy. She first met with legislators within a month of finishing residency. Here too were teaching opportunities. She took along medical students, residents and fellow ophthalmologists, mentoring them in the necessary efforts of shaping legislation.

A major career accomplishment for her was being one of the women leaders who were among the founders of the national organization of Women in Ophthalmology (WIO). It took three years to convince the Council of the American Academy of Ophthalmology that women be admitted as voting members of the Council.  As the third elected president of WIO she initiated the annual WIO Summer Symposium starting in 1998 in Aspen. The four-day symposium has grown each year, setting attendance records for a meeting that showcases talented scientific presentations and fosters networking essential to career development.

As a skilled watercolorist she teaches art classes to fellow physicians at the WIO meeting. She also teaches watercolor classes to individuals with limited vision. When legally blind people learn to make watercolor paintings they feel a sense of self-accomplishment in doing things that they never before considered possible, and they then have the courage to try other new activities in life.