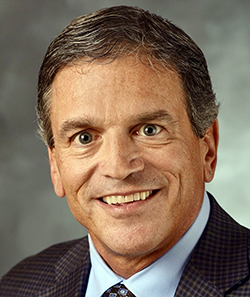 For some, medicine can run in the blood. Dr. Donald Crino is from such a family, coming from a line of accomplished physicians. While initially wanting to strike out on his own, he found his way to medicine, becoming the third generation of physicians in his line. His path to University of Colorado was equally predestined as it was in homestate school. He earned first his undergraduate degree in 1986 and then his medical doctorate from the CU system in 1991.

Though initially planning on entering primary care, anesthesiology appealed to him greatly. His love of anatomy, physiology and pharmacology pointed him in that direction. Add the appeal of critical care and an environment of high pressure, and Dr. Crino was settled on his course. He graduated with honors, and was elected into the Alpha Omega Alpha medical society. His early years in medicine were spent with the army, serving as a flight surgeon and learning aviation medicine. He did his residency at Walter Reed Military Medical Center in Washington DC, focusing on cardiothoracic and vascular surgeries.

Dr. Crino returned to Colorado to work at Denver Health, spending two years there before entering private practice, passing much of that time at South Denver Anesthesiologists. He embarked on a long and successful career, which was only paused with the diagnosis of multiple myeloma in December of 2015. After that, he retired earlier than he planned. It was in this period that he began his involvement with the CU Medical Alumni Association, sparked by a fond memory of receiving his first stethoscope from them as a young medical student. Replacing his title of physician for board member, Dr. Crino immersed himself in the Problem-Based Learning Program, mentoring young medical students. Additionally, he has worked alongside Dr. Matthew Rustici on the Medical Student Innovation Projects, which aim to encourage students to use ingenuity to solve community issues they’ve identified. Through all these activities, his drive was to give back to the community that had benefited him so much. He remains working towards that goal, while also enjoying his retirement and the time it has allowed him to spend with family.