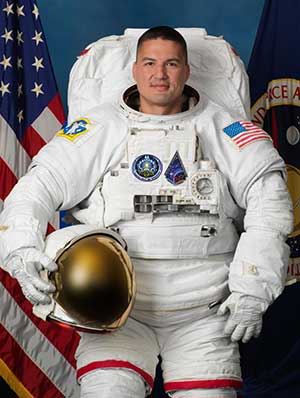 (May 2018) The University of Colorado School of Medicine Alumni Association honored Kjell Lindgren, MD, with the Silver & Gold Award at the 2019 Silver & Gold Alumni Banquet May 23. Dr. Lindgren was recognized with this prestigious award for humanitarianism, citizenship, professionalism, outstanding service to the community, and contributions to the art and science of medicine.

Lindgren has led a unique and remarkable career as an emergency physician, a flight surgeon and a NASA astronaut. While he and his family live in Houston, Texas, he remains involved with the CU School of Medicine as volunteer clinical faculty in the Department of Emergency Medicine Section of Wilderness and Environmental Medicine. In 2018, he delivered the keynote address at graduation and spoke to incoming medical students at the matriculation ceremony.

Lindgren served as a flight engineer for Expeditions 44 and 45 on the International Space Station in 2015, logging 141 days in space and two space walks totaling more than 15 hours, and taking part in hundreds of experiments. He took his CU School of Medicine white coat with him to space and presented it as a special gift to the school.

Lindgren earned his undergraduate degree at the U.S. Air Force Academy and a master’s degree from Colorado State University before serving on active duty at Vance Air Force Base in Oklahoma. In 1998, he matriculated to the CU School of Medicine, authoring two peer-reviewed articles, two book chapters and five abstracts during his tenure here, and earning 11 different honors and awards for academic excellence, innovation, service and character.

Lindgren served as chief resident during his third year of emergency medicine residency at Hennepin County Medical Center in Minneapolis, Minnesota. After graduation, he completed a National Library of Medicine post-doctoral fellowship and master’s degree in health informatics at the University of Minnesota. In 2006, he was selected for a highly competitive aerospace medicine residency at the University of Texas Medical Branch and NASA Johnson Space Center, during which he earned a master’s in public health, and worked as a flight surgeon supporting operations in Star City, Russia, where NASA has International Space Station crews preparing for flight. Throughout his training, Lindgren made important contributions to his field with numerous publications, abstracts and presentations.

Lindgren was selected into the astronaut office in 2009 and, after two years of training, became an active NASA astronaut in 2011. He serves in this role today. His many honors and commendations include NASA’s Distinguished Service, Spaceflight and Exceptional Achievement Medals and the U.S. Air Force Achievement Medal. He has pioneered a one-of-a-kind career in service to science, medicine, community and society, and he embodies the qualities that this distinguished award recognizes in CU School of Medicine graduates.