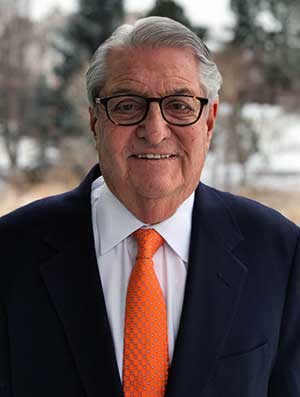 (May 2019) The University of Colorado School of Medicine Alumni Association honored Dennis Battock, MD, with the Richard Krugman Distinguished Service Award at the 2019 Silver & Gold Alumni Banquet May 23. Dr. Battock was recognized for a career of leadership in cardiology and service to the medical community.

Battock has deep roots to the CU School of Medicine and has led a distinguished career marked by engagement and generosity. After the Denver native’s father, CU alumnus Benjamin H. Battock, MD ’29, died prematurely at the age of 50 of a heart attack in 1955, Battock began an educational career and longstanding relationship with the university.

He earned his bachelor’s degree from CU Boulder and his medical degree at the CU School of Medicine in 1964. Battock did his internship and internal medicine residency at Kings County Hospital in New York before coming back to CU to complete fellowships in clinical pharmacology and cardiology. He joined the U.S. Army, serving at Madigan General Hospital in Tacoma, Washington, and later returned to Denver to join the CU cardiology faculty, where he currently holds the position of clinical associate professor of medicine.

Battock subsequently served on the staff at the VA and the CU School of Medicine, while also embarking on what would become four decades of private practice before his retirement in 2011. In 1987, he was responsible for the formation of a physician-owned cardiac catheterization lab at the Medial Center of Aurora, which performed over 55,000 cases in its first 30 years. He was recently recognized by that hospital for his outstanding dedication to their patients since 1974, with the establishment of the Dennis J. Battock, MD, Cardiovascular Center. Battock founded and was president of Aurora Denver Cardiology Associates and the Colorado Heart Institute, and held leadership roles at numerous hospital, insurance and cardiology entities.

Battock has remained engaged with the CU Division of Cardiology, spearheading the S. Gilbert Blount, Jr., MD, Annual Memorial Lecture since 2010. His many honors include the CU School of Medicine’s Centennial Recognition Award for Meritorious Service. He has been a member of the Medical Alumni Association Board of Directors since 2013, currently serving as secretary/treasurer, and was instrumental to his 50th Reunion class gift. He and his wife, Jo, established the Dr. Dennis and Jo Battock Endowed Scholarship Fund as part of the $100,000 Presidential Scholarship initiative. The Battock Scholarship helps current and future generations of students complete their education, and carries forward the memory of Dennis’ father.