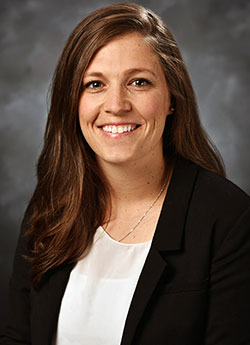 March 2018 - Traveling to Cordova, Spain, Kim Cabral intended to improve her ability to speak Spanish; instead the trip changed the course of her life.

Welcomed warmly by her host family, the father decided she should learn more than language. He introduced her to his urology practice.

“When you’re learning a language you say yes to a lot more things than you actually understand you’re saying yes to,” Cabral said, laughing. “I wasn’t that interested in medicine. The first day I went to work with him we went to the O.R.  We scrubbed up and went in and he said, ‘Are you ready?’ I had never seen a surgery before, never seen a scalpel.”

As a Spanish literature major at Wellesley College who played four years on the school’s softball team, Cabral assumed she’d enter the legal field - her father and brother are lawyers - or international relations. But her urology mentor changed her mind.

“He was so passionate about patient care,” she said. “He just loved his job. He worked in two hospitals and had a clinic in his house. He’d see patients late at night or whenever they needed him. I was just very moved by it.”

Once Cabral settled on a medical career, she applied for an Air Force scholarship reasoning that the discipline needed for college sports would serve her well.

Colorado, though, was unfamiliar ground. Cabral had friends here so she applied to the University of Colorado School of Medicine. She liked the program so much that she cancelled other interviews after CU accepted her.

“Everyone was very welcoming and supportive,” the Southern California native said. “Wellesley was so competitive – I think the East Coast is more competitive than Colorado.”

Cabral, 26, who served as Honor Council president and studied at the Colorado Springs Branch in her third year to take advantage of the longitudinal curriculum, said she plans to specialize in obstetrics-gynecology and hopes to explore oncology and family planning. Concerned about the rising maternal mortality rate in the United States, Cabral said she’ll take advantage of her position in the military to work on health policy.

Clinical research also interests Cabral. With her clinical foundations preceptor, Elizabeth Kvach, MD, she studied failure to thrive among Nepalese refugees at Denver Health. Rather than attending individual 15-minute appointments with a health provider, women and children gathered with researchers for monthly checkups and education sessions.

“They had time to ask questions and talk to each other. We cooked with them and sat down at a table to eat. It was a big learning opportunity for me as well.”

She also built a survey with other students through the Global Health Track to determine why Nepalese women tend to use formula over breast feeding. “We were supposed to go to Nepal and see the rollout of the survey but then the (2015) earthquake happened. We didn’t see how we could be helpful; we were only second-year students, so we decided not to go.”

She and her fiancé, fellow medical student Eric Ryan, will spend their residencies at Oregon Health & Science University in Portland. Ryan will practice internal medicine.

Looking back, she says she has no regrets about her medical school years, but she would recommend worrying a little less.

“You really shouldn’t get stressed,” she said. “It all works out.”