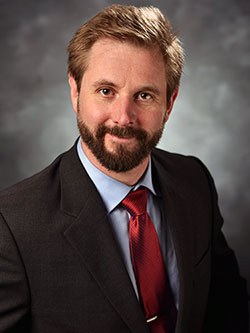 ​March 2018 - Jason Hendrickson was studying biology at the University of Colorado at Colorado Springs, planning a career in research when the Sept. 11, 2001 attacks occurred, changing the lives of many friends and classmates who left school to join the military.

“I really admired that,” he said. “It made sense to me to go out and do something for a few years, to serve your country, and then get on with your education and your life.”

After a medical disqualification blocked him from military service, Hendrickson joined the U.S. Forest Service in 2004, and decided he would devote the next five years of his life to firefighting.

Ten years later, Hendrickson had worked on fire engines, served as lead sawyer and senior firefighter on a hotshot crew and spent the last year of his career rappelling into fire zones from a helicopter. During fire season, crews often took no more than two or three days off each month, and regularly worked 16-hour days.

Despite the work schedule and the perils, he loved many aspects of the job, especially the travel.

“It’s one of the best thing about the job,” said Hendrickson, who fought fires in every Western state except Alaska and Washington. “You get to see a lot of places that you would not otherwise have the opportunity to go to.”

When his mother was diagnosed with breast cancer in 2008, his focus shifted, and medicine became more important. He earned his Emergency Medical Technician certificate.

“I felt a great sense of service through firefighting and always hoped I could continue on with that because the point for me is always what I can be doing for others,” he said. “But I began to see the power of medicine and realized that it’s a way you can continue serving others and have personal satisfaction for your entire career – your entire life really. Firefighting is a young person’s game but in medicine there are ways to stay involved for a long time.”

He liked the idea that a physician can act as a bridge to the world of science. “I find that meaningful. A doctor can be a patient’s guide to scientific knowledge and evidence.”

Raised mainly in Colorado Springs, Hendrickson was determined to attend CU School of Medicine because “I knew it was a place with a fantastic reputation and very good training. I really think our match list demonstrates those qualities since our grads regularly go on to many of the best residencies in the country. Just as importantly, I knew I would be happy here, and I felt that would be very important to sustain me through the challenges of medical school.”

Once he was admitted, he faced the culture shift of returning to school.

“That was a big change. I went from a job that was 90 percent physical to something that was 90 percent mental. I was also concerned about fitting in with my classmates because they were much younger than me. As it turned out, there was a really great mix of ages and experience in my class, and I really felt comfortable with everyone.”

Hendrickson, 42, is part of the first cohort at Colorado Springs Branch, where he met his fiancée, Katia Johnston. The couple will marry the week before graduation in May in Marin County, Calif.

Both will specialize in emergency medicine and serve their residencies at the Cook County Health and Hospital System in Chicago.

He chose the specialty partly because, like firefighting, teamwork is important.

“And I love the diagnostic puzzle in emergency medicine” he said. “Most of all, though, I love the patient population I get to serve. Many of the most vulnerable people in our society access healthcare through the ED. Each day is a chance to make a difference for someone in need. Firefighting really showed me how rewarding it is to be there for others in a time of crisis, and I feel that same sense when I am in the emergency department.

“I found that I feel better walking out of a shift in the emergency department than I do going in.”