State of the School Address 2019 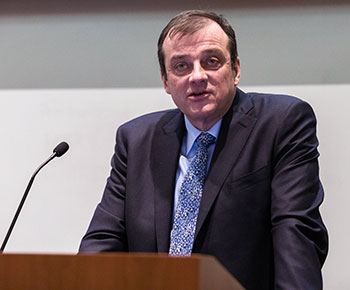 (Feb. 6, 2019) - In his annual State of the School address, University of Colorado School of Medicine Dean John J. Reilly, Jr., MD, outlined ambitious plans for the School’s future that build on existing strengths and recent successes.

“I’m going to do the first two, so for those of you who want to leave: The state of the school is great.”

Among the highlighted accomplishments for 2018, the School of Medicine and its campus partners

The commitment to clinical care, research, and education shown by the faculty, staff, students, and campus partners and the resulting successful accomplishments have propelled the growth of the School of Medicine.

Revenue for the fiscal year ending June 30, 2018 for the School of Medicine and its faculty practice plan, CU Medicine, was $1.6 billion. With $518 million in extramural funding, the Anschutz Medical Campus attracted more grant funding than any other academic campus in the state. Philanthropic support for the School of Medicine totaled a record $129 million in fiscal year 2018.

“I can’t look at this graph or look around this campus without saying that we need thank the Anschutz family for their ongoing partnership and support,” Reilly said about a chart showing steadily climbing philanthropic support increasing from $24 million in fiscal year 2008.

“We had two huge gifts come from the Anschutz family. Sue Anschutz-Rodgers made a substantial commitment to the eye center that now bears her name and Phil Anschutz and his family and their foundation made an enormous pledge for our new building and for our academic programs for the next five years. Those gifts in the past are the ones we’re realizing now and have had a profound impact on the velocity with which we could change things on this campus.”

As a result of that growth, there are challenges that will must be addressed in the near term.

“Educationally speaking, we’re at the limit of medical students we can accommodate for a variety of reasons. One of them is our simulation center, CAPE [Center for Advancing Professional Excellence],” Reilly said. “We’re out of faculty office space, particularly for clinical faculty. We’re almost out of vivarium space and with the arrival of new research recruits on this campus, that’s a need that we need to address. Both of our main hospital partners on this campus, Children’s and University Hospital, are experiencing record volumes, and many times of the year are over-full and access to those services, such as operating rooms, is becoming increasingly challenging, given the growing demand on this campus.”

To address such concerns, several construction projects are expected to sprout this year.

UCHealth University of Colorado Hospital has announced that it will construct a new 11-story tower that will initially provide 103 additional in-patient beds and nine operating rooms with space for future growth.

On the Fitzsimons Redevelopment Community site, north of Montview Boulevard, new office buildings, an elementary school, a high school, apartments and a hotel are expected to be under construction.

“After the cranes have gone away on the east side of the campus, you will see a bunch of cranes going up on the west side of campus,” Reilly said. “For those of you who bemoan the traffic on campus now, this is as good as it gets for the next couple of years.”

The campus is not going to expand the amount of space dedicated to wet labs in the coming years because occupancy measures indicate that the existing amount of space is not optimally used.

“Our wet lab footprint will be the same as it is now. We may remodel a few areas, we may repurpose a few things, but there will not be a new wet lab building on this campus in the next six years,” Reilly said. “No. 1 we don’t need it and No. 2 we don’t have the money to build it. For those of you whose life exists in that wet lab environment, what you see is what you get. We have plenty of opportunity to grow and that will require the cooperation of everybody.”

To address education, the School of Medicine is re-evaluating its curriculum for medical students. With an emphasis on training physician leaders who can transform the health of diverse communities, the updated curriculum is based on three values: leadership, curiosity and commitment.

“Our collective judgement is that we need to change because the world of medicine is changing,” Reilly said. “We think that to equip our graduates with the skills they need to be outstanding physicians in 2030, 2035, 2040, we need to change our approach to medical education.”

That means revamping the integration of basic science into the clinical rotations, aligning teaching methods with the way students access information, informing students with better information about the business of medicine and the role of public policy in improving population health, and preparing graduates to work in teams.

“I think integrating advanced science courses provide a great opportunity for our faculty to meaningfully share their cutting-edge research in specialty disciplines with our students and, at the same time, exposing them to advanced clinical care in those areas,” Reilly said.

“This is a big deal – to change a medical school curriculum. There has been a lot of work done so far and there’s a lot of work left to do. We have had representation from all of our constituents, community members, students, faculty members, divided up into teams, and working together, rolling out pilots to test various concepts. Then, you will proceed into the full scale implementation phase.”

The changes to the curriculum will require a different level of involvement between educators and students. Technology has resulted in fewer students gathering in classrooms and lecture halls. Instead, students are opting to view that instruction on archived videos of the lectures.

“That’s been an adjustment for faculty,” Reilly said. “They’ve gone from being in-person lecturers to being TV performers.”

The changes to curriculum will refocus the relationship by emphasizing a longitudinal curriculum, a deeper tie between current scientific discovery and clinical care, and more lasting connections between learners and educators.

“We think that this longitudinal curricula will foster longer and more meaningful relationships between students and faculty, which will produce more professional satisfaction on both sides of that equation, the ability for faculty to more meaningfully assess students and write more meaningful letters of recommendations and assessments.”

The level of effort will be significant, but so will the outcomes. Pilot programming of the new curriculum will roll out in the next year. “The benefits obviously by our estimation outweigh the logistical hurdles or we wouldn’t be doing it.”

Another significant effort in the School’s educational programming is ongoing work with Colorado State University to open a branch of the medical school in Fort Collins. The School is currently negotiating a memorandum of understanding with CSU. The School also plans to increase the presence of students in clinical rotations in the Fort Collins area to test with there is capacity to support the rotations needed for a branch.

The School of Medicine has demonstrated a significant commitment to providing clinical care for underserved and economically disadvantaged patients.

“I want to talk about the commitment to the underserved and the care that patients that are economically disadvantaged receive from our faculty on this campus and at other locations because I think there’s a popular misperception out there that we don’t take care of poor people. And that’s not true,” Reilly said.

According to data from the state Department of Health Care Policy and Financing, which oversees the state’s Medicaid program, more than 140,000 Medicaid recipients received care from School of Medicine faculty. Reilly added that the number of Medicaid patients receiving care in 2018 increased 12 percent from the previous year, even as the total number of people on state Medicaid rolls was decreasing. Reilly displayed a map that showing that patients in every county, and nearly every ZIP code, in the state received care from School of Medicine faculty.

Under a program that provides additional federal Medicaid funding, the School of Medicine in 2018 developed a portfolio of investments that improve access and care quality for patients across the state. There were so many programs on the list that text was too small to read even when displayed on the giant screen during Reilly’s presentation.

“We’ve made a real commitment to not only the patients we get here on this campus, but to telemedicine and other ways to reach out to the state of Colorado to help Medicaid recipients get access to primary and specialty care.”

He added that a new partnership between the School and two federally qualified health centers, Salud and MCPN, will be establishing a center in Aurora to offer a home for care for some 80,000 Aurora residents who don’t have access to primary care. The site will also provide training opportunities for the School’s students and residents.

“It is our belief that if we meet the need with that patient population, we will not only help them improve their health, but we will reduce their need for acute care services and emergency room visits and that unneeded hospitalizations will be prevented.”​

State of the School