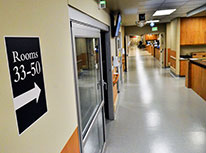 AURORA, Colo. – A major multi-center investigation of children with cystic fibrosis has identified a test that allows earlier identification of those at risk for cystic fibrosis liver disease.

The study, which includes 11 clinical sites in North America, was led by Michael Narkewicz, MD, professor of pediatrics from the University of Colorado School of Medicine and Children’s Hospital Colorado. The findings of the study are published today ahead of print in The Journal of Pediatrics.

The results reported in the article show that researchers could identify children at higher risk for advanced liver disease by using research-based ultrasound screening with consensus grading by four radiologists. The report is a four-year interim analysis conducted as part of a projected nine-year study.

“This is the first large multicenter study of ways to predict which children with cystic fibrosis are at higher risk for advanced liver disease,” Narkewicz said. “The findings show that we have found an important way to project which patients might develop cystic fibrosis liver disease. It also gives us clinical therapeutic targets for interventional therapies that could prevent the development of this liver disease.”

These research-based ultrasound exams relied on multiple radiologists reviewing the results. Narkewicz said clinically based liver ultrasound exams may not have the same predictive value. The research-based ultrasound tests are a next step after liver enzyme monitoring and could indicate an increased risk for developing advanced cystic fibrosis liver disease. Researchers are continuing to study the magnitude of the risk.

Twenty-five authors, including Narkewicz, are listed as authors of the article. Roger Harned, MD, associate professor of radiology and director of Pediatric Interventional Radiology, is the only co-author from the University of Colorado School of Medicine.