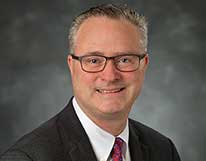 Brian T. Smith has been named Senior Associate Dean for Administration and Finance for the University of Colorado School of Medicine and Executive Director of CU Medicine, effective August 1.

Smith is joining CU from Mount Sinai in New York, where he is the senior vice president and chief operating officer for Mount Sinai Doctors and senior associate dean for clinical affairs for the Icahn School of Medicine at Mount Sinai.

Smith succeeds Jane Schumaker, who has served in both roles since March 2011 and who announced last year that she planned to retire when her successor was hired.

“We are grateful for Jane’s distinguished leadership for the past eight years and we are looking forward to Brian’s contributions in the years ahead,” said John J. Reilly, Jr., MD, dean of the CU School of Medicine and president of CU Medicine. “Our faculty practice and medical school are stronger today and that’s a major accomplishment because both were already national leaders when Jane joined us.”

Smith was born in New York and raised in the Bronx. He graduated from Manhattan College with a BSE in electrical engineering. He earned a Master of Health Administration degree from the University of South Florida in 1997.

“Brian brings strong strategic and operational skills to CU,” Reilly said. “Brian has led teams through growth and consolidation and we are confident that he has the experience and skills needed to address the challenges of today’s changing health care environment. He also understands the importance of the academic mission of CU and will make valuable contributions to those responsibilities.”

University of Colorado Medicine is dedicated to providing business operations and administrative support to nearly 3,000 University of Colorado School of Medicine clinical healthcare providers. Adjacent to the CU Anschutz Medical Campus in Aurora, one of the largest and most advanced academic medical campuses in the country, CU Medicine offers a variety of administrative and healthcare support career opportunities and serves as a resource for patients and physicians.