Welcome to the Family Medicine Newsroom. We hope that you find our stories instructive, engaging, memorable, and sharable! Are you a medical student, resident, doctor, or patient who would like to share a story idea?

Drop us a line

Sean Llewellyn, MD, is a second year resident in the University of Colorado Family Medicine Residency (UCFMR). He attended medical school at the Icahn School of Medicine at Mount Sinai in New York City. He has a PhD in Immunology. 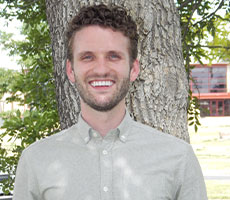 Llewellyn is a guy who does not like to stand still. He says he likes to be busy and to learn – constantly. That’s why, in part, he chose UCFMR. He says he was looking for an opportunity to practice medicine and innovate in health care. And, he found all of that here in Colorado.

“People are always looking for ways to better the care we give people. Whether it’s one person at a time – whether it’s a systemic approach through the medical system – or whether it’s through some health disparity or through health policy, there is always a way that people are trying to look to find ways to change to make medicine better and make doctor’s lives better and the lives of our patients better as well,” says Dr. Llewellyn.

Most recently, Lewellyn has been spending part of his residency time taking part in a medical journalism elective with ABC News. Yes, that ABC News!

He says that this particular opportunity is allowing him to hone his skills in communicating medical and scientific information in a simple and interesting way. Studies show that an alarming amount of people receive most of the medical education and medical information through social media and the internet.

Llewellyn says that’s fine, as long as there are medical experts and scientists behind those platforms and websites. But, unfortunately, he says that is not always the case.

“Social media is prompting people to attempt all kinds of bizarre so-called health treatments from diets to drinks, to home treatments,” says Llewellyn.

“It’s obvious that we as doctors need to catch up with the times to really educate patients because they are getting the education from people who do not have the education we have.”

As part of his elective with ABC News, Dr. Llewellyn met regularly with ABC news staff for an early morning planning meeting where with editors he reviewed plans for each news program.

When it came to medical content, like research studies, he was tasked with reviewing scripts for accuracy.

“I needed to synthesize that entire study – get the very basic information and say, yes we should report on this or no, let’s keep away this does not have good data or we need more data to really report on this,” says Llewellyn.

He was the behind-the-scenes-doctor. Quality control.

To date, he has written at least five stories and has been a contributor on several more that have been on used on-air and online.

Llewellyn now has his sights set on learning more about clinic administration and is in works to develop an elective that will allow him to shadow a clinic director. He says he is also making contacts with elected officials to set up yet another elective where he can act as a medical advisor on important legislation to improve health care.

But, he’s not leaving ABC News and medical reporting behind.

“They’ll pitch story ideas to me. If I am interested in it, I’ll pick it up and write a story on it. I can pitch different story ideas to them, as well.”

Lewellyn says that now, more than ever, it is vital that family physicians – like him – double down on communicating accurate, helpful, and healthful information to their patients. And, that means thinking out-of-the-box.

Will we see him someday soon on-air delivering medical education to the masses? Maybe. He’s already tossing around the idea of producing short TikTok videos that would deliver 30-second health and medical tips to all those scrolling through their smartphones.

“We need to learn how to break into those realms,” Lewellyn says. “It’s all about innovating to deliver the important information people need to stay healthy and meeting them where they are.”