With support from the CU School of Medicine, we’ve allocated funds to recruit up to 10 outstanding interdisciplinary research faculty from outside institutions over the next 3-5 years. The goal of this initiative is to catalyze new collaborations that bridge scientific and clinical disciplines within the department and the broader Anschutz research community, accelerating discovery in a variety of fields of interest to the department and campus.

Ideal candidates will be advanced assistant professors or early associate professors with publications in high-impact journals and a record of NIH or equivalent funding; R0-1 or equivalent awards. However, we are willing to consider earlier stage candidates with promising lines of investigation.

View the full RFA, or contact us to learn more and explore possible candidates:

2017/2018 - Interdisciplinary Recruits
Each of our recruits is outstanding in their field with proven expertise in a research area that already is or can easily become interdisciplinary in the Department of Medicine. Their work and the work with their teams will continue to enhance our overall DOM research mission. Below is a brief introduction to each of the individuals. Originally from the country of Georgia, Dr. Mamuka Kvaratskhelia [Ma-moo-kah Kva-rat-skay-li-ah] obtained his PhD at Moscow State University and worked for four years in the biotech industry before doing post-doctoral training in England, Scotland and in the U.S. at NIH/NCI. He then started his own research program at Ohio State University in 2003. Dr. Kvaratskhelia joined the faculty of the University of Colorado School of Medicine as a Professor in the Department of Medicine, Division of Infectious Diseases in August 2017.

He is an extremely resourceful and technically versatile biochemist, pharmacologist, and molecular virologist who has developed a very interactive research program that comprises substantial translational and basic science components. In just the past three years, he has published a paper in Cell, a paper in Science, and four papers in PNAS. He has published dozens of JBC papers. His basic science research encompasses RNA-protein and host-virus interactions. He has – unusually in the high-powered field of HIV basic molecular virology – successfully investigated wholly disparate parts of the HIV-1 life cycle (he is at the forefront of HIV-1 chromosomal integration and more recently HIV-1 particle assembly and interactions of the incoming particle with the complex cellular milieu).

HIV-1 integrase (strand transfer) inhibitors (STIs) are now preferred and extraordinarily good first line agents in the most current antiretroviral therapy regimens (e.g., dolutegravir and coming bictegravir). In addition to his pioneering research in key aspects of integrase and STI biochemistry, Dr. Kvaratskhelia has also used high throughput screening, medicinal chemistry and structural biology to bring forth a completely novel class of antiviral agents and move them to clinical development. These are the allosteric (“other site”) HIV-1 integrase inhibitors (ALLINIs). These new candidate drugs bind well away from the catalytic site where STIs bind. They bind instead to a cleft formed by the integrase dimer interface. Besides the elegant discovery trail that leads back to the integration cofactor LEDGF, the most exciting aspect is that they act mostly in a startlingly novel way by dramatically disrupting the choreography of viral particle assembly (i.e., they act on the other side of the life cycle from integration, producing highly aberrant particles that are non-infectious). They are now in active refinement and testing by a major industrial partner. Thus, the perhaps overused term “bench-to-bedside” truly applies to him and his program. He is robustly NIH funded, with multiple R01s and a just-renewed Program Project (P50) grant.

Dr. Kvaratskhelia was excited to move from a focused basic science department to a more expansive environment that includes our many HIV clinicians and clinical scientists as well as basic virologists and immunologists. His projects are strongly complementary to ongoing research at the University of Colorado SOM, including the ID Division, the Skaggs School of Pharmacy, the Department of Immunology and Microbiology, the Department of Biochemistry and Molecular Genetics, and the RNA Bioscience Initiative. He and his wife have three children and his youngest daughter attends Cherry Creek High school. 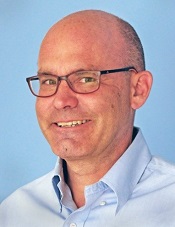 Eric G. Campbell, PhD obtained his undergraduate, masters and doctoral training at the University of Minnesota (Twin Cities) and completed a two year post-doc in health policy at the Mongan Institute for Health Policy (MIHP) at the Massachusetts General Hospital (MGH) and Harvard Medical School (HMS) in Boston. He then joined the HMS faculty in the Department of Medicine as an Instructor (1998-2003), Assistant Professor (2003-2007), Associate Professor (2007-2012) and Professor (2012-2018). He was named Assistant Director of the MIHP and also Director of Research at the Center for Bioethics at HMS.
Dr. Campbell’s primary research focus is understanding the nature, extent and consequence of academic industry relationships in medical education, research and clinical care. He also conducts research on issues related to professionalism in medicine, electronic health records, patient safety and other topics in health care policy. Dr. Campbell has been continuously funded by numerous R01 awards from the National Institutes of Health and grants from private foundations. He has published 107 original research articles over his career, including 8 in the New England Journal of Medicine and 14 in the Journal of the American Medical Association. Dr. Campbell has twice testified before the United States Congress on issues related to conflicts of interest in medicine and received the 2012 Health Services Research Impact award from AcademyHealth.

In April of 2018 Dr. Campbell joined the faculty of the University of Colorado School of Medicine as a Professor in the Department of Medicine, Division of General Internal Medicine, and Director of Research at the CU Center for Bioethics and Humanities. Dr. Campbell is leading the effort to build the empirical research capabilities and overall standing of the Center for Bioethics and Humanities, including by hiring new faculty, establishing a post-doctoral training program and providing pilot grant funding to existing CU faculty focusing on empirical research in bioethics and the health humanities. His personal research agenda at CU is focused on conducting high quality, extramurally-funded research at the intersection of health policy, health services research and ethics.

Topics he is already exploring with his new colleagues at CU include the role of marijuana as a treatment for chronic pain, metabolic bariatric surgery referrals for adolescents with severe obesity, and sexual boundary violations by health care providers. Eduardo Davila, PhD, joined the Department of Medicine/Division of Medical Oncology as a Professor of Medicine in August 2018 after being recruited from the University of Maryland, where he led the Cancer Immunology Program. Dr. Davila has been appointed to the Amy Davis Chair of Basic Human Immunology, and will serve as co-Leader of the “Tumor-Host Interaction” program in the University of Colorado Cancer Center, the only comprehensive cancer center in Colorado designated by the National Cancer Institute. Dr. Davila obtained his PhD from the Biomedical Sciences-Immunology program at the Mayo Clinic Graduate School, where he studied techniques to enhance antitumor T cell responses and was awarded a Post-baccalaureate Patient-Oriented Translational Fellowship from the National Institute of General Medical Sciences (NIGMS).

After serving as a post-doctoral research fellow in immunology at Mayo, Dr. Davila was on the faculty at Louisiana State University prior to being recruited to Maryland, where he was awarded both an Innovation Initiative Award and a BioMaryland Leading Innovative Faculty Entrepreneur Prize. Dr. Davila is funded by the National Cancer Institute and holds a VA Merit Award studying approaches to enhance immune responses to cancer. He will serve as Immunotherapy Director for the Division of Medical Oncology and spearhead program development for the Human Immunology and Immunotherapy Initiative (HI3). Dr. Davila has published in the Journal of Immunology, Cancer Research, Blood, PNAS, JCI, and other prestigious journals. He is a dedicated educator with a focus on increasing diversity in the biomedical sciences, including a Postbaccalaureate Research Education Program funded by the NIGMS.