Over a 30-year career shaped by a commitment to "thinking outside the box," Department of Medicine Chair David Schwartz, MD, garnered a reputation as a pioneer in the burgeoning field of genetics and epigenetics, having published more than 300 papers exploring the interface between genes and environment. As DOM Chair, he aims to help build a pipeline of physician-scientists and a framework for increased collaboration between clinicians and researchers that will place the department at the leading edge of a major paradigm shift - from one-size-fits-all medicine to "true personalized medicine." 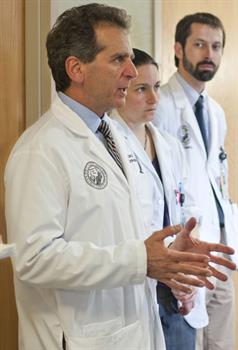 "I believe that medicine is at an inflection point, where we have the opportunity to take a great leap forward," he says. "But that can only be done at large medical centers with an intimate interaction between the clinical sciences and basic sciences, and the willingness to take risks. CU is uniquely poised to be able to do that."

Schwartz was born in 1953 and grew up near New York City, in the middle of Long Island, NY. After attending University of Rochester, he headed to University of California, San Diego to earn his MD, then on to Boston City Hospital, Harvard School of Public Health, and University of Washington for further study. While serving as director of the National Institute of Environmental Health Sciences (NIEHS) from 2005 to 2008, he spearheaded the creation of the Epigenomics Roadmap Initiative, a five-year $750M research effort to better understand basic mechanisms of development, and how environmental factors like diet and toxins can alter gene expression and influence health and disease. He also helped establish the Genes Environment and Health Initiative to develop genomic tools and instruments for better measuring exposures.

"The key question that I have been asking for the past 25 years is, why do some people develop disease when exposed to an environmental toxin, and other people don't? Instead of it being genes or environment, it turns out it is genes and environment. That has been a big shift."

Schwartz's research in pulmonary medicine and immunology has helped fuel that shift.

In one seminal paper in the journal Nature Genetics in 2000, he and colleagues at University of Iowa showed that people with a variant of the gene TLR4 are less likely to develop airway diseases, such as asthma, when exposed to endotoxins found in household and agricultural dust or polluted air. Variants in that gene also influence risk of infectious diseases and cardiovascular disease.

Another pivotal paper he published in 2008 in the Journal of Clinical Investigation showed that the diet of a pregnant mouse could affect epigenetic marks (chemicals that decorate DNA and influence the activity of specific genes) in utero, influencing the risk of its unborn offspring to develop asthma later in life.

A third paper, published by Schwartz and colleagues in the New England Journal of Medicine in 2011, found that pulmonary fibrosis (a deadly disease long attributed to repeated injury to the lung) is also linked to a common variant of a gene that codes for mucus production.

"This disease that we used to call idiopathic (unknown etiology) pulmonary fibrosis is largely genetically driven, whether it occurs sporadically or runs in families. But there are many people who have this gene variant and have just not been triggered by environmental influences to develop pulmonary fibrosis," says Schwartz. He believes that by better understanding the mechanisms that drive such environment-gene interactions, physicians and scientists can come up with more personalized treatments and prevention programs.

He landed in Denver in 2008 to take a post as a director of the Center for Genes, Environment, and Health at National Jewish Health. In January 2011, CU appointed him Chair of its Department of Medicine.