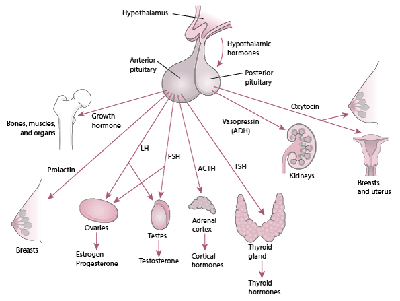 The University of Colorado Pituitary Tumor Program is one of the largest and most experienced multi-disciplinary pituitary programs in the country. The program, directed by Dr. Kevin O. Lillehei, Chair of the Department of Neurosurgery, has experience in the treatment of well over 2,000 surgical cases. In conjunction with Dr. Margaret Wierman, Director of the Pituitary Center, they have assembled a nationally recognized team to comprehensively evaluate your tumor and symptoms. The team includes specialists from neurosurgery, neuro-ophthalmology, neuro-pathology, neuroradiology, head and neck surgery, and radiation oncology.

The pituitary team is filled with many specialists from various fields.  Please click on the links below to learn more about our providers:

More About the Pituitary 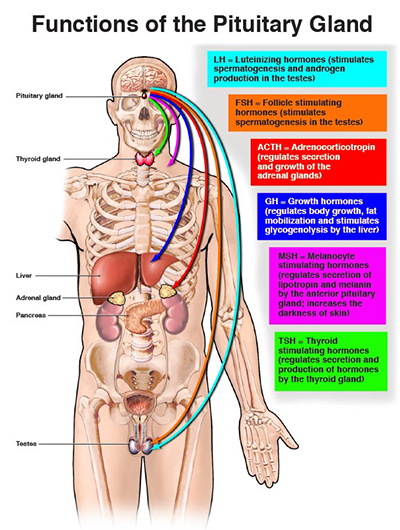 width, the pituitary gland is often called the "master gland" since it controls the secretion of the body's hormones. These substances when released by the pituitary into the blood stream have a dramatic and broad range of effects on growth and development, sexuality and reproductive function, metabolism, the response to stress and overall quality of life. The pituitary gland is thus at the anatomical and functional crossroads of the brain, mind and body.

Disorders of the pituitary can cause a wide spectrum of symptoms, both hormonal and neurological.

Pituitary tumors (also called pituitary adenomas) can result in hormonal overproduction causing serious endocrine disturbances such as acromegaly (excess GH), Cushing's disease (excess ACTH) or prolactinoma (excess prolactin). Other pituitary adenomas are non-functional or "endocrine-inactive," meaning that they do not produce excess hormones. Instead, as these tumors enlarge, they can cause compression of the normal pituitary gland leading to decreased or absent hormone production (hypopituitarism or pituitary failure), visual loss from optic chiasm or optic nerve compression and headaches. Pituitary failure may also result from bleeding into a pituitary tumor, pituitary or intracranial surgery, radiation therapy to the pituitary or head trauma. Other tumors that arise near the pituitary gland which can also impact pituitary hormonal function include Rathke's cleft cysts, craniopharyngiomas, meningiomas, chordomas, gliomas and epidermoid cysts.

Treatment involves a team of medical experts, possibly including a brain surgeon (neurosurgeon), endocrine system specialist (endocrinologist) and a radiation oncologist. Doctors generally use surgery, radiation therapy and medications, either alone or in combination, to treat a pituitary tumor and return hormone production to normal levels. 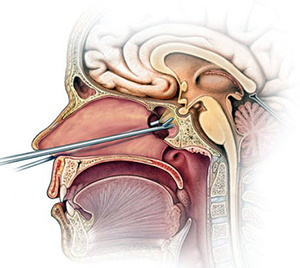 Surgical removal of a pituitary tumor usually is necessary if the tumor is pressing on the optic nerves or if the tumor is overproducing certain hormones. The success of surgery depends on the tumor type, its location, its size and whether the tumor has invaded surrounding tissues. The two main surgical techniques for treating pituitary tumors are: