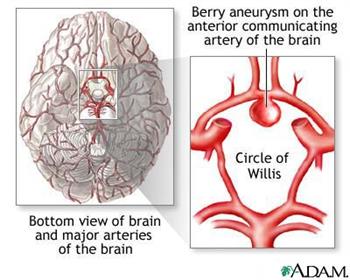 Aneurysm of the brain, also called cerebral aneurysm, is a common cerebrovascular disorder caused by a weakness in the wall of a cerebral artery or vein. The disorder may result from congenital defects or from preexisting conditions such as hypertensive vascular disease and atherosclerosis (build-up of fatty deposits in the arteries), or from head trauma. Cerebral aneurysms occur more commonly in adults than in children and are slightly more common in women than in men, however, they may occur at any age.

Before an aneurysm ruptures, the individual may experience such symptoms as a sudden and usually severe headache ("worst headache of my life"), nausea, vision impairment, vomiting, and loss of consciousness, or the individual may be asymptomatic experiencing no symptoms at all. Onset is usually sudden and without warning. Rupture of a cerebral aneurysm is dangerous and usually results in bleeding in the brain or in the area surrounding the brain, leading to an intracranial hematoma (a mass of blood-usually clotted-within the skull). Rebleeding, hydrocephalus (the excessive accumulation of cerebrospinal fluid), vasospasm (spasm of the blood vessels), or multiple aneurysms may also occur.

Emergency treatment for individuals with a ruptured cerebral aneurysm generally includes restoring deteriorating respiration and reducing intracranial pressure. Surgery is usually performed within the first 3 days to clip the ruptured aneurysm and to reduce the risk of rebleeding. In patients for whom surgery is considered too risky, microcoil thrombosis or balloon embolization may be performed. Other treatments may include bed rest, drug therapy, or hypertensive-hypervolemic therapy (hypervolemic hemodilution) to control vasospasm.