(November 2019)When one of the world’s most influential health research leaders announced this summer that he would eschew speaking on all-male scientific panels, Elizabeth McCullagh’s first thought was “we need more men like him.”

“The problem of ignoring women’s expertise can be solved if men recognize that this is not just a women’s issue,” McCullagh, PhD, said of Francis Collins, MD, PhD, director of the National Institutes of Health, who has challenged other science leaders to join him in encouraging diversity.

“We need allies, and he really stepped up as any ally.”

Amid growing concerns from women in science that their voices are underrepresented in the media and professional conferences, McCullagh, a postdoctoral fellow at University of Colorado School of Medicine Department of Physiology and Biophysics, and Kate Nowak, a scientist formerly with Colorado State University, launched the Request a Woman Scientist database in January 2018.

Sponsored by 500 Women Scientists, a Boulder-based nonprofit dedicated to making science more inclusive, the database contains the names of over 11,000 women who work in science, technology, engineering, math and medicine (STEMM) in 138 countries. All have agreed to be available to speak publicly about their expertise.

A paper co-authored by McCullagh and published in the journal PLoS Biology in April shows the database was accessed more than 100,000 times in the first year, and 11 percent of women who answered an online survey reported contact.

“I think the problem is so obvious when you see all-male panels,” McCullagh said. “But some people are in denial of the inequity.

“People don’t realize their own biases, and that’s part of the problem. You may think you’re asking the most experienced person, but is that true or is it just because you know them. Are they really the most qualified?”

With momentum building, McCullagh is encouraging organizers of large conferences to issue guidelines to help increase panel diversity to avoid what are colloquially called “manels.”

“They need to step forward and amplify this message, and put in a real effort to make people aware of the problem.” 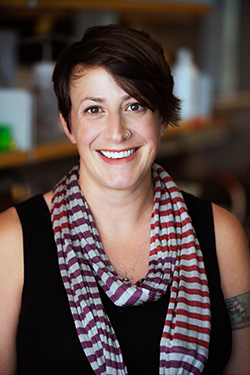 Some conference organizers say they struggle to find qualified women for panels because there are fewer women than men in many science-related fields.

Since the birth of her first daughter, Adelaide, two years ago, McCullagh realizes why that might happen. She calls it the Science Mom Journey.

After struggling with infertility, McCullagh gave birth nine weeks early. McCullagh returned to work once her daughter came home from the hospital, but she needed frequent breaks to pump breastmilk.

“There are huge barriers to keeping women in science. Motherhood is incredibly difficult, but if you are dealing with infertility or a miscarriage or postpartum depression, or if you’re going through IVF (in vitro fertilization), how in the world can you be productive? All this stuff impacts our lives, and we’re not supposed to talk about it, but it does affect your career.

“You think you can jump back in and be fine. But you’re just not going to do everything as well.”

Continuing to advocate for women in science, McCullagh has coauthored two articles in Scientific American: “Do Science. Pump. Repeat. How to improve scientist-moms’ breastfeeding experience,” and “Infertility, and the Leaky Pipeline, Difficulty in conceiving a baby should not be allowed to wreck a woman’s scientific career.”

On the Anschutz Medical Campus, she successfully lobbied to increase the number of lactation spaces. In Fort Collins, where she lives with her husband and two daughters, she started a 500 Women Scientists pod. Members have met with lawmakers to discuss parental leave and child-care policies, raised funds after Hurricane Maria for CienciaPR, a science, technology, engineering and math organization, and sponsored a get-out-the-vote effort.

The pod’s main event each year is a one-day conference called Expanding Your Horizons for middle school girls interested in STEMM fields.

“It’s great for the girls to see women who are leaders in their field running workshops. In middle school girls often get discouraged that we’re not smart enough or we’re not driven enough. Our pod helps with that.”

Sponsored by 500 Women Scientists, the Request a Woman Scientist database is posted online with the following statement of purpose:

We need more women's voices in the public sphere

Too often, high-profile articles, conference panels, and boards are filled with a disproportionate number of male voices. News stories are reported by more men by a huge margin, and this imbalance is reflected in how frequently women are quoted in news stories unless journalists make a conscious effort to reach out. Most keynote speakers at conferences are men. Panels are so frequently all-male that a new word evolved to describe the phenomenon: manels. These imbalances add up and reinforce the inaccurate perception that science is stale, pale and male. Even though women are a huge part of the scientific community and make up half of the population, women’s voices have been historically low or entirely absent in public spaces. These imbalances ultimately deny leadership opportunities to women in science, especially women who face additional forms of discrimination. It is time for a change.

The Request a Woman Scientist platform connects our extensive multidisciplinary network of vetted women in science with anyone who needs to consult a scientist for a news story, invite a keynote speaker or panelist for a conference or workshop, find a woman scientist to collaborate on a project, or serve as a subject matter expert in any capacity. Importantly, 500 Women Scientists is committed to diversity and inclusion, not just in our scientific fields, but in our society as a whole.