Giving Faculty the Tools for Success 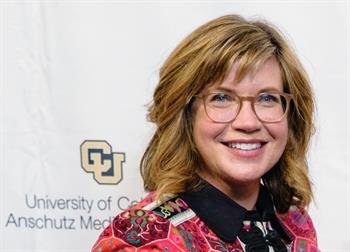 (November 2019) Anne Libby, PhD, brings an academic’s commitment to education and an economist’s insight into building value in  the careers of her colleagues at the University of Colorado School of Medicine.

With a PhD in economics and postdoctoral training in public health, she has studied how systems affect human lives, particularly those who are vulnerable or understudied such as the poor, children, and women. Through her efforts to build her own research career, she also discovered an ability to assist the professional development and education of peers, especially junior faculty who are starting careers in research and health care.

Currently, Libby is professor and vice chair for academic affairs in the CU School of Medicine’s Department of Emergency Medicine, where she has developed a system for helping faculty advance through the academic ranks, yielding such impressive results that the Academy for Women in Academic Emergency Medicine this year bestowed its Outstanding Department Award for promoting the recruitment, retention, advancement, and leadership of women in academic emergency medicine. Libby joined the CU faculty in 2000 and this year received the CU System’s Elizabeth D. Gee Memorial Lectureship Award, which recognizes efforts to advance women in academia, interdisciplinary scholarly contributions, and distinguished teaching.

Tell me about your background.  Where did you grow up and where  did you go to school?

I was born and raised in the Midwest, in Cincinnati, Ohio. I went to undergrad at Xavier University where I was an economics major. At that time, I thought it was so powerful that you could completely rework the wealth distribution of a country with taxes. I knew the way to do that work was to get a PhD in economics, so I went to Washington University in St. Louis and earned my PhD in economics.

It was also the era of health care reform during the Bill Clinton presidency, and it was supposed to be the future for economists.  The country was going to need to figure out how to pay for, organize, and finance health care in a new way and I thought that sounded very exciting, so I did my dissertation research on health. I got a postdoctoral fellowship at the University of California Berkeley in the School of Public Health and studied health economics and health policy.

How did you come to CU?

My postdoc advisor at Berkeley was the leader of a federally funded study to evaluate the Colorado mental health Medicaid capitation experiment. I was flying here to do data collection and to interface with the local Colorado health leaders. And every time I’d go back, I would say to my husband, ‘We should look at Colorado.’

I received a career development award from the William T. Grant Foundation, which funds most of your salary for five years. I was focusing on the intersection of mental health and other child-serving systems. To do that, you have to look at child welfare, juvenile justice, medical systems, and so I developed expertise in cross-system care for kids with mental health problems. There was a national network of mental health research centers. Ours was at Berkeley and UCSF, and one was at the University of Colorado School of Medicine, under Spero Manson. So I just called Spero and said, ‘Don’t you want me to work for you?’ And he said yes.

What did you work on when you first came to Colorado?

At the time, Spero had the biggest shop on campus doing health policy research, and so I easily folded in there. We came to Colorado and I was an assistant professor in the Department of Psychiatry in the Division of American Indian and Alaska Native Programs. It fit for me because I’ve always studied vulnerable populations and American Indians are among the most vulnerable.
When the Colorado School of Public Health was formed, the school was being built from the bottom up, every single class had to be  made, accreditation, everything. I was a full time researcher, 100 percent funded on grants, and I pretty much liked it that way. At the time, I had started collaborating with the outcomes research group in the School of Pharmacy. When Spero’s group moved to the new public health school, I was recruited to join the pharmacy outcomes research group.

What kind of work were you doing there?

We studied antidepressants and the treatment of depression and the risk of suicide. We did some influential work that dispelled the  myth that antidepressants were causing  harm at a population level.

When I taught public health and health outcomes, I had students do a drug formulary review. We made up cases for real drug classes like anticoagulants or biologics. The students did the analysis for efficacy, safety, special populations, how easily should you make access to this, what should be the payment structure, how do you economically value treatments. We implemented several new community volunteer activities. We would have students sit with new Medicare Part D recipients, enroll them, and then put their drugs in the Part D calculator to figure out if they could safely save money by looking at the formulary structures they were enrolled in. It helped the patients and it helped the students as future health care providers.

Most people come into medicine and science because they don’t want to deal with business. They want to heal, they want to study, derive knowledge. They don’t want to do money stuff and it’s shocking to realize that health care is a $3 trillion [annual] business. If providers don’t understand what it costs and what patients face, how can we together protect each other and make sure everybody gets what they need?

I like the way you said this. You can still do work that touches everybody’s lives, even if you’re not the person directly providing the patient care.

I was never called to be a direct care provider, but I appreciate those who do! I have also had a parallel path in my work. While I was trying to do my research and get my grants funded, I would meet other researchers who were doing
that too. There was a group putting together a training program, a mentoring program, for early career faculty trying to get their first grants. That was 16 years ago and it’s still going strong.

We train, intensely mentor early career researchers who want to make their lives here on the medical campus doing externally funded research in clinical or outcomes research. It has been really transformative in my life because I think most physicians don’t get extensive research training like a PhD does. Even if you have a PhD, it’s usually as a postdoc that you learn how to be an externally funded researcher—you learn how to write grants, run a team, do it again, do it again, do it again. If you’re lucky. I found a major partner in the Center for Women’s Health Research whose missions match mine— mentoring, education and research. Judy Regensteiner, PhD, the center director, and I have multiple collaborative grants to mentor and train early career researchers.

So researchers often learn by osmosis rather than by actual mentorship?

Correct. Many of the absolute best researchers aren’t teachers, so they can’t say in words what their process is. It’s an apprenticeship, just ‘Do what I do. Watch me.’ So I kept finding myself in this position where I can see the need and can explain it in words they understand. This process started with clinical faculty scholars, where we teach the art and science of getting grants, establishing scholarship, running projects, doing it again.

As we did that, it uncovered more needs because early on we could see that there’s a set of missing skills. I would read a book like Jim Collins’s Good to Great and I would teach it in words they would accept. Most physicians are totally put off reading examples of grocery stores, but if you explain it to them in terms of a clinic or a research team, then they will listen. I started new training programs in mentoring skills and in leadership.  My current chair, Richard Zane, MD, was enrolled in our advanced leadership program and recruited me to develop his faculty in emergency medicine. He is a visionary leader, and his support helped me take this work to the next level.

How do you help your colleagues?

New investigators make small, but extremely consequential mistakes. They might horde the funds because they’re trying to save for a rainy day. They don’t know if they’re going to get the next grant, so they don’t spend and therefore they don’t execute the scope of work. Or they overspend, don’t quite keep track, and suddenly they’re out of money and don’t meet the scope. Or they spend in the right order, but on the wrong things, or the wrong people, or so many things that have nothing to do with their science. These mistakes threaten their ability to succeed in careers they’ve devoted many years to build. And for us as a society, this is a major loss to human potential and to the scientific workforce.

So that experience has turned into a major focus of my life: training people, mentoring people in all the professional skills they need to be successful to build research careers. Not just the science, not just the grants, but the management and leadership skills it takes to make it. It’s never one big thing, but a thousand little things. The ‘sink or swim’ system leaves extremely talented people without the tools they need to succeed, tools that can be taught. We want these people to solve the most important puzzles in science and medicine. I want these people to take care of me and my family and make the world a healthier place, so I want to help them make it in academic medicine.