(May 2020) Janet Corral, 53, stands on the mobility platform at UCHealth Physical Therapy and Rehabilitation Clinic – Stapleton. She unweights herself with her hands on the stainless-steel rails running the length of the apparatus. Her black New Balances rise and fall as she slowly and gingerly walks in place. Guy Lev, the physical therapist who leads the rehab clinic, observes and corrects. He’s focusing on her posture, and so is a visitor who, like Lev, has a doctorate in physical therapy. Ruud Leijendekkers, in from Radboud University Medical Center in the Netherlands, has long experience in helping leg amputees walk again – as does Lev. Corral, though, is no ordinary above-the-knee amputee.

The black shoe and matching sock on her left leg gives way to the metal, carbon fiber, and plastic of a prosthetic. Its trim chocolate-brown calf yields to a metallic knee joint; above that shines a short stainless-steel post. The distinguishing factor with Corral’s robotic augmentation resides just above this. The post does not disappear into the usual bucket accommodating the residual limb – the bucket’s technically called an ischial containment socket – but rather connects to a metallic rod that disappears into her upper thigh. 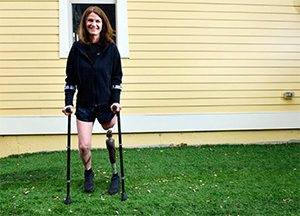 Janet Corral walks on the artificial turf outside the house she rented for three weeks after her second surgery. It’s a good place to practice walking on uneven surfaces, she says.

Six days before, on Nov. 5 at UCHealth University of Colorado Hospital on the Anschutz Medical Campus, University of Colorado School of Medicine orthopedic trauma surgeon Jason Stoneback, MD, connected the rod now disappearing into her leg to a titanium implant he had installed in Corral’s femur two months before that. It’s called osseointegration, and it promises to free Corral from the pain and limitations of her standard socket prosthesis.

Corral had been a student of the procedure for years before reaching out to Stoneback, who leads UCHealth’s Limb Restoration Program and is now one of the few surgeons on the planet doing osseointegration surgeries. Most of the others are overseas – hence Leijendekkers’ presence here in Denver’s Stapleton neighborhood. The Dutchman notices Corral leaning forward slightly more than he would like.

“Imagine walls in front of you and behind you,” he says, gently repositioning a hip and a shoulder.

Corral does so, checking her own form in a full-length mirror someone has tolled to the end of the apparatus. For 38 years she has walked with a socket prosthesis; now she must unlearn what kept her vertical and rebuild withered muscle. She continues to lift alternating legs to the two physical therapists’ satisfaction. She may be going nowhere at the moment, but she has already come a very long way.

Corral was too young to remember her father secretly building a raft of old pallet boards in their backyard near Cuba’s southern coast, or the risky open-ocean voyage she took with her parents and four siblings to Guantanamo Bay, where the family sought political asylum in 1968. They ended up in Miami, where they became part of a vibrant Cuban-American community. The kids grew and thrived.

In 1981, Corral was a freshman track standout at St. Brendan High School in Miami. She had already broken the school high-jump record when nagging pain in her left leg led her to a doctor. The diagnosis was a shock: she had bone cancer. It would be, as she
put it, “my leg or my life.”

They amputated mid-thigh, and Corral soon learned what essentially everyone who has ever worn a socket prosthesis well knows: they are generally uncomfortable and often painful, whether the prosthesis itself is wooden – as Corral’s first one was – or the microchip-driven robotic wonder of a C-Leg. The residual limb swells or contracts with temperature, hydration, the maturation of the limb, weight gain or loss, and other factors. Miami’s humidity made the connection between leg and socket so slippery that it made it hard to keep it on for more than an hour or so – and ultimately led Corral to relocate to California’s drier climate. She developed bone spurs at the end of her residual limb, which stabbed with each step, and sebaceous cysts in the upper thigh from being sheathed in a suffocating suction cup. Like many other amputees, she avoided walking except when she had to. But comfort isn’t the only problem with socket prosthetics.

A natural limb has firm connections – bones and cartilage – all through the kinetic chain. The residual limb of an amputee, in contrast, has the thick padding of muscle, fat and skin at its terminus. Below that are soft materials such as fabric and silicone liners in the socket itself –all needed to make wearing the prosthesis tolerable. The result is a mushy interface between human limb and prosthetic leg, making for a sloppy, unwieldy, unresponsive connection. It makes the act of walking like playing piano with ski gloves on or giving a speech with a mouth full of peanut butter.

When Corral met another amputee who walked easily and comfortably after osseointegration she began searching for the surgery.

“I was blown away when I saw his robotic setup and immediately knew I wanted it too,” Corral says.

Teeth and much more 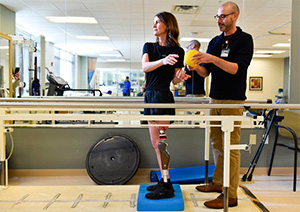 Osseointegration has an interesting history. It was pioneered in Sweden where a physician recognized the ability of the human body to grow bone into the porous surfaces of titanium implants and applied the insight to dentistry. All those who chew with the popular, superior alternative to dentures owe a debt of gratitude to this insight.

The technology was then carried from the mouth to the limbs. In 1990, the first osseointegration surgery was performed in Sweden. A few others in Europe, Australia and elsewhere have since followed. In Australia, more than 500 osseointegration surgeries have been done. The more Corral read about osseointegration, the more she was drawn to the idea of doing it. Yes, the initial surgery was equivalent to, as she put it, “another amputation,” and the idea of a metal post forever poking out of her thigh took some getting used to, and the recovery and rehabilitation would take months. But once she was through it, she would be able to walk for miles with a normal gait, without pain, with extraordinary control, and with vastly improved proprioception – the ability to feel and thus react to what she’s walking on.

As an orthopedic trauma and limb-restoration specialist, Stoneback was in the rare position of regularly working with amputees – he knew their challenges well – and having developed the specialized surgical expertise upon which to build an osseointegration-surgery practice.

The surgery, which takes perhaps two hours, requires extensive training and experience along with a well-trained team to support patient recovery. It is very similar to, say, one required to put the victim of a serious auto accident back together – another Stoneback specialty. Osseointegration shares its highly exacting nature with that of limb restoration surgery. The surgeon must understand the quality of the residual limb’s bone, different implant and techniques available, how much of the bone to remove to ensure the best fit, how much titanium one should implant for an optimal performance, how much soft tissue  to leave in place, and more.

The complexity doesn’t abate after surgery. The angles of the attached prosthesis must be precisely calibrated and the limb itself adjusted for a perfect fit. If not, the patient risks back pain and long-term joint damage above the prosthesis. As patients’ gait changes with increasing strength or other factors, prosthetists must make adjustments over time. Patients must receive specialized, intense physical therapy, as well, and the team must have the resources to screen patients (among many other criteria, those who aren’t good candidates for major surgery can’t receive orthopedic osseointegration). 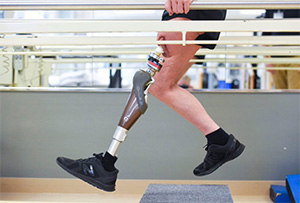 Osseointegration provides a direct connection between Janet Corral’s C-Leg and her femur.

In early 2017, Stoneback set off on a journey of his own – a quest to bring osseointegration to Colorado. He met and trained with world leaders in osseointegration surgery; he trained on the procedure in the Netherlands and visited Walter Reed National Military Medical Center; and he organized a team including himself, a nurse navigator, a psychologist, Lev and other physical therapists, and the highly regarded Denver prosthetist Christopher Hoyt.

He got buy-in from CU and UCHealth administrators. His team filtered through dozens of applications that rolled in from all over the country and beyond. And in September, Stoneback did the first of seven osseointegration surgeries on a handful of patients – Janet Corral among them.

Corral’s sister Jacqueline Corral flew in from her home in Key Lago, Fla., and would stay with her from the second surgery – a 15-minute outpatient procedure to attach the stoma (which would protrude from her leg and anchor the prosthesis) to the titanium implant now firmly enmeshed into her femur – until Nov. 27. Filling that time would be three weeks of daily rehabilitation in Stapleton plus additional rehab at the Airbnb.

“It’s always been miserable living with the prosthetic leg – always an issue, day after day,” Jacqueline says. “I see her happier now. She knows that the future is going to be what she’s been working towards for a long time.”

Nine days later, Corral is back in Stapleton for rehab. She and Jacqueline wear matching black T-shirts Corral designed – there’s
a small UCHealth logo on the front and #Robotajanet on the back. Her Instagram and Facebook sites host a growing trove of stories about osseointegration experiences. UCHealth physical therapist Lee Bernhardt leads her exercises today; the Dutch advisors are back in Europe.

She still uses forearm crutches – and will for weeks yet – but she moves faster now, with more deliberate, speedier motions and no hint of the tentativeness evident just a few days ago. She stands on a three-inch-thick, squishy-blue foam square designed to challenge her balance. Bernhardt hands her a 2.2-pound soft-rubber ball and has her lift it with her arm straight out, then to the side. Her biological right leg quivers in constant adjustment as she does; her thigh and core muscles are doing the same, though invisibly, on the robotic side.

She does a few other exercises in the confines of the mobility platform and then grabs her forearm crutches. Out in the room, back and forth she walks, studying her ambulation in a mirror at the far end of her 10-yard trip. For the first time in 38 years, she can feel with each step that the surface is tile, carpet, gravel, or snow. “I can feel it all,” she says.

Her sister has seen the progress, too.

“You’ve got the mechanics down – can you go a little faster?” Bernhard asks. “Like you’re going somewhere?”

Corral picks up the pace to that of a window-shopping stroll. The crutches seem mainly for balance. She has come so far – and she is, without a doubt, going somewhere.

This article was originally published in UCHealth Today on Feb. 3, 2020.