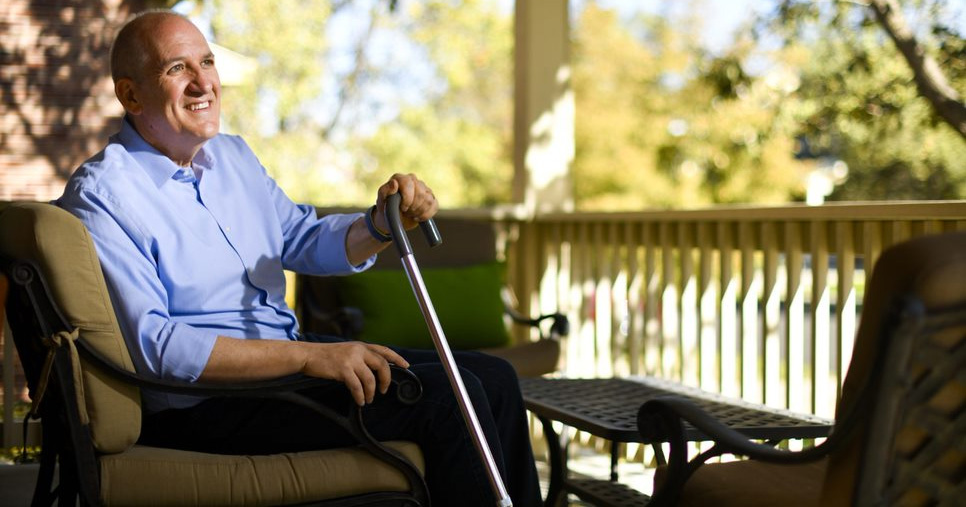 Jerry Oksner is recovering after suffering a debilitating stroke at the hospital where he worked. Colleagues became caretakers and saved his life. Photos of Oksner by Cyrus McCrimmon for UCHealth.

Building a Team, Not Just a Building

He looked down at the non-responsive arm next to his body. It was his arm no doubt, but it was as if the limp, pale skin and bones were a child’s toy box castoff and not his own strong, capable hand.

“All I wanted to do was put the puppet on and move it,” said Oksner, who was then in the rehabilitation and therapy unit at UCHealth University of Colorado Hospital on the Anschutz Medical Campus.

He focused, trying to will his right arm to budge and, just like that, “I moved my wrist,” he said, happily recounting the memory.

“Here it was, the middle of the night and I couldn’t tell my family what was happening,” said Oksner.

Just 15 days earlier, Oksner was driving toward UCHealth Highlands Ranch Hospital, where he is the director of facilities management. His nostrils and lips began to feel “tingly,” Oksner said.

“I thought I maybe had food poisoning or some kind of allergic reaction from lunch.”

By the time Oksner arrived at the hospital, the 57-year old knew something wasn’t right. He cautiously made his way down the hospital’s gleaming, cream colored hallways, rounded a corner and entered his office. As he had many times before, he settled in among the architectural and engineering drawings and the giant sticky notes detailing the hospital’s to-do list: review elevator timing, lead a window-cleaning meeting, visit the building’s structural crawlspace, and investigate current water pressure. After all, the hospital had opened on June 18, barely a month earlier.

When he sat down in the chair at his small round work table, he recalled thinking that his chair was broken. His world tilted.

“I couldn’t move,” Oksner said. “I heard a knock at my door and I couldn’t speak.” 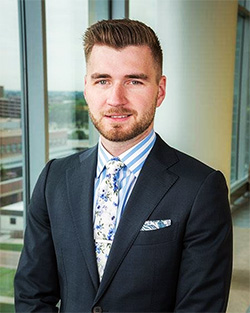 Brandon Pope, MD, assistant professor of neurology, happened to be in the hospital on his day off checking on patients when a hospital administrator suffered a stroke

David Leslie, then vice president of operations for Highlands Ranch Hospital, was walking back to the hospital after lunch and decided to call Oksner and ask if the two could briefly meet. Not five minutes later, Leslie peered through the door’s narrow window and knocked. The door was locked but Leslie could see Oksner seated at his desk.

“I assumed he was on the phone so I used my master key to let myself in,” said Leslie who glanced at his friend’s face. Oksner was trying to talk but his speech was garbled, he had a confused look on his face, and he was slumped to one side.

“It was a stroke, I knew it right away,” said Leslie. “I also knew there was a wheelchair just around the corner. I ran out of the office, grabbed it and got knees to knees with Jerry. I hoisted him up into the chair and started pushing him as fast as I could down the hall toward the Emergency Department.”

Leslie is a self-described emotional guy. He gets choked up pretty easily, but in the next moment he could chortle buoyantly, almost like a kid giggling at a knock-knock joke.

“Man, those wheelchairs can sure handle corners well,” he said laughing.

Brandon Pope, MD, a neurohospitalist and assistant professor of neurology at the University of Colorado School of Medicine, happened to be rounding in the ER on his day off, when Leslie charged past, pushing the wheelchair.

“When he said he had a stroke patient, I thought he was kidding,” said Pope.

“He’s right here,” Leslie said breathlessly, pointing to the man in the chair.

Leslie, a nurse with two-plus decades of experience, appreciates the astonishing power of modern medicine. And yet, he says, “that day there was definitely an element of divine intervention.

“The fact that I showed up in his office when I did, the window in the door, the wheelchair, and a top-notch neurology guy just standing there at that moment on his day off.

“I mean, it’s hard to see it any other way because too many things aligned in the most perfect way.”

The ‘Beverly Hills’ of the Brain

Oksner had suffered what’s known as a “lacunar stroke.” This type of stroke occurs when arteries that carry blood to the brain get blocked. Oksner’s blockage occurred in the “pons region.” Latin for bridge, the pons area is small but critical. Functions including coordination, strength, sensation and speech all travel from the brain stem to the brain cortex on fibers that bundle together and flow through the pons.

“It’s a small area and real estate is expensive so when something in that area gets damaged, it will be noticed,” said Pope.

With strokes, time is your enemy.

“For the most part, these kinds of strokes go from zero to 100 very quickly,” said Pope. “What Jerry felt – the tingling – was most likely an early symptom.”

The team administered the National Institute of Health’s stroke scale to measure the severity and help determine treatment. Later stroke experts use the scale to quantify a patient’s improvement.

The higher the score, the more severe the stroke. 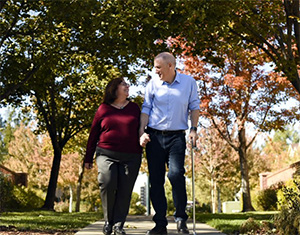 Stroke survivor Jerry Oksner is recovering after having suffered a stroke at UCHealth Highlands Ranch Hospital. Thanks to quick care, Jerry is recovering. Here, he goes for a walk in his neighborhood with his wife, Judy.

Since August 2018, Oksner worked countless hours at Highlands Ranch Hospital. He knows every inch of its 462,000 square feet. From installation of carpets and floors to elevator inspections and security testing, Oksner was fond of saying, “we turned a construction site into a hospital.”

All that work meant long hours away from home, which sometimes concerned Jerry’s wife, Judy.

The Oksners are empty nesters and Judy longed to enjoy some spontaneity, like occasionally battling for the top score on the vintage yellow pinball machine in their living room. She was especially looking forward to a weekend getaway once the hospital was open and running smoothly.

But Oksner loved his job and the idea that with each finishing touch – a crisp, clean sheet snapped onto a bed or testing the life-saving overhead paging system – the Highlands Ranch Hospital team would be closer to providing extraordinary care to its patients. Soon the community would benefit from a world-class facility staffed with talented professionals.

It’s unusual to open a brand-new hospital – and to have the chance to see the structure come alive as staff members bonded before the first patients arrived. Employees marked countless firsts: the inaugural, symbolic shovelful of dirt, the first new baby born, and the first ER patient.

Unbelievably, Jerry Oksner became the first to be treated in the hospital for a stroke.

From Colleagues to Caregivers

Jennette Bergstrom, chief nursing officer for Highlands Ranch Hospital, her voice shaky, barely holds back tears when she describes the moment she realized her friend and colleague was in her ER.

She remembers holding Leslie’s hand while Oksner lay in the trauma bed, pale and sweating. She remembers thinking about the team who work for Oksner and the way he intently listens in their meetings, his shoulders hunched slightly. She remembered the time he helped her to her car during a torrential rain squall, umbrella protesting in the lashing wind. He even swooped down to fetch her shoe from a muddy puddle.

“Seeing Jerry in our trauma room hit home, but I had such confidence in the team and their professionalism,” Bergstrom said.

Chelsea Carlson, Oksner’s ICU nurse, acknowledged that the mental wall she usually puts up, the one that keeps her head in the game when treating a sick patient, threatened to crumble when she realized the patient was her friend. The two worked side-by-side during comprehensive simulations of essential procedures and systems.

Highlands Ranch Hospital staff practiced treating mock patients with illnesses like heart attacks, broken collar bones, burns, cuts and of course, strokes. Oksner attended many of the rehearsals, scratching building-related notes on a tiny, spiral notepad. Like his coworkers, Oksner wanted to be sure the building’s complex systems were ready for any medical emergency. Like a prop in a theater production, the building plays an unheralded yet vital role.

“It’s easy for nurses and docs to just assume that monitors will work and there will be hot water,”
said Carlson. “Jerry and his team made sure they did, every time.” 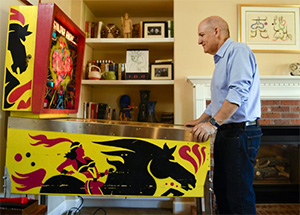 Jerry Oksner, who suffered a stroke in the hospital he helped build and open, plays pinball on a vintage machine he and his wife own.

The stroke affected Oksner’s right arm and leg, leaving that entire side immobile. It was difficult to sit up, cut his food, speak clearly, and impossible to maintain his balance.

Treating a colleague in your own medical facility is rare, said Kathy Shockley, rehab services supervisor. “It’s humbling, too, to suddenly rely on your coworkers to stand or toilet and yet Jerry was kind, gracious and vulnerable.”

“Being a patient,” said Oksner, “gave me unique perspective.”

“Having a stroke isn’t the way I would have chosen to find out what it’s like to be on the receiving end of extraordinary care but I did.”

And during those four days in the ICU, Judy came to understand how her husband had helped create more than a building filled with sophisticated equipment. He had helped shape a culture of collaboration and compassion among his co-workers. She could see the staff’s unwavering commitment to caring for others only deepened during long hours at the hospital. Camaraderie shone brightly on July 22 and during the days that followed.

“We had so many visitors,” Judy said. “I would grab a soda in the cafeteria and the cashier would ask about Jerry.”

That’s not to say Oksner took his work hat off entirely. While lying in bed, he made mental notes about a wall scuff that needed a touchup and adjustments to the room’s mechanical equipment. Diane Cookson, president and CEO of Highlands Ranch Hospital, told Oksner his job would be there when he was ready to return.

This article was originally published in UCHealth Today on Nov. 20, 2019.