Communication Is the Procedure 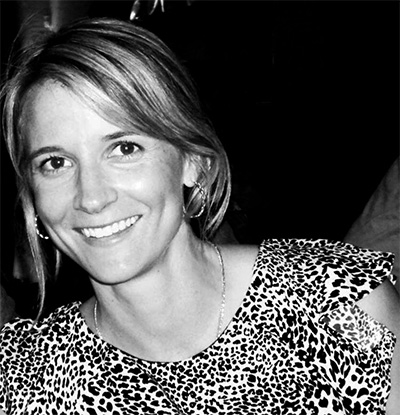 A rare social scientist on the School of Medicine faculty, Candrian, an assistant professor of medicine in the Division of Internal Medicine, focuses on improving the quality of elder care for the LGBT community and their loved ones.

“With a PhD in communication, I knew I would never be able to affect the disease prognosis or treatment trajectory, but I really began to see that I could make a difference with communication, and really begin to change the way people were talking and listening to each other,” said Candrian.

The settings where Candrian works – hospices and long-term care facilities – have not historically been especially attentive to the specific needs of LGBT patients and residents and their partners. The result is a disconnection between loved ones with devastating consequences.

“If a person’s center – who they truly are, who they truly love – remains invisible, ignored, devalued or otherwise negated, quality of care delivery can be compromised by excluding caregivers and families of choice, which is tragic particularly at the end of life,” Candrian wrote in a grant proposal for funding a project to develop communication training for hospice nurses.

Esther Lucero, a participant in a focus group for Candrian’s work, described a pervasive don’t-ask, don’t-tell culture that has defined her experiences with the health care system and her living accommodations when her partner died of a rare form of leukemia. “No one was ever rude,” she said, “As long as you were a friend, it was fine. We generally didn’t talk about our relationship, but you couldn’t be who you were, just holding her hand.”

Candrian said such experiences should be addressed by changing the way people interact at the beginning of their involvement with assisted living centers, hospices, and other care settings.

“It does become a clinical issue,” Candrian said. “She can’t get proper bereavement. She can’t get proper grief support. The root of it is a communication issue. If that conversation had started differently: ‘Who’s the most important person to you? Who do you want to have next to you in this room?’

“I think the outcome could have been different and, for so many of them, they’re usually not asking for the latest and greatest treatment, it’s really to be included and to be part of it. Changing the communication, that behavior change, can be the difference, particularly for this population.”

Changing behavior, though, requires an understanding of the current conditions and then designing interventions that could improve the interactions.

“The disparities are well-documented among older LGBT adults,” Candrian said. “We don’t have good data because we don’t collect sexual orientation and gender identity information like we do race and ethnicity. That makes it hard to measure and even recognize this population, so part of this is to start having hospices routinely collect this information.”

Even collecting the data is a challenge because many older LGBT adults have endured a lifetime of bias that shapes their behavior.

To pursue her work, Candrian has gathered letters of support from the National Hospice and Palliative Care Organization and SAGE (Services and Advocacy for GLBT Elders). She has also received grants from the Cambia Health Foundation, the National Institute on Aging, the Colorado Health Foundation, and the NextFifty Initiative that aim to create assisted living communities that are more inclusive, to improve advance care planning, and to guide hospice admissions interactions.

Part of Candrian’s approach is to get people together and listen to their experiences. Her current project aims to gather six focus groups of hospice professionals, older sexual- and gender-minority adults and their caregivers to discuss how sexual orientation and gender identity issues are currently handled. With that information, Candrian wants to develop a training that creates respectful end-of-life care settings. She would then pilot test training for hospice nurses.

“Just slapping on a nondiscrimination policy, slapping on a safe place sign is not the kind of change that is going to actually lead to deep cultural change,” Candrian said. “I really do believe that changing the communication and changing the behavior first will be far more effective than going immediately toward the policy. At least for the LGBT community.”

Stanley Deetz, PhD, professor emeritus at CU Boulder, was Candrian’s dissertation mentor. He describes the approach as essential for the kind of change that Candrian is aiming to make.

“Buy-in comes from the hard choices, not from packaging messages,” Deetz said. “She’s been able to keep the question at a personal level. When you do that, people will agree you should help people.”

Candrian transferred to CU Boulder after playing soccer “day and night” at Arizona State University. She decided that she was missing too many big events in life while she was so dedicated to athletics. She ultimately earned three degrees from CU Boulder, including her PhD in communication.

During her studies, she began volunteering at a local hospice.

Her volunteer experience and interactions at the local hospice led to several questions. Were people able to participate in the conversations about their care? Were they able to express who and what mattered to them? What happened when they were too ill or fatigued, when staff was overwhelmed? How did literacy, age, religion, sexual orientation affect the discussions?

Just slapping on a nondiscrimination policy, slapping on a safe place sign is not the kind of change that is going to actually lead to deep cultural change.

Conversations with another mentor, Jean Kutner, MD, MPH, professor of medicine, prompted Candrian to explore the issues more deeply. She met Kutner on a bench outside an emergency department, where Candrian had been shadowing staff to observe the way decisions were made around the end of life.

The discussions with Kutner prompted Candrian to think about how to pursue her interest in the role of communication in patient care.

“It was Jean, too, who said, ‘You’re not going to be able to do meaningful and authentic work unless you bring yourself into it,’” Candrian said. “And from that moment, I felt like I could do what I wanted to do, which was to address the enormous disparities faced by the LGBT older adult community. I felt like everything came together because I felt responsible for my community, and I felt like I could actually do something about it with my background. I know there were other people doing this work. But I thought, ‘If not me now, who else is going to do it?’ I came to really see research as a form of advocacy too.”

Candrian joined the School of Medicine faculty in 2014. She has worked with Kutner at the Palliative Care Research Cooperative Group, a national interdisciplinary research community committed to advancing rigorous palliative care science and improving care for people with serious illness. Candrian also has expanded her scope of work to include other settings, such as assisted living, Alzheimer’s care groups, and grief counseling support.

“There’s not an LGBT-specific widows of wives or any LGBT support group, which is kind of mind-blowing in 2020,” Candrian said, noting that there’s no organized group for patients with Alzheimer’s who are LGBT. The result can be a double coming-out without an organized support structure to help. “I think there is a real need for resources that are designed for and by the community.  I want to leverage this work to address those needs too.”

There are always new opportunities to use communication for healing and comfort, to provide better care.

“She brings perspective and rigor that really pushes the discipline forward,” Kutner said. “She is highlighting really important practical issues. She started with communication at hospice enrollment and I’ve been watching her find her voice. She has become a voice for advancing how LGBTQ issues are addressed and she is shining a bright light on our blind spots with regard to them. She is a true national leader on these issues. As a mentor, I’m learning from her.”