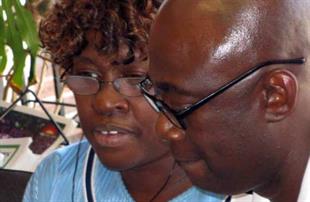 The hairdryers are already running full blast on this hot, sunny morning as Stanley Thomas and Moustafa Zien begin unpacking medical supplies onto a cardboard table near the front door at Winning Coiffures.

Thomas has been coming to this East Colfax Avenue salon in Denver for three years, so the customers greet him warmly. They don’t need to be told why he and Zien are setting up.

“I thought you were giving away money,” one woman says with a wink, on her way back from the . Wrapped in a plastic cape and a shower cap, she sits between Zien and Thomas. “You’re a jewel,” she says, gently squeezing Thomas’ arm.

As Zien begins doing her blood work to gather glucose and cholesterol numbers, Thomas asks questions about her health. Soon, she is asking him about his family.

“I don’t have to ask them many questions,” Thomas says. “They tell me most of what I need to know while we talk.”

Shawn Davis, development director of CPC, the newest member of the Anschutz Medical Campus neighborhood, ran a similar program that merged with the Denver Health program three years ago. He said his group looked at state statistics on obesity and cardiovascular disease to determine which populations were most in need. School of Medicine Dean Richard Krugman and other faculty help shepherd programs like Solutions as members of the CPC board. 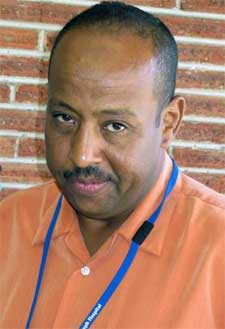 “You have to use a community venue that people trust,” Davis said. “Barbers have a lot of influence. If you’re in the chair, and the barber asks, ‘Have you been screened yet?’ Normally you would say, ‘That’s a good idea. I’ll go to the doctor next week.’ But if the barber says, ‘You don’t have to wait. You can do it here.’ They’re more likely to do it in that case.”

“We talk to them about motivational interviewing,” she said. “We walk them through the change cycle so they can listen to their clients and give appropriate messaging.”

The training helps barbers and beauticians, too. She says one barber came to class, learned he was at high risk and headed straight to the doctor.

“He actually had a cardiac event,” Whitley said. “He’s lost a lot of weight now and changed his life. We’ve also had individuals who received their risk assessment and did nothing, and they’ve died.”

Rosalyn Redwine’s story is less but makes her a good saleswoman for the program.

“I was on blood pressure medicine when they first came here, but I’ve weaned myself off,’ said Redwine, the owner of Winning Coiffures. “I was able to watch my diet and exercise. My numbers are OK now.

“People know their risks but they don’t know what to do about it. Some don’t go to the doctor – especially the seniors. They’re afraid of bad news, or they don’t trust their doctor because of things that happened in the past. They will trust these guys here.”

Thomas and Zien came to the program through very different routes. Thomas was in banking and title insurance. Zien, a Sudanese immigrant, got his MD in Moscow and is working toward his license here

r charge is to educate their constituency through testing: blood pressure, body mass index, glucose, cholesterol. Results from a needle stick to the finger, a bathroom scale a blood pressure cuff go into a laptop, where patients’ charts are kept. But Thomas and Zien don’t stop there. If there’s a medical need, they’ll address it. Dental problems, bus fare to the doctor, help the health care system - chances are, they’ve got the contact to help.

“What I try not to do is nothing,” Thomas said. “I try to give them something.”

In addition to Thomas and Zien, 14 community health workers serve in all Colorado counties. The program’s mission is shifting from collecting baseline statistics of clients’ health to include more follow-up care to show the program’s impact, Solutions manager Pedro Arevalo Rincon said.

“For example, we want to show the state that this man’s cholesterol was 308, and now it’s at 200 or 180,” Rincon said. Proving the program’s effectiveness to the state is important in order to increase funding opportunities. Much of the budget comes from tobacco settlement dollars, but, as with all state-funded programs, Solutions’ funding is diminishing with the state budget crisis.

Davis says there’s no doubt the program is working.

“A lot of them know about blood pressure, but they don’t know they have some control over it,” he said. “They’ll say, ‘My mother and grandmother had it. If I get it, I can’t help it.’

“We teach them about physical activity and nutrition. We tell them they can control it.”

Around the corner from Winning Coiffures at Gentleman’s Quarters, shop owner Christopher Alfred is proof positive of the program’s effectiveness.

“My cholesterol was high,” he says, eyebrows as if he’s still surprised by the news. “I thought I was healthy. I ate good, or I thought I ate . I worked out.

“Now I’m eating better. Now I tell clients ‘You can’t go with what you think you know. You can’t go by how you feel. It’s better to know.’”