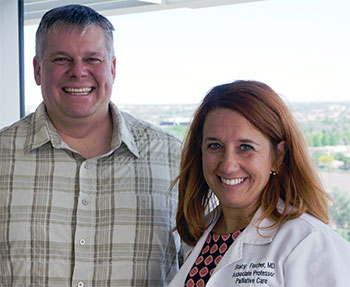 (November 2016) In 2012, family physician Ken Murray, MD, published a moving essay describing a physician friend’s decision to forgo chemotherapy for his cancer and enroll immediately into hospice care. Murray said his friend’s story showed that doctors generally choose such paths in the face of their own mortality.

As physicians, we found his essay powerful and compelling. As researchers, however, we realized this was a testable hypothesis and we started thinking about how to answer the question: Do doctors die differently than non-doctors?

In the months that followed Murray’s essay, the narrative that doctors “die differently” seemed to solidify as reputable news outlets including National Public Radio, Radiolab, and The New York Times proclaimed it as truth. Such reports fueled our passion to find a way to determine if it was actually true.

The most difficult part of our study was finding a large dataset linking occupation to health care utilization. We spent nearly two years exploring potential datasets from Kaiser, Group Health, and the Health and Retirement Study. All included occupation, but each one had too few physicians to perform the type of analysis we needed.

The American Medical Association (AMA) keeps a dataset of physicians’ addresses for marketing purposes. We learned that the group also keeps a dataset of deceased physicians, so we bought it and worked with the vendors of Medicare data to create a de-identified dataset connecting physicians with their health care use.

We were interested in utilization outcomes related to quality of death. Specifically, we looked at hospital, ICU, and hospice admissions and lengths of stay.

We did find small differences in hospice care. Our data showed that 46.4 percent of physicians compared to 43.2 percent of non-physicians had enrolled in hospice care for the last six months of life. Doctors used hospice an average of 2.4 days longer than others.

These results surprised us. We were left wondering why our findings conflicted with the prior evidence demonstrating that physicians prefer less-aggressive care.

First, we considered whether it was generational; many of the physicians in our sample trained and practiced medicine at a time before hospice, palliative care, or the technological revolution of medicine.

Second, fear and avoidance of dying are strong motivators of much of human behavior, and physicians, being human, obviously are not immune to those motivations.

Third, and perhaps most troubling, is that the health care system, and not patients or providers, may be driving much of the low-value care at the end of life.

The recent Institute of Medicine report on “Dying in America” highlights the limitations of the fee-for-service Medicare reimbursement structure that provides incentives for procedures while providing minimal coverage for the high-value supportive services patients and families commonly need. Thus, the system has evolved to favor hospital-based interventions.

While we like to think of ourselves as autonomous masters of our own destiny, our results make us wonder if forces beyond our control drive much of what we see in medical care in the last months of life.

Dan Matlock, MD, MPH, and Stacy Fischer, MD, are associate professors of medicine. Their study, “How U.S. Doctors Die: A Cohort Study of Healthcare Use at the End of Life,” was published in the Journal of American Geriatrics Society in May 2016.