Linking Alzheimer's and Down Syndrome 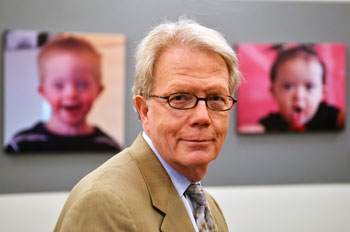 ( 2013) Is Alzheimer’s disease an acquired form of Down syndrome?

That question, so provocative in 1991 when Huntington Potter, , first it that fewer than a dozen research groups around the globe dared explore it, today is sparking renewed interest in the scientific community as evidence grows stronger that the two conditions are inextricably linked.

As the new director of Alzheimer’s disease programs on the Anschutz Medical Campus, Potter intends to lead the charge.

“There is no other place that looks at Alzheimer’s disease through the lens of Down syndrome in as specific and dedicated as we are going to do here,” says Potter, seated in his office at the Linda Crnic Center for Down Syndrome. “They are two sides of the same coin. By studying them together we can get better insights into both.”

Born in Beirut, Lebanon, to expat parents teaching there, Potter grew up in Washington, D.C., before heading to Harvard in 1968. He stayed for 30 years, earning a in biochemistry and molecular biology before 13 years on the faculty.

He then headed to Tampa to spearhead the region’s first National Institute on Aging (NIA) Alzheimer’s Disease Research Center from the ground up.

In July 2012, he came to CU to help establish the new Memory and Dementia Clinic. Within three years, he hopes to put the Anschutz Medical Campus on the map as home of the first NIA-designated Alzheimer’s Center between St. Louis and San Francisco.

“Colorado has needed a center like this for decades,” he says, noting that Colorado and adjacent states host roughly 200,000 people with Alzheimer’s disease and have the fastest rate of increase in the nation. And this center, he says, will have a research focus “unique in the world.”

Since the 1970s researchers have known that every person with Down if they live long enough, develops the amyloid plaque and neuron-killing tangles in the brain that are the hallmark of Alzheimer’s disease. 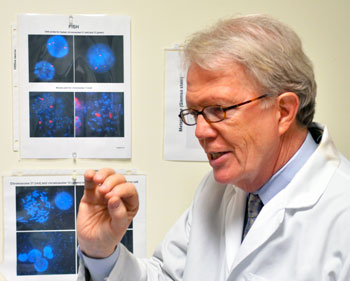 In 1991, as a young associate professor at Harvard, Potter changed the focus and asked: Do people with Alzheimer’s develop cells in their bodies that have three copies of chromosome 21, the hallmark of Down syndrome?

“We started looking, and we found them,” he recalls. In 1999, a student in his lab published a seminal paper, showing that in people with typical age-related Alzheimer’s disease, 6 percent to 8 percent of skin cells contained three copies of chromosome 21. Subsequent studies have found similar results in brain cells.

“What we hypothesized and proved was that people with Alzheimer’s disease, for some reason at some point, begin to make mistakes and generate cells with three copies of chromosome 21,” he says. In a nutshell: “Alzheimer’s disease is a form of Down syndrome.”

Since then, Potter and other researchers in the Alzheimer’s and Down syndrome communities have delved in with more questions: Why would a person without the syndrome begin to generate Down syndrome-like cells? And how might an extra copy of chromosome 21 boost Alzheimer’s risk

While more research needs to be done, some intriguing answers have emerged

As it turns out, the gene that codes for the precursor to amyloid-beta peptide — the protein that accumulates in the brain in a gummy plaque, strangling neurons in Alzheimer’s patients — resides on chromosome 21. With three copies of chromosome 21, and thus, an extra dose of that gene in every cell of their body, people with Down syndrome start making more amyloid earlier

“We know that amyloid accumulates very early in the brains of infants with Down syndrome. It has even been described in the fetal brain,” says Ira Lott, MD, who directs the Down syndrome program at University of California, Irvine. He has been exploring the link between dementia and Down syndrome for 30 years. “By age 40, their brains begin to look like the brains of Alzheimer’s disease patients in the general population.”

Animal studies also have shown that the presence of amyloid-beta, or , can coax normal cells, when dividing to generate daughter cells, to make more mistakes in chromosome segregation.

“You have a vicious cycle where, if you make more A beta peptide you end up getting more cells with the wrong number of chromosomes,” explains Potter. “We need to know how those cells make those mistakes and drugs to prevent it.”

But there are other reasons to study the two diseases in concert.

Lott notes that even though 100 percent of people with Down syndrome develop Alzheimer’s-like plaques and tangles in their brains, only about 50 percent ultimately develop true signs of dementia. Why?

“It is one of the big unsolved mysteries. The answer would be of benefit to us all,” says Lott, who credits the Linda Crnic Center for being “instrumental” in forging collaboration between the two fields.

Potter hopes to learn more by conducting longitudinal trials of people with Down syndrome to explore whether differences in diet, lifestyle or environment contribute to this distinction. He also hopes to use blood tests and brain scans of volunteers with Down syndrome over time to get a better picture of the early hallmarks of Alzheimer’s disease pathology and how it progresses.

“We can study the course of the disease in a human population that is guaranteed to get it,” he says.

By joining forces with Alzheimer’s disease researchers with far deeper pockets, those studying Down syndrome will also have more resources to help improve the lives of their patients.

“It is unfair, but the reality is that there is a lot more money to study Alzheimer’s disease than to study Down syndrome,” says Potter.

Already, the Linda Crnic Center has teamed up with the Alzheimer’s Association to call for research proposals from scientists wanting to study the Alzheimer’s-Down syndrome link. The two will share the cost to fund them. And the new Memory and Dementia Clinic, headed by Jonathan Woodcock, MD, has begun seeing patients and reaching out to physicians of Down syndrome patients to let them know of the center’s unique expertise.

The ultimate goal: to prevent or stop the progression of memory loss in anyone with dementia.

“People are beginning to realize that this is important,” Potter says. “I expect there will be more and more researchers looking at Alzheimer’s disease and Down syndrome together.”