Secrets of a Storage Facility 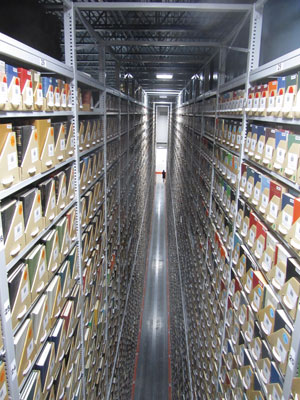 A History of Human Stupidity

Inside a non-descript blond building toward the eastern edge of the Anschutz Medical Campus you can find what sounds like heaven on any hot, dry Colorado day: a perfectly controlled climate at 55 degrees and 35 percent humidity with two darkened 30-foot-high bays and 1.7 million books, maps, film, journals, videos, phonograph records and other materials.

Birds of the World

When University of Colorado leaders decided to move the health sciences programs to the former Fitzsimons Army Medical Base in Aurora, the wide open spaces of the new campus seemed like a good place to build an enormous archival repository. The Preservation and Access Service Center for Colorado Academic Libraries (PASCAL) started going up in 2000 with the expectation that five bays would eventually be built.

“At that time there was nothing out here,” PASCAL manager Michael Kelty says. The campus since has grown up around the building, which currently has two bays.

Dating from the 1800s, materials from two academic libraries—Norlin Library of CU Boulder, Auraria Library and the Health Sciences Library —line the shelves two deep. The staff at PASCAL receives about 100 daily requests for scans or loans; meanwhile, Kelty says many more materials arrive every day. Most years the library averages 300 new items daily, but last year, the number was 1,000 because the Library at CU Boulder closed.

The initial idea for the facility was to house older materials that are important but low in demand. But times have changed, Kelty says.

“The trend is toward de-accession,” he says. “No one wants to keep these materials anymore. It’s too costly. And when people remodel they don’t have time to weed. Plus it’s expensive to weed. They just ship everything here.”

The collection is varied. Alongside historical books like Crime and Custom in Savage Society and documents such as Ken Salazar’s archives from his years as a U.S. senator, you can find copies of books by popular authors like Danielle Steel, William Shatner Jackie Collins. The purpose collecting books by easy-to-find authors?

“Norlin is collecting books by Jewish authors,” as part of an archival project with the Program in Jewish Studies, Kelty says.

Diary of an Adulterous Woman

Do Kelty and his staff ever stop and read some of the more interesting books? The question makes Kelty smile.

“People ask me if I have a Kindle. What do I need that for?” he asks, sweeping his arms toward the stacks. “I have all this.”