What Is Esophageal Cancer?

Esophagus cancer, more commonly known as esophageal cancer, starts when cells within the lining of the esophagus mutate or change and begin to multiply.

The esophagus, a long muscular tube that connects the throat to the stomach, helps move food from the mouth to the stomach to be digested. The esophagus is usually between 10 and 13 inches long and about ¾ of an inch wide in adults. Esophageal cancer can develop anywhere along the esophagus.

Esophageal cancer begins in the cells of the tissue lining the esophageal wall and grows outward through layers called the mucosa, submucosa, muscularis propria, and adventitia.

More common among men than women, according to the National Cancer Institute, esophageal cancer accounts for 1% of all cancers diagnosed in the United States, with more than 18,000 new cases each year. It is estimated that more than 16,000 people will die of esophageal cancer each year, with a five-year relative overall survival rate of 19.9%. This means about 20 out of every 100 people with esophageal cancer will be alive five years after diagnosis.

According to the American Cancer Society, in Colorado, there are an estimated 290 new cases and 250 deaths from esophageal cancer each year.

Over the last decade, rates of esophageal cancer in the Unites States have been decreasing slightly.

Why Come to CU Cancer Center for Esophageal Cancer

There are dozens of esophageal cancer clinical trials currently being offered by CU Cancer Center members, giving patients many different treatment options. Specialists at our Esophageal and Gastric Cancer Multidisciplinary Clinic perform more esophageal and stomach cancer operations than any other hospital in Colorado. Treatment of esophageal cancers at specialized and experienced high-volume centers such as the University of Colorado Cancer Center is associated with improved outcomes and survival.

The Esophageal and Gastric Cancer Multidisciplinary Clinic brings together a team of expert surgeons, gastroenterologists, pathologists, oncologists, radiologists, and more focused on the esophagus and stomach. Together, the team analyzes a patient’s diagnosis and recommends a specific treatment plan for the individual by the end of the visit. The Esophageal and Gastric Cancer Multidisciplinary Clinic has a designated point of contact, Megan Marsh, PA-C, for prospective patients, current patients, and referring physicians.

For esophageal and gastric cancers, our team of abdominal and thoracic cancer surgeons specialize in treating these tumors using traditional and laparoscopic techniques. Whenever possible, our doctors look for ways to treat esophageal and gastric conditions using the least invasive techniques that can accomplish the goal. Using minimally invasive techniques offers the potential benefits of a faster recovery, less incisional pain, and fewer wound infections and pulmonary complications.

Our clinical partnership with UCHealth has produced survival rates higher than the state average for all stages of esophageal cancer. 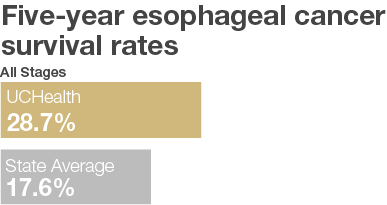 There are two different types of esophageal cancer, based on the cell type from which the cancer starts.

Squamous cell carcinoma is cancer that starts in the flat, thin squamous cells that line the inner layer of the esophagus, the mucosa. This type of esophageal cancer is the most common worldwide and can form anywhere along the esophagus but is most commonly found in the cervical esophagus.

Esophageal cancer is caused by DNA changes or mutations that occur within healthy cells. Normal cells in the body go through a life cycle where they grow and divide to form new cells and then die when the body no longer needs them. Cells contain DNA that tells the cell what to do. When a cell’s DNA is damaged, cells continue to grow and divide where they aren’t needed by the body. This buildup of cells becomes a tumor.

Researchers have found several factors that might increase the chance of developing esophageal cancer. These risk factors include:

Age: Esophageal cancer can be diagnosed at any age, but fewer than 15% of cases are found in people younger than age 55.

Gender: Men are three times more likely to get esophageal cancer than women.

Weight: People who are overweight or obese have a higher chance of developing adenocarcinoma of the esophagus.

Tobacco: The use of cigarettes, cigars, pipes, chewing tobacco, and other tobacco products increase the risk of developing esophageal cancer.

Barrett’s esophagus: Over time, gastroesophageal reflux disease can damage the inner lining of the esophagus. Barrett’s esophagus occurs when the squamous cells that line the lower portion of the esophagus are replaced with gland cells that are similar to cells found in the lining of the stomach that are more resistant to stomach acid. Over time, these gland cells can mutate, resulting in dysplasia, a pre-cancerous condition.

Trouble swallowing: Dysphagia, or trouble swallowing, is the most common symptom of esophageal cancer. It is the same feeling as having something stuck in the throat. The discomfort normally starts as mild and gets worse over time as the cancer gets larger.

Chest pain: Some pain or discomfort from heartburn in the center of the chest can often be a symptom of esophageal cancer.

Weight loss: Many people who develop esophageal cancer notice unplanned weight loss. A decrease in appetite caused by painful swallowing is most commonly the cause.

Chronic cough or Hoarseness: Developing a hoarse or scratchy voice, or a cough that does not go away.

Vomiting: This can also include coughing up blood.

Bleeding into the esophagus: This blood then passes through the digestive tract, which may turn the stool black. Over time blood loss can lead to anemia which can make a person feel tired.

In patients with signs and symptoms of esophageal cancer, exams, tests, and a biopsy will be conducted to confirm the diagnosis.

Barium swallow test: For this test, the patient is asked to swallow a thick, chalky liquid called barium to coat the esophagus, and then X-rays are taken. The barium helps show any abnormal tissue or areas on the lining of the esophagus on the X-rays.

Endoscopy: During this exam, a long flexible tube with a camera on the end (endoscope) is inserted down the throat into the esophagus. This test lets doctors clearly see any abnormal or irritated areas of the esophagus.

Biopsy: During an endoscopy, doctors can pass special instruments through the endoscope to remove tissue samples of suspicious areas.

After diagnosis, doctors may recommend further tests to determine the cancer stage. These additional exams include:

Bronchoscopy: An exam that can be done to see if the cancer has spread from the upper portion of the esophagus to the trachea or bronchi.

Endoscopic ultrasound: A test that is usually done in combination with an upper endoscopy. The endoscopic ultrasound emits sound waves at the end of the scope that allows the probe to examine tumors closely and help determine their size. This test can also show if the esophageal cancer has spread to the lymph nodes.

Computed tomography scan (CT): A CT scan uses x-rays to take cross-sectional images of the body that are able to show if the esophageal cancer has spread to nearby organs or lymph nodes. Patients are asked to drink oral contrast before having a CT scan to more clearly show irritated or abnormal spots in the esophagus.

PET/CT Scan: This scan combines a CT scan with a metabolic nuclear medicine scan to detect if the cancer has spread to other organs.

Thoracoscopy and laparoscopy: These two procedures are done in an operating room under general anesthesia to let the doctor see the lymph nodes and other organs inside the chest and abdomen. A scope is inserted through a small incision in the abdomen to view the space around the esophagus.

The most commonly used staging system for esophageal cancer is the American Joint Committee on Cancer. The TNM system assesses the size and extent of the tumor (T-tumor), how far it has grown into the wall of the esophagus; whether the cancer has spread to nearby lymph nodes (N-node); and the presence and extent of metastasis (M-metastasis) to distant lymph nodes and organs like the liver or lungs.

As part of the staging, esophageal cancers are classified by grades to help guide treatments and prognosis. Grades are assigned to describe how the cancer tissue looks under a microscope.

GX: the grade is unknown.

Grade 2: the cancer cells fall somewhere between Grade 1 and Grade 3.

Numbers or letters after the TNM assessment provide more details about each of the factors. The lower the stage the better the prognosis and treatment options.

Stage 1: The cancer has grown into the lamina propria or muscularis mucosa but has not spread to any lymph nodes. The cancer can be Grade 1 or undefined and located anywhere in the esophagus.

Stage 2: The cancer has grown into the thick layer of muscle or the outer layer of the esophagus and has not yet spread to lymph nodes or distant organs. The cancer can be any grade and located anywhere in the esophagus.

Stage 3: The cancer has grown into the lamina propria, muscularis mucosa, submucosa, or the muscularis propria, and has spread to no more than 6 lymph nodes nearby. It has not spread to distant organs and the cancer can be any grade located anywhere in the esophagus.

These stages can be further broken down based on the size of the original tumor and the extent to which the cancer has spread.

Treatment for esophageal cancer is tailored to each patient and is dependent on the stage of the cancer, where it is located, and other health concerns. Esophageal cancer care teams may include multiple health care specialists including surgeons, gastroenterologists, pathologists, oncologists, radiologists, and more.

Minimally invasive procedures with an endoscope are most commonly recommended for small esophageal cancers. If the cancer is only in the thin superficial layers of the esophagus and has not spread into deeper layers, a surgeon may recommend removing the cancer and healthy tissue surrounding it with an endoscope.

Chemotherapy is a treatment that uses drugs that travel through the bloodstream to reach cancer cells in most parts of the body. Chemo is often combined with radiation therapy and can be used at different times during treatment.

Adjuvant chemotherapy is often given alone or with radiation after surgery to kill any cancer cells that may have been left behind.

In advanced cases, chemotherapy may be used to help shrink tumors that have traveled to other organs like the liver but is not likely to cure the cancer.

Radiation is a treatment that uses high-energy rays or particles that destroy cancer cells. Chemotherapy is often used in combination with radiation, known as chemoradiation, to make the treatment more effective against some esophageal cancers.

Immunotherapy is used to treat both localized and advanced esophageal cancer. Immunotherapy uses drugs to train the immune system to enhance the body’s ability to fight cancer.

The University of Colorado (CU) Cancer Center partners with UCHealth, Children’s Hospital Colorado, and Rocky Mountain Regional VA to provide clinical care. Please make an appointment with one of our clinical partners to be seen by a CU Cancer Center doctor.