The Rural Track program at the School of Medicine has landed federal financial backing that will dramatically change its funding picture.

The program, headed by Dr. Mark Deutchman, has been funded for six years by grants from the Colorado Trust, the Kaiser Foundation and the School of Medicine. President Barack Obama’s spending bill from last December included $575,000 to support rural training such as the Rural Track and other programs, including those at the Area Health Education Center that headed by Dr. Jack Westfall.

This federal grant will help expand the program beyond the Rural Track itself and will also help enhance the teaching skills of the rural doctors who host students completing rotations at their sites.

“When you get an infusion of money like this, it’s a big deal,” says. “It acknowledges the importance of the rural medical workforce.”

School of Medicine students have an opportunity to join various tracks, such as the Rural Track, to enhance their undergraduate medical experience; the Rural Track was created in an effort to address both the growing shortage of family physicians and other primary care physicians, and to help students understand that they can practice excellent medicine in a rural environment. 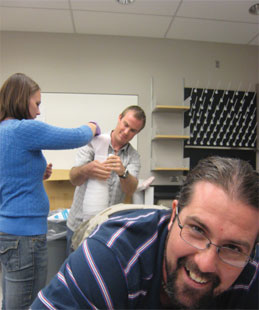 Medical students today face a hefty debt load, which often makes them feel like they have to go into a highly paid specialty in a large city to pay down their debt. According to the American Association of Medical Colleges, the median public medical school tuition has increased 133 percent in the 20 years between 1984 and 2004. In 2009 the average medical student graduated with $156,456 in educational debt.

The University of Colorado School of Medicine’s student debt is among the highest in the nation for public institutions. According to the Denver Post, Colorado's state support is ranked 78th out of the 80 publicly funded medical schools in the country.

works through the program to dispel negative myths about rural medicine, saying, “If you look at the data on what primary-care physicians earn in the city versus in a rural area, they’re often better off in a rural area.”

One reason for this is that the cost of living is usually much lower than in urban areas. Also, rural doctors can earn more because they can have a broader scope of practice. Rural doctors today are less isolated than they were in the past, which also makes rural medicine more attractive than ever before. 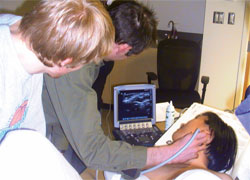 Many join group practices, host sub-specialists on a regular basis and use technology to keep in touch with colleagues and to stay current on changes in their field.

Deutchman explains that rural doctors have a huge impact on their communities and often their professional life is much richer, allowing for a deeper relationship with patients. The Rural Track attracts a unique cohort of students, many from rural areas themselves.

While all students do a rural clerkship during their third year, Rural Track students have the opportunity to start early, doing a rural rotation between their first and second years of medical school. Students also meet for seminars regularly to bring a rural focus on what they’re learning in the classroom. Interest in the Rural Track is growing.

In 2006 there were 62 applicants to the program. For the entering class of 2010, there were 190 applicants. Some of the 12 to 20 students who are accepted into the program each year will eventually go into rural medicine, and some will not.

says that those who don’t will “have a better appreciation for rural medicine. If they become consultants, they’ll be better consultants to patients and physicians from rural areas.”