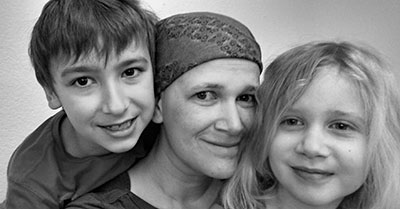 (May 2016)  Rebecca Marsh knows how to balance risk and benefit.

A physicist by training, Marsh spends a portion of her time at of Colorado Hospital’s Breast Center clinics making sure the imaging equipment is working properly and delivering the appropriate radiation dose. She also speaks with women, in person and on the phone, who are concerned that the radiation they receive from mammograms, CT scans other imaging tests will endanger their health and even possibly cause cancer.

Marsh, an assistant professor of radiology at the University of Colorado School of Medicine, does her best to counter their fears with facts. Despite splashy news media reports, there is no evidence that radiation from imaging equipment causes cancer.

“I understand their concerns,” she says. “But there is a lot of false information and I strive to send a consistent message that is accurate, accessible and consistent.” For women considering breast cancer screenings, Marsh adds, “My job is not to convince them to get a mammogram but rather to help them make an informed decision.”

Such risk-reward calculations are the stuff of everyday life. But sometimes the odds break the wrong way. In March of last year, Marsh felt what she describes as “a structure” in her left breast. Although her mother had died at 57 from a rare abdominal cancer, there was no history of breast cancer in her family, and Marsh was only 36 – well below the American Cancer Society’s guidelines for .

She mentioned it during her next regular visit with her primary care physician (PCP) at a UCH clinic. You don’t meet the criteria for a clinical breast cancer exam, her PCP said. But a medical student was observing the visit, so the PCP took the opportunity to demonstrate how to conduct the exam. Everything seems fine, the PCP said, calling the structure the result of normal fibrotic changes.

“That coincided with what I had read online,” Marsh recalls as she sat in her tiny interior office in Research Complex 2 nearly a year later. “I wasn’t worried.”

But someone else was. In November, Marsh’s boyfriend told her he was concerned about the small mass. It doesn’t feel right to me, he said. She played down his worry and laid out her logic: She wasn’t considered high risk for breast cancer, her PCP had told her there was nothing to worry about, she had lots of responsibility in her job with CU’s Department of Radiology, and she felt fine.

Her boyfriend held firm. I think this is different, he said.

“I told him, ‘If it will make you feel better, I’ll get it checked out,’” Marsh says.

Shortly thereafter, she was in the mammography area of the Breast Center in the Anschutz Outpatient Pavilion. She pulled a tech aside, related the background of the suspicious structure and asked for a recommendation. The tech told her the clinic takes walk-in patients, so why not get a mammogram?

Marsh did so, and the image showed a mass that on review looked like a cyst. She then got a follow-up ultrasound. A fellow radiologist came the room and delivered bad news. The mass he saw had different shades. That meant it was probably not a cyst, which would be filled with fluid and therefore would show up as an image with uniform brightness.

It was now early afternoon, and Marsh headed in for a biopsy, which confirmed a 3-centimeter primary tumor. Her boyfriend and the tech who had done the mammogram stood by as Marsh asked the radiologist a blunt question: What’s your feeling about what’s going on? She got a numbing answer. The chances are 99 percent that cancer, the radiologist said. That’s going to mean chemo, surgery radiation.

“In the space of four or five hours, I went from thinking the worst-case scenario was that I had a cyst to ‘you very likely have cancer,’” Marsh says. Twenty-four hours later, the 1 percent chance she’d hoped for vanished. The pathology results showed two primary masses, both positive. Marsh had cancer that most commonly up in women under the age of 40.

The next big question – and ray of hope – was whether had metastasized. She emailed University of Colorado Cancer Center medical oncologist Virginia Borges, MD, for guidance. At Borges’ recommendation, Marsh got nuclear medicine and CT scans the same week and found her silver lining. There were cancer cells in several lymph nodes, but no evidence that the malignancy had spread to other parts of her body. A subsequent test showed no known genetic biomarkers, further decreasing the likelihood of cancer, particularly ovarian.

Marsh began a regimen of eight chemotherapy treatments for Stage 3C breast cancer on Dec. 17, 2015, and completed the fifth Feb. 11. She’ll finish chemo at the end of March, and then have a four-week recovery period before her surgery – a lumpectomy, not a mastectomy, because of the specifics of her genetic testing and the size and location of the tumor. A six-week round of radiation is slated to begin the end of May.

She has a path forward, but her life with cancer follows no straight lines. news is mixed with good, fear with hope. For example, cancer cells tend to be more aggressive in women under 40, but they also are often ideal targets for chemotherapy precisely because the tumors are growing rapidly. Marsh deals with fatigue, illness, and mental lapses caused by the chemo, but that’s been cushioned a bit by 10 weeks of leave she had piled up. With her department’s strong support, she keeps a flexible work schedule.

The lines of life are the most blurred when it comes to her young children – Owen, 8, and Lucia, 5. One thought emerged from the confused swirl the day she confronted cancer: What am I going to tell the kids? She called her three sisters and ex-husband to give them the news, then waited for her children to come home from school. Marsh told them she was sick, waited for their questions, and got the big one in about a minute: Are you going to die?

Her disease isn’t black and white, and neither was her answer. “The goal is no,” Marsh told them. “I said there are plenty of people with the same illness I have and many of them get treatment and live a long time.” Seeing her son’s concern, she talked about what would happen as she went through treatment.

“I told them about the long-term plan,” Marsh says, “and that I was going to get medicine that would kill the cancer cells but that it would make me feel sick and tired and that my hair would fall out.” They went out together to pick out . When her son worried about people making fun of her for losing her hair, Marsh gave him a simple reply: “Tell them, ‘My mom is sick,’” she advised.

When Marsh’s hair began to fall out after she started chemotherapy, her daughter asked, “Why would you take medicine that makes your hair fall out?” Marsh explained that she could either take the medicine that kills the tumor cells and wait for her hair to grow or keep her hair but let the tumor cells spread to the rest of her body. “I think you made the right choice,” her daughter replied.

Rather than hide her periodic lapses in mental focus, she lets them know it’s something that comes with the chemotherapy. On one such her daughter said, “You did that because of the medicine,” a line that has become something of an inside joke.

One step at a time

Marsh also tries to be pragmatic about and the limitations it has imposed on her life. She accepts that there are days the chemo will leave her physically sapped. “My perspective now is that when I’m not feeling well, I just have to wait it out.” She takes advantage of the good days and works as much as she can. She’s now preparing a presentation of her research for a March meeting in Salt Lake City and has made it a goal to make that trip.

“Because of the chemo, I’ve had to pull back on other professional involvements,” she says. “I need this one thing I know I can do.”

Marsh still knows the importance of balancing risk and benefit. But her cancer has also given her a new perspective on the limits of knowledge. She trained at MD Anderson Cancer Center and spent nine years there. She did graduate work in radiation therapy physics. But cancer pays no attention to such qualifications.

“Cancer treatment is not foreign to me,” she says. “But there is a false impression that ‘smart’ people can catch cancer early. I’ve worked in mammography, and part of my profession is working with breast imaging. I have a master’s and a – and I still had stage 3C breast cancer.”

Marsh’s “public service message,” as she puts it, is simple. “If you notice changes and have concerns and suspicions, go in and check it out – even if it hasn’t been a year, or you’re too young, or you’re not in a high-risk category. Women in their 30s and early 40s are really busy, and it’s easy to put a mammogram off. But figure out a way to fit it in.”

And listen to your loved ones, she says. “If my boyfriend hadn’t said anything, I might not have gone in for months,” Marsh says. “That might have made a big difference in how this all played out.”

This article originally appeared in the UCHealth Insider in February 2016.​