A Successful Journey from Clinical Care to Epidemiology 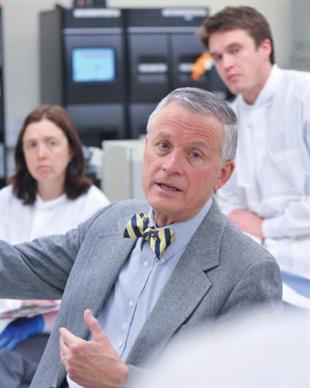 (May 2, 2011) There was a moment in 1985 when James Todd, MD, realized his career providing one-on-one care for children in intensive care at The Children’s Hospital was in jeopardy.

He needed to reinsert a tracheotomy tube in a very sick child. "I couldn’t see well enough to do a procedure to save the child’s life," he says, shaking his head at the memory.

"It’s a terrible feeling knowing a child’s life hangs in the balance. No one else could get it in, so in I put my little finger in there and found where the tube ought to go."

The child lived. But afterward, Todd said to himself, "I shouldn’t do this anymore."

Todd had been diagnosed with keratoconus, in which the cornea becomes distorted. His sight had been failing gradually. He had been reluctant to interrupt his career in infectious diseases and intensive care to get corneal transplants.

"Doctors are often the worst patients," he says.

An enviable clinical career was over. Todd had been the first full-time School of Medicine faculty member at Children’s; he had helped establish the hospital’s Infectious Diseases program, its ICU and its first Research Center and in 1978 he published the first description of Toxic Shock Syndrome, which brought international attention.

"Sometimes change comes as a push, sometimes it comes as a pull," says Todd, a professor of Pediatrics, Microbiology Epidemiology at the University of Colorado School of Medicine and Colorado School of Public Health. "My deteriorating vision was pushing me in another direction, and the hospital and university fully supported me to make that change. "

Unable to treat individual children in the ICU, he turned to advocacy for all children. The change proved to be a windfall for Colorado kids and, Todd feels, for himself. Here’s a sample of the recognitions Todd’s new line of work brought him:

Todd, who now has corneal implants, embraced the shift to epidemiology. He knew ICUs were treating children with preventable infectious diseases. And he knew that if they’d had a primary care doctor, they likely would have been vaccinated against many of the illnesses, heading off expensive treatment.

"Getting health care and vaccines to these kids was a pressing moral and political issue," he says. "We shouldn’t make children the victim of our ideologies." Todd helped push to improve Colorado childhood vaccination rates, which rose from nearly last in the nation in 2002 to 15th now.

He created the annual State of the Health of Colorado’s Children report to analyze children’s health outcomes. He helped write laws in 2007 requiring a medical home for all Colorado children with public insurance, and regular measurement their outcomes.

Now director of Epidemiology and Clinical Microbiology at Children’s, he continues to advocate for improved childhood health care.

"There is still much more to do," he said. "Not all children have insurance and many don’t have consistent primary care. With all this debate about health no one should be comfortable with the fact that our children are caught in the middle."

Other pushes and pulls have resulted in additional career changes along the way, including problems with a hereditary movement disorder that now is improved.

Todd says the key to his varied career has been the flexibility of the hospital and CU: "I have been able to work in institutions that value and are really supportive of creativity."

Each career turn, Todd says, brought him to "other things that I loved doing and I had the encouragement and support to do them."

"We all face challenges and changes," Todd says. "Yogi Berra has a saying, ‘Don’t look back because that’s not where you’re going,’ I always look ahead."