Bringing Elite Tests to the Masses 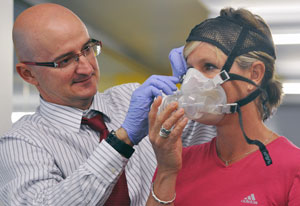 ( 2013) Inside a windowless second-floor laboratory at the Anschutz Health and Wellness Center, professional cyclist Tom Zirbel has begun to break a sweat.

Over his he wears a rigid blue plastic mask, which carries his exhaled breath through a long clear tube to a machine that analyzes it. Across his bare chest is a heart monitor. And by his side is Iñigo San Millán, , who every four minutes cranks up the resistance on Zirbel’s stationary bike and pricks him in the left ear, drawing a tiny sample of blood.

“It is definitely not fun,” Zirbel declares, stating the obvious as his face reddens. But once his hour of suffering is over, he’ll know precisely what kind of shape he is in and have a detailed plan on what he has to do to get stronger. “It’s worth it.”

Zirbel, 34, is among an increasing number of athletes—from professionals to weekend warriors to out-of-shape —turning to San Millán and the University of Colorado School of Medicine’s new Exercise Physiology & Human Performance Laboratory for advice on how to get fit. While cyber coaches charge hundreds of dollars to offer boilerplate plans to runners and cyclists they will never meet, San Millán contends that the key to a successful training program is based on science and catered to the individual, all the way down to his or her mitochondria.

Since taking his post as director of the lab in 2011, San Millán has made it his mission to bring physiological tests once reserved for elite athletes to mere mortals striving for a faster time on the course or a lower number on the scale. He also believes the tests can play a pivotal role in unraveling the origins of metabolic diseases like diabetes and developing prescriptive exercise programs to treat them.

“There are many different kinds of nutritional approaches out there, but when it comes to exercise, people always go for the same high-intensity, 'Biggest Loser' approach,” says San Millán, a professor in CU’s Department of Family Medicine. “They assume everyone has the same engine, but everyone is different.”

As a competitive cyclist growing up in the Basque Country of Spain, San Millán learned his way around a sports medicine lab at an early age. With a population of only 3 million, he says coaches there must get the most out of the few athletes they have to compete on the world stage. To do that, they use science.

“You see kids there having physiological tests at 15 in order to figure out their weak and strong points and how they can prevent injuries and improve performance,” says San Millán, who took his first battery of tests at 16. In his country alone, there were 13 public sports medicine clinics. In ultra-fit Colorado, there are two.

San Millán came to Colorado State University in 1992 to study exercise physiology, rode competitively for a few years, returned home to get a and spent a decade coaching pro-tour cycling teams and Tour de France cyclists from around the globe. When he returned to Colorado in 2008 to take a faculty job at the School of Medicine, he was struck by the lack of science-based coaching among U.S. athletes.

“It is impossible to offer an individualized training plan based on your physiology if you do not do testing,” he says. “I wanted to bring a more scientific approach.”

To do so, he subjects patients to a 30- to 60-minute session on the bike or treadmill, increasing the intensity every five minutes until they reach exhaustion while tracking how their body responds. Like many exercise physiologists, he looks at how efficiently athletes deliver oxygen to their muscles.

But far more important, he says, is what happens inside those muscles. How quickly can the body clear the lactate that binds up muscles and slows the athlete down? How fast do the mitochondria inside those muscles burn through fat and carbohydrates? How does the body react to short, strong bursts of energy like riding up a hill compared to longer, less-intense activities like running a 10k?

With such data, San Millán recommends reasonable goals given effective training. Then he lays out a plan that includes dietary recommendations and target heart-rate zones designed to strengthen specific energy systems.

For Julie Manthey, a 43-year-old Denver mom who wanted to qualify for the Boston Marathon after taking time off from serious running to have a child, San Millán’s lab was one of the first stops before starting a training program.

“You cannot see inside your body so you are basically guessing,” Manthey says. “This gave me a great education about where I was and what level I should be training at.”

She first saw San Millán in January 2009, six years after running her last marathon in 4:14. With his help, and periodic tests to gauge her progress, she ran a 3:47 in 2010, clinching a spot at the Boston Marathon in April 2012. Now she’s working to break 3:30 and continues to work with San Millán.

“These tests offer fantastic information. I encourage anyone who has the means to do them to do them.”

For Zirbel, his first test revealed that his aerobic capacity was not where it should be. He was burning through glucose faster than he was replenishing it and he was taking too long to clear lactate from his muscles.

Among his suggestions, San Millán recommended Zirbel eat more while on the bike and lower his training volume while boosting its intensity. During a follow-up test, Zirbel’s numbers were off the charts.

“A lot of coaches just read books and rely on what they have done in the past,” Zirbel says. “It’s really reassuring to have data behind the advice.”

San Millán explains that elite athletes can load up on carbohydrates, yet stay lean, strong and free of disease because their mitochondria, the powerhouses inside cells, turn fuel into energy and help flush out metabolic byproducts like lactate.

Research shows trained athletes have more and much larger mitochondria compared to people who don’t exercise. Also, studies using muscle biopsies show that people with diabetes tend to have smaller-than-average and far fewer of them.

“We know very well that people with Type 2 diabetes and people who are obese have dysfunction,” he says.

The good news: Research on trained athletes shows that endurance exercise can boost mitochondria within months.

While much attention has been given to putting diabetics on low-carbohydrate diets, San Millán believes that approach may be missing the mark.

“Elite athletes are the only group of people in the world who are 100 percent free of any metabolic diseases, like Type 2 diabetes, yet they are the people with the highest carbohydrate diets,” he says. “Nutritional changes are important, but in my opinion, the root of the problem is sedentarism. I believe Type 2 diabetes should be 100 percent reversible with proper exercise.”

Physiologic tests in San Millán’s lab at the Anschutz Health and Wellness Center range from $100 to $450.