Caring for the Homeless

Urban Underserved Track teaches students while helping those in need

(December 2017) As he headed out of the Denver Rescue Mission chapel, a man in a careworn bomber jacket patted Jamaluddin Moloo, MD, on the shoulder and said quietly, “Thanks, man.”

That gesture of gratitude was for all the CU students and faculty in the Urban Underserved Track (UUT), a CU Anschutz Medical Campus team committed to helping others get and stay on their feet.

For many, standard care and treatment enough, but the first patient of the day needed more help, Moloo said. That patient was a homeless man who had no shoes and had tried wrapping paper towels and plastic bags from 7-Eleven around his feet to protect them from that week’s icy conditions.

“It didn’t work,” Moloo said. The man appeared to have suffered frostbite and was sent to an emergency room for treatment.

“The work of the UUT is important because for much of the clinical time of our students there is little that focuses on the needs of underserved populations such as the homeless, incarcerated, LGBT, etc.,” Kass-Wolff said. “Having this opportunity with the coursework that accompanies the hands-on experiences really opens their eyes to the strengths and weaknesses of our health care system as it is.”

While the program has helped hundreds within these communities in Denver and Aurora, the students say they themselves are the beneficiaries.

“I come from a social-justice-organizing background in Denver, so I’d been working on issues of underserved populations for a decade before I decided to go back to school,” explained Sarah Bardwell, a medical student who received her undergraduate degree from CU Denver. “I very much wanted to focus my medical practice in the city of Denver and on populations that historically don’t have as much medical access or the quality of health care.” 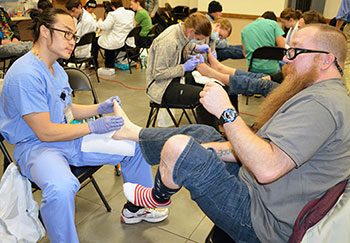 Katie Raskob, a CU medical student who graduated from the University of Notre Dame, said service always has been part of her life.

“After my undergraduate degree, I lived in a Vincentian community. It was the embodiment of service all the time,” Raskob said. “That was when I really decided I wanted to work with underserved populations within medicine.”

Shayer Chowdhury earned his undergraduate degree from Johns Hopkins University, doing a lot of work in the Baltimore community.

“What inspired me to join the track is, you start medical school and it’s a drastic transition, you spend hours studying in your textbooks and going to class and, over time, you might forget what really brought you to medicine,” he said. “Through this track, I really kept the humanistic side to this. It has reminded me every day of why I came here in the first place.”

And that, Moloo said, is what inspired the track begin with.

“We have fantastic students,” he said. “However, during medical school and residency training and nurse practitioner school and [physician assistant training], a lot of students lose that idealism that they entered with, so the main purpose of this track is really to help sustain that idealism.”

The track was founded in 2010 with primary funding from the Colorado Health Foundation, Moloo said. With that funding set to expire, the School of Medicine, the physician assistant program and the College of Nursing have committed to help support the track. Donors are also encouraged to consider supporting through the Office of Advancement at giving.cu.edu/fund/urban-underserved-track-fund.

On this day at the Denver Rescue Mission, several individuals waited on aluminum chairs for their turn to see the students and faculty for treatment. Patients sat in chairs with their feet propped on the lap of caregivers, sharing observations about their toes and their lives’ joys and woes and how the two are intertwined. Just as important as the foot care: the kindness and understanding of the volunteers.

One woman, Carolina, initially was reluctant about coming to the clinic. “Oh no, I’m no lab rat,” she said.

But, sitting back with one bare foot propped each on the lap of the caregivers, she said changed her mind. “God bless you for life. It’s what I tell everyone. God bless you for life,” she told Moloo, Aimee Techau, a psychiatric mental health nurse practitioner student, and student volunteer Dianna Puckett.

Another client, Seth, warned medical student Billy Tran that he’s ticklish, promising he’d try to relax so he wouldn’t kick out at him as the student provided foot care. “I’m nearly 40,” he said, shaking his head. “And I’m still ticklish.”

Another man had recently developed sepsis from an infection in his right foot. His only pair of boots didn’t let his feet breathe, he explained, showing the boots to the two student volunteers, each one working on a foot.

“I’ve been through a lot of bad things in life, but this was the first time I’ve had anything like that,” he said.  The students assured him the infection is healing well and his foot is on the mend.

The emphasis throughout these clinics, Moloo explained, is on the person.

Moloo was born in Bangladesh, later emigrating to Pakistan, Canada and finally to the U.S. He completed his internal medicine training at CU before heading out of state to complete a master’s in public health with a focus on health disparities. He returned to CU in 2008 and along with being track director, he oversees the refugee health elective for clinical students and works in cardiac imaging.

“We definitely stress the importance of primary care, however our primary criterion for entry into the Urban Underserved Track is a commitment toward serving the underserved,” he said. “Anyone who has worked in any safety-net clinic knows the hardest problem we have isn’t necessarily primary care, it’s getting poorly insured or uninsured patients in to see subspecialists. So regardless of whether you go into orthopedics or dermatology or ophthalmology, all we ask is that when you’re out in practice you leave the door open for those who may be underinsured.”

Getting people to where they need to be for assistance is a common issue.

“If you’re uninsured and you have a chronic medical condition that needs treatment, you really don’t have many options for where to go,” said Arian Khorshid, a medical student interested in women’s care. “When the DAWN clinic opened at first, there was on whether it would be utilized to the extent that we were envisioning, and right now we barely have enough time to see all the patients that come in.”

The DAWN Clinic (Dedicated to Aurora’s Wellness and Needs), a partnership between the CU Anschutz Medical Campus and the nonprofit Fields Foundation, opened in 2015. It is a student-staffed, free clinic that offers primary care to uninsured adults in Aurora each Tuesday, and specialty care on other days.

“My primary exposure to the community in Aurora is volunteering at the DAWN clinic,” said medical student Paul Eigenberger. “So far, the needs that I’ve seen come up there revolve around people not being able to get health insurance and relying on free services, which has a lot of pitfalls. For instance, being able to afford . You can be diagnosed at a free clinic, but if you can’t afford the treatment that that diagnosis warrants, then what good is the diagnosis?”

Medical student Matt Cataldo added: “I had a patient who really needed to get a certain vaccine and they got a prescription to Walgreens to get their vaccine, but they couldn’t because they had a $9 copay. They couldn’t afford the $9 copay.”

Cataldo said he spends most of his time on the Denver Health campus and with the Mental Health Center of Denver.

“A lot of the issues I see are health education. I talk to a lot of people with serious complications of preventable diseases like diabetes, and they don’t understand why they’re having eye problems or foot problems,” Cataldo said.

Often, the students said, can’t take a day off of work to go to the clinic.

“We see some of these patients who come a very long way to get to the clinic to receive health care and expect them to do that on a regular basis. When they’re working several jobs, when they have families to take care of, it is difficult,” said.

Both students and former students have maintained their investment in the track.

“About a year ago we started a process to look at our curriculum and we essentially brought in the students to help guide the process,” Moloo said. “And so we’ve had a curriculum redevelopment that has been heavily driven by the students themselves. So they, in fact, thought it would be nice to do it as blocks, and that’s how we reconfigured it.”

The students cite the investment their mentors have made in the students and the program.

“We have faculty for the track,” Chowdhury said. “Dr. Moloo is very experienced in a variety of fields and it’s always amazing to just talk to him because of his wisdom and his experience and his commitment to underserved populations.”