aims to boost of mothers and newborns

(May 2018) After the birth center at Trifinio Center for Human Development opened in rural Guatemala in December 2016, Gretchen Heinrichs, MD the clinic staff realized that effort to lower the death rates for women and newborns needed to extend into the homes of poor farmworkers and their families.

Situated in southwest Guatemala along the border with Mexico, the clinic provides health services in one of the country’s most impoverished regions, where the neonatal mortality rate is among the highest in Central America at 31 per 1,000 live births, and the maternal death rates is one of the highest at 80 per 100,000 live births.

Half of the women in the area lack prenatal care and one-third give birth at home assisted by traditional birth attendants, who have little formal training.

Most local women are in good health, said Heinrichs, CU associate professor of Obstetrics and Gynecology and director of maternal health programs at the Colorado School of Public Health Center for Global Health, so “we realized that the best way to make a difference was to create a safety net around a birth at home.”

CU physicians, nurses midwives have helped train birth clinic and birth center health professionals who in turn act as preceptors to CU students from medicine, dentistry, pharmacy, nursing and public health schools and colleges. The center is a partnership of the University of Colorado, Children’s Hospital Colorado and the Jose Fernando Bolaños Foundation.

The effort to improve the health of Guatemalan women and their babies faces significant obstacles: 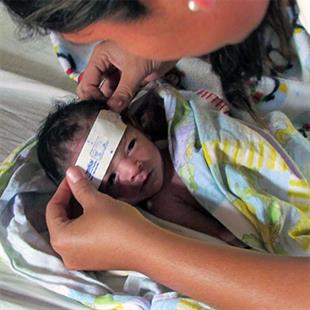 To better understand the health of the community, CU physicians and public health practitioners have been working with residents to learn about social, economic, health, cultural, geographic and genetic factors. Heinrichs and her colleagues at the Center for Global Health joined with the community to create Creciendo Sanos: Madres Sanas y Ninos Sanos, a registry for pregnant women and their young children living in the community with a population of about 25,000.

Expecting many women to continue home births, CU faculty and center staff offer training and friendship to traditional birth attendants in hopes that these women will become the first line of defense when facing problem deliveries.

Traditional birth attendants fulfill a role similar to doulas in the United States, but have less education and limited knowledge of hygiene and sanitation, though they recognize that complicated births can be disastrous for newborns and mothers.

“Attendants are women of respect in the community, and we really need to draw them in and not try to exclude them. We want to be partnered with them and learn what their practice is like,” Heinrichs said.

CU staff classes twice a year for about 20 traditional birth attendants to teach basic emergency obstetrics skills for the most common killers of women, such as hemorrhage, long labor and hypertension and of infants including shoulder dystocia, sepsis respiratory infection.

Center nurses supply attendants with birth supplies and train them to recognize complications before labor begins so attendants can encourage patients to get medical attention. Unlike hospitals in the region, the center welcomes traditional birth attendants and the mother’s family to support the patient.

“Traditional birth attendants are key players who we want to enlist and act as informants in the community to ensure women have safe pregnancies and births,” said Amy Nacht, DNP, CNM, MPH, assistant professor and director of the University Nurse Midwives Faculty Practice at the College of Nursing.

Some of the training has helped, Heinrichs said.

“A few have told us, ‘I used the shoulder (dystocia) maneuver and it worked! It felt so great!’” Heinrichs said. “But our biggest success is getting these women to bring in their patients. We do have a trusting relationship and we’ve had a couple of big successes. And the families know the birth center is clean and they will get a high level of care. They don’t have to drive to the city and wait in long lines.”

But training traditional birth attendants has its limits.

“We found that some things are very difficult for them to learn,” Heinrichs said. “That’s why we began focusing our efforts pretty quickly on skilled birth attendants.” 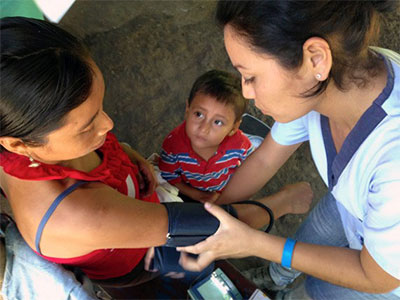 CU faculty developed site-specific curriculum to increase the knowledge, skills attitudes of the nurses who work in the maternal health programs, Nacht said.

“WHO recommends eight prenatal visits (for each pregnancy),” said Heinrichs, who travels to the center twice a year. “We’re having trouble getting to four. Sixty percent have had three prenatal visits and our goal has always been to get to four visits with 75 percent. It’s hard to get out to rural communities and there are a lot of transportation issues.”

CU faculty, students and residents rotate through the clinic, but Nacht says the goal is to support the local health care staff to become clinical leaders and sustain the programs.

“We want the clinical staff to move forward with as much independence as possible,” Nacht said. “This is truly an interdisciplinary project, and I think it’s possible as long as all the teams stay involved with ongoing educational support.”

Nurses have stepped up to take the lead in labor and delivery at the birth center because funds for 24/7 physician coverage are unavailable.

“There are physicians (at the Center for Human Development) but most have almost no training in birth,” Heinrichs said. “Our nurses started to have more modern training in obstetrics than their physician supervisors and that has created an interesting dynamic. In Guatemalan culture, medicine is very paternalistic.

“Our job as trainers and partners is to promote their growth and self-sufficiency. We have seen such growth in our staff there. It has been an inspiring project to work with.”