The Steady Beat of the Arrhythmias- Spring Concert: May 14 at Noon 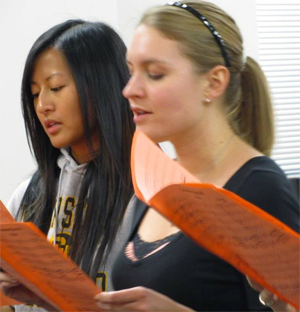 (May 2, 2011) About 10 minutes into the first practice of 2011, a new soprano holding the score to Mozart’s "Coronation Mass" turns to Christina Bishop and asks: "Is this the point in time to admit that I can’t read music?"

Bishop, choir director of the Anschutz Medical Campus choral group the Arrhythmias, responds with the reassuring smile and equanimity of a four-semester veteran deeply familiar with the challenges of turning a group of overloaded health sciences students into a working choir.

Compared to some issues she’s faced, lack of formal musical experience barely registers as a problem. For example, during her first semester leading the choir, weekly practices started two months late, and only two singers regularly attended leading up to the Christmas concert. "I was doubtful we could even get a core," she says.

The next year, she was suddenly short of tenors. "So Christina had a couple of altos switch over," says her husband, Nick Bishop, a third-year MD/ student and outgoing Arrhythmias president.

Nursing and pharmacy students are often scheduled for clinical rotations at the last minute and suddenly can’t participate. "One girl who was practicing with us last fall and who was helping us with publicity for the Christmas concert—she did so much work—was scheduled for two weeks before the concert and couldn’t sing," says Nick Bishop, a natural tenor who’s been called upon in a pinch to sing bass. 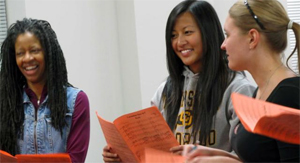 As challenging as all , the Arrhythmias have been a successful venture since 2005. Initially founded as a musical outlet just for medical students, the choir now accepts students, staff faculty from all health sciences fields on campus and performs twice a semester.

The Bishops got involved in 2009 after Nick Bishop learned about the Arrhythmias while touring as a prospective student. But when he arrived for semester, no one seemed to know about them. It wasn’t until October that he was able to find a member of the group—which had not begun practicing for Christmas. Nick Bishop helped restart the Arrhythmias and was able to offer something that the choir had never had before: a professional director, who also happened to be his wife

a Bishop, who has a degree in K–12 musical education and a master’s of music in choral conducting from Brigham Young University, has provided the consistency, stability vision that the group previously lacked. 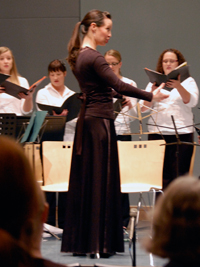 "I can’t tell you enough how glad I am that you are here," alto Jenn Symonds said to Christina Bishop one night after practice. Symonds, a fourth-year candidate in the Reyland Lab, Department of Pathology, remembers that before Christina Bishop’s arrival directors were selected from within the choir. Usually, was negligible.

"I’d like to perform a benefit concert for a hospital featuring a multi-movement work. And maybe someday we could have scholarships for members," she says. "I do like a challenge."