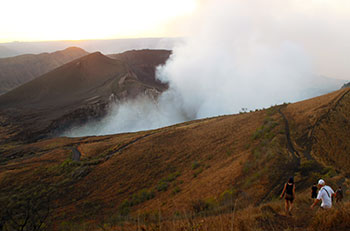 (May 2014) Thanks to improved access and technology, the most far-flung places on Earth are open to travelers with enough money and determination for adventure travel. But returning from those icy mountaintops, deep waters and dense jungles, intrepid, but unprepared, tourists can bring back ailments that are as difficult to diagnose as they can be to treat.

The CU Travel, Expedition and Altitude Medicine (TEAM) clinic, which opened in January, is designed to provide care and expertise for travelers before, during and after travel.

“The vast majority of travel clinics around the country deal almost exclusively with preparation against infectious disease, mainly vaccination and some prophylactic antibiotics,” says Richard Zane, MD, chair of the Department of Emergency Medicine. “But preparation should also look at the environment: Are you going to a place with extreme temperatures or altitude? Will you be in a place that has a lack of access to health care? If so, how do you plan on getting health care if you need it? There’s a second and third level of planning that rarely addressed.”

“It’s not like 100 years ago when people would usually stay in the same environment all their lives,” Zane says. “In less than a day you can go from sea level to Everest or from Denver to a cruise in the middle of the Mediterranean.”

consultation can make a difference between life or death.

“People already know that if they’re going to a place where there is malaria they should prepare for malaria, but this goes a step further,” Zane says. “If you are already on certain medications and you’re going to a place with extreme heat, how will that disease be affected by the potential physiologic stressors of travel, chronic disease a very different environment – heat, cold, altitude, humidity, etc.?”

Primary care physicians don’t always know to ask for a travel history when a patient presents symptoms, plus they often don’t have the most up-to-date information about planning for a trip.

“For the most part, you can’t just go to an internist and say ‘I’m going to Africa,’” Jay Lemery, MD, associate professor of emergency medicine, says.

“They’re not prepared for that. So there’s a real role for us to play.”

The clinic housed at University of Colorado Hospital Outpatient Pavilion incorporated an altitude clinic that has for years been the go-to place for advice on preventing and treating hypoxia. The altitude clinic has a hyperbaric chamber—the only one in civilian use—where experts can measure a patient’s response to altitude before climbing to a mountaintop. Though in Colorado, there’s another option.

“You’ll get people in who say ‘I have COPD, and I want to go to the Andes,’” Tracy Cushing, MD, assistant professor of emergency medicine, says. “A lot of times I’ll say ‘Why don’t you take a trek around Breckenridge and we’ll see how you do at 12,000 feet?’”