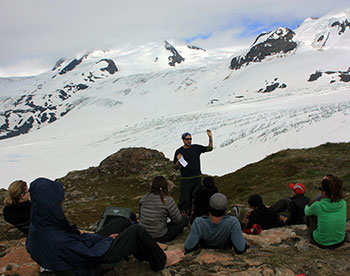 (May 2014) Climate change is a loaded term in medicine just as it is anywhere else these days, Jay Lemery, MD, learned when he issued an appeal for papers on the subject.

“Some guy called me a moron,” he says shaking his head. “It was just a call for papers. That’s about as boring as it gets.”

But if physicians are going to have an impact on the debate, they need to learn to take the heat, says Lemery, head of the Wilderness Medicine Society and a physician in the CU Department of Emergency Medicine.

Doctors can have a big influence on prevention and preparedness by shedding light on the physiological effects of global warming: respiratory illnesses including asthma and allergies, cardiovascular disease, insect-borne illnesses, and injuries and illnesses caused by extreme weather.

“Clinicians,” he says, “are noticeably absent in the conversation.”

It’s in physicians’ interest to weigh in, says Richard Zane, MD, chair of the CU Department of Emergency Medicine.

“We have to think proactively about the population,” Zane says. “It’s similar to whether physicians should have an opinion about gun control or whether marijuana becomes legal. Climate change will most assuredly affect the health of the population. But it’s a quandary. Should you become political? I think the answer is yes. Think about it. There was dispute when we endorsed seat belt laws or drunk-driving legislation.”

Wilderness medicine is a natural starting place for the conversation because its mission is to prevent and treat injury and illness in extreme environments. But you don’t have to travel to find such an environment, Zane points out. It can come to you.

“It includes how to prepare the population when the environment around them is changing,” Zane says.

Increasingly, extreme weather—droughts, hurricanes, floods, polar vortexes — could mean more people will depend on skills developed by wilderness medicine training, such as providing a basic physical exam when technology is not available.

Hoping to introduce the topic to medical schools, he co-edited Global Climate Change and Human Health, a textbook for medical students.

But the public needs to be educated as well. He points to the European heat wave of 2003 that officials estimate caused 30,000 deaths.

He is considering starting a climate change organization modeled on International Physicians for the Prevention of Nuclear War, which advocated disarmament in the 1980s. The group, which won a Nobel Prize in 1985, issued the statement “Nuclear war would be the final epidemic, there would be no cure and no meaningful medical response.”

“They stuck with the science and they were unassailable,” Lemery says. “They said ‘This is a public health issue, and it’s bad.’ That’s what we need to do in wilderness medicine. Stick to the science. Elevate the discourse.”