'This Grant Has Totally Rocked My World'

(November 2016) When Kristin Jensen was a girl, she watched her busy biochemist mother balance her home and work life and wondered why she couldn’t take a break from her job.

“She always told me that she couldn’t do that because she would never be able to get back in,” Jensen says.

Now as a mother of two and a clinical researcher at Children’s Hospital Colorado studying medical care inequalities for patients with Down syndrome, Jensen understands.

“Now I say the same thing,” she says. “If I want to be successful in research, I can’t go less than fulltime.”

But for Jensen and other young clinical researchers who are balancing personal and professional challenges, relief has come in the form of a grant from the Doris Duke Charitable Foundation.

The foundation’s Fund to Retain Clinical Scientists seeks to reverse a national decline in both male and female research clinicians. The Association of American Medical Colleges has reported that 40 percent of physicians with faculty appointments at medical schools leave academics within 10 years. Women and minorities are hit hardest, according to the AAMC.

Declining research dollars are one reason for the drop. But the stress young professionals endure just as their careers are just taking off and many are starting families also takes a toll, says Judith Regensteiner, PhD, professor of medicine, founder and director for the University of Colorado Center for Women’s Health Research, and the Judith and Joseph Wagner Chair in Women’s Health Research.

“Although physicians know they can go into clinical medicine and stop doing research, that is not a good choice for those who love research,” says Regensteiner, who mentors young faculty and is investigator of the grant. “Clinicians can bring a special perspective to research since they are seeing patients.”

“I thought there would be only a few medical schools applying for the grant,” Regensteiner says. “It turns out almost every school in the country applied.”

Ten including CU were awarded funds, and School of Medicine Dean John J. Reilly. Jr., MD, matched CU’s award. The first three grants went out in January; the next group of three in July.

“This grant shows these young researchers that someone cares,” she says. “It shows them that it’s not a heartless world.

“It is an innovative idea to support the personal needs of a scientist, and I hope the idea spreads to other granting agencies.”

Three of the awardees describe the effect the grant has on their career. 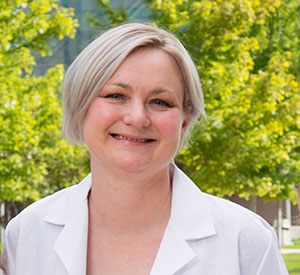 Green started her research career in high school by studying the effect of roller coasters on blood pressure and heart rates at Six Flags Magic Mountain in southern California. The daughter and granddaughter of physicians, Green wondered if roller coasters caused a bump in blood pressure and heart rate or if the bump occurred in anticipation of the ride.

“It turns out that blood pressure and heart rate were much higher if you’d never been on a ride before. But every ride made them go up.”

But mainly what she learned is “‘research is complicated” and she was hooked.

A mother of children ages 10 and 6, Green is an assistant professor in pediatrics and endocrinology. She is the founder and director of the Polycystic Ovarian Syndrome (PCOS) Clinic at Children’s Hospital Colorado and on studies examining insulin resistance in children with diabetes, the effect of exercise in adults in with type 2 diabetes and the effect of gestational diabetes on glucose metabolism in older adolescents. In 2016 she was awarded a Boettcher Foundation grant in the Webb-Waring Biomedical Research Awards program for her work in fatty liver in adolescents with PCOS.

Two years ago, a rheumatoid arthritis flare-up put her career and her family’s stability in jeopardy.

“I’m a very active and involved person and to have to throttle back meant that the first thing I did was cut back on my family life to keep up on all the research,” she says. “It was super hard on my children and now they need additional care.

“This grant allows for better balance. I am backing away from being hands-on for all the research time but not having any falloff in productivity. The grant gives you enough money to hire another research assistant so you can take time away from to deal with personal caregiving.”

She’d already proved her commitment to research through two pregnancies that required bed rest. So she was reluctant to allow the disruptions from two rheumatoid arthritis-related hip reconstructions end her research career and push her entirely into clinical care.

Green has since founded Facebook groups for mothers balancing research and clinical careers and for physician mothers with rheumatoid arthritis. She finds the support fortifying.

“I’ve had all this training and it drives me nuts seeing how many of my MD/ classmates are doing just clinical now. In my class of six, just three of us are still doing research.” 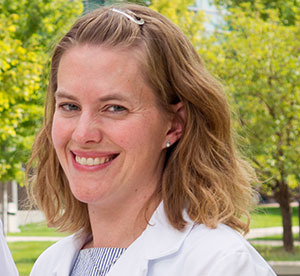 Jensen entered medical school knowing that she wanted to help people with intellectual disabilities as they transition into adulthood and beyond.

She’d witnessed inadequate medical care for disabled adults first hand when she was a young medical student acting as guardian to her uncle who had Down syndrome.

“He developed severe gastroparesis. As the medical team was working him up they kept saying ‘It’s just his Down syndrome. It’s a behavioral thing. He eats too quickly.’ I said ‘Well, I don’t think so. He’s been eating quickly for 60 but has only been throwing up and losing weight for the past several months. Something changed and you need to figure it out.’ They just didn’t know how to treat him.

“Maybe I was naïve but I thought I’d try to dive in and fix the problem.”

Jensen, a mother of two girls ages 5 and 3, is an assistant professor in the Adult and Child Consortium for Health Outcomes Research and Delivery Science with appointments in the Department of Pediatrics and the Division of General Internal Medicine. Prior to her arrival in Colorado, she received advanced training in health services research through the Robert Wood Johnson Foundation Clinical Scholars program. Her research focuses on improving the care of persons with Down syndrome through evaluating health care patterns and implementing strategies to improve of their care. She sees patients in the Special Care Clinic at Children’s Hospital Colorado and in the General Internal Medicine Clinic at the University of Colorado Hospital.

The personal and professional balance she had carefully constructed crumbled after the birth of her second child.

“My youngest was very sick in the first year of life, so I worked hard and got very little sleep,” she says. “It’s hard to be successful as a good mom and a clinical researcher.”

Despite the struggle, Jensen says she was uncertain whether she should apply for the Duke grant.

“Physicians are trained to be self-reliant and not ask for help. I really struggled with whether or not it was appropriate for me to apply. I wondered if there was someone who needed it more.”

She needed little convincing when, for the 10 days prior to submitting her application, both her children were home with high fevers.

“I had been considering reducing my research time to improve my balance, so it’s really been a blessing,” she says. “I feel like a lot of young women have to make that decision. I’ve seen brilliant young women who have training in research and have really great ideas, but they reached enough barriers and gave up on research.” 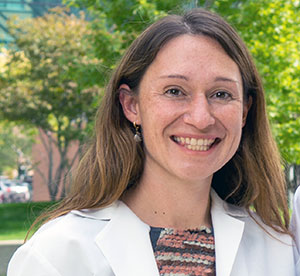 Cervantes spent the first six years of her medical career happily focusing on clinical and educational goals. But when a young patient, a homeless woman with two young sons, died because her immigration status wouldn’t allow for dialysis treatments until she was critically ill, her career suddenly changed focus.

Cervantes began by imploring state lawmakers to make changes to the but quickly realized that research findings would make her arguments more persuasive. And so, two years ago, her research career was born.

Cervantes, an associate professor in the Division of General Internal Medicine, is a hospitalist at Denver Health Medical Center, associate director of Denver Health’s new Center for Population Health and founder and director of both the Healthcare Interest Program and the Health Equity Lecture Series. In 2015, she was awarded the four-year Harold Amos Medical Faculty Development Award from the Robert Wood Johnson Foundation for her research discerning the palliative care needs of Latinos with end-stage renal disease.

“I applied for the award thinking I’d never get it because 99 percent of people accepted have an MPH (master’s of public health) or some kind of research fellowship. But I think I got it because I walked into the room and was passionate about changing palliative care outcomes among Latinos in dialysis.”

She has since interviewed dozens of Latinos suffering from renal disease to understand their palliative care preferences. Next, she plans to develop a program using navigators to improve those patients’ quality of life.

But her research began to suffer when her grandmother fell ill in 2015, and Cervantes and her mother became caregivers. She also is working on her master’s degree in clinical science and has two daughters ages 8 and 6.

“I was waking up at 5 a.m. and working late at night after the girls went to bed while still taking care of my grandmother and mom.”

With the grant money, Cervantes hired a part-time research coordinator, who within two weeks had organized her institutional review board material.

“No way would I have completed this in two weeks,” she says. “It would have taken me six months.”

She also employed a social worker for her pilot intervention to provide mental therapy for Latino patients. Next, Cervantes would like to hire a statistician to support her research analysis and a writing coach because English is not her first language.

“This grant has totally rocked my world.”