A Mother's Call for More Research 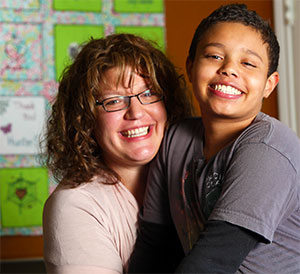 While there are no child neurologists on the School of Medicine faculty recommending that parents use marijuana to treat children with epilepsy, there are families in Colorado who are using the drug.

Even before Zaki Jackson turned 4 months old, his mother noticed that he seemed to be experiencing odd spasms. His pediatrician ordered an EEG.

“I thought he said ‘EKG,’” says Heather Jackson, Zaki’s mother. “I thought there was something wrong with his heart. Then I googled ‘EEG’ and realized, ‘Oh, it’s his brain.’”

“His brain waves were a mess,” Jackson says.

The initial diagnosis was epilepsy of unknown origin and with each passing year, Jackson watched her son experience multiple types of seizures. Sometimes during a seizure, Zaki would lose all muscle function and crash to the floor. Other times, his body stiffened, and he stopped breathing so long his lips turned blue. Other seizures came so frequently — hundreds per day — that Zaki stopped eating for days.

“I was definitely helpless, but I was never hopeless,” Jackson says. “Our job as a parent is to protect our child, but with this, there is nothing you can do. It’s the worst feeling on the planet.”

“It felt like they experimented on my child for nearly a decade,” Jackson says. “There were times I was ready to quit, but the next morning I picked myself up and said, ‘He is worth the fight.’”

In 2012, Zaki was receiving hospice palliative services when his mother heard about a father using cannabidiol (CBD), a non-psychoactive oil made from marijuana plants, to help reduce seizures in his child. She asked her hospice counselor about the oil.

“She said, ‘I can’t recommend it,’ Jackson says. “And then she gave me a phone number to call.”

That phone number led Jackson to the Stanley family, five Colorado brothers who were manufacturing CBD from a special strain of hemp. Jackson gave Zaki his first dose of the oil, administered by syringe, on July 19, 2012.

“I remember that day as if it were yesterday,” she says. “The night before, Zaki had had 200 seizures. That night, I stayed awake and stared at him. He slept through the night for the first time in years.”

Zaki, who turns 11 in May, was the second child in the United States to try the oil, now named “Charlotte’s Web” after the first child to use it