All 'Bout Couples Helps the Harried and Married. 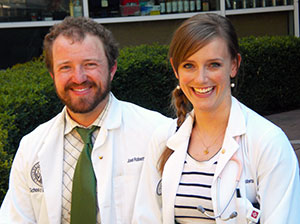 ( 2014) When Sammie and Joel Roberts married in 2010, they agreed their partnership was for better or for worse, for richer or for poorer, in sickness and in health, and, as it turns out, through medical school.

Before they married, they’d both planned careers in medicine, but they knew there was no guarantee they’d get into the same school at the same time.

“We talked to our pre-med advisor,” at Azusa Pacific University in California, Sammie Roberts says. “He told us that there isn’t a formal way to apply together and that we were kind of rare in his experience. He advised us that our best policy was to be open with admissions committees we interviewed with that we were in this together.”

They were relieved when CU School of Medicine accepted them, but they also were aware that medical school’s long study hours and clinical rotations have a reputation for taking a toll on relationships.

“There were a couple of naysayers who told us we might not be making the right choice,” Sammie says. “We definitely decided that we would prioritize our marriage.”

Shortly after starting their first year, Sammie and Joel discovered a student organization that supports medical students and their families

l ’Bout Couples (ABC) hosts gatherings where students address commonly asked questions: How busy are we actually going to be? Where can we find ? What neighborhood should we live in? Which third-year rotations are family-friendly? When is a good time to have a baby or plan a wedding? How much will I see my family?

“We really try to emphasize that even if both people aren’t in medical school like we are, the whole family is actually in medical school because everyone is affected by it,” says Joel Roberts, co-president of ABC

e difference between single and married students can be significant.

“A lot of single class members are going out partying after tests,” he says. “The majority of students with families are using the opportunity to finally catch up with their kids and their spouse.”

In his graduation address this spring, Dean Richard Krugman, MD, told graduates that previous generations didn’t have to worry about balancing family and medicine. When his father was in his medical residency 75 years ago, interns received half a day off every two weeks and were not allowed to be married. During Krugman’s residency, students could be married but rarely saw their families because they worked 36-hour shifts with 12 hours off in between

e School of Medicine Office of Student Life does not keep track of the number of students who are married or have children, says Terri Blevins, assistant dean of student affairs, but she believes more students have families than in previous decades. That might be a result of the changing of medical school.

“We take some older nontraditional medical students—many are having a second career,” Blevins says. “They’ve spent 10 or 15 years in their first career and they’re likely to have family and children.”

Each year, ABC hosts barbecues and other events so students and their families can get to know each other. The School of Medicine holds an annual Valentine’s Day dinner to support couples.

“We were shocked in a way that it was so family-friendly here,” Sammie says

e, 26, and Joel, 27, will couple match in the Spring: Sammie in pathology and Joel in anesthesiology. They say they made it through nearly four years of medical school with their relationship intact and healthy, but it came with a price. She feels she didn’t get to know her classmates as well as she might have had she been single

“I guess I’d tell people that they have to expect to sacrifice something, and that’s OK,” Sammie says. “But I think it’s important to know your priorities going into medical school so you don’t end up sacrificing something that you hadn’t intended to.”

Developing a support network is important, too. The Roberts’ church and family were helpful when times were hard.

“We could ask people to bring us food when we didn’t have time to make anything. Our parents dropped by casseroles. That allowed us to have time to be together and not be as stressed. That outside support is really critical.”