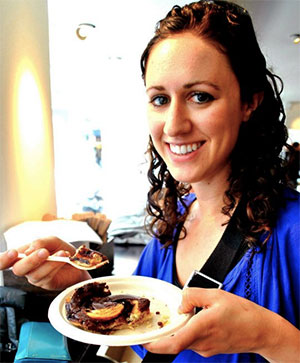 (May 2014) “You know, he’s really upset with you for interrupting his sorbet earlier.”

I looked up from my computer and realized that the ICU nurse was addressing me.

“Yeah, he’s not happy about what you did this morning.”

I stared at her, somewhat dumbfounded.

Mr. G was the team “peach,” as my intern dubbed him, a man with disdain running through his veins and a tongue sharper than a razor’s edge. He was a long-term alcoholic with pitting edema, a belly more distended than the tightest of drums and a disposition like an icicle. He made no attempts to hide his dislike of our team, and of the hospital at large. He rolled his and spoke in terse utterances—complain, , . He was uncomfortable and angry. You did not have to be around Mr. G long to understand that this was a man with a lifetime of regrets. This was a man at his very end.

Of course, Mr. G was my patient. For some I thought that if I just lightly, all would be well. I have always been easy to get along with, after all. I would smile and be courteous in my interactions and he would tolerate me, the annoying medical student who made him repeat exams when he didn’t feel like doing it. That sounded reasonable, right? Not too much to ask. For the first couple of days after his admission, all seemed to be going well. He grumbled at me when I came in during the mornings, but did nothing more.

But now he was upset with me? Because of sorbet? Because I had requested that he stop eating his lemon sorbet for a minute while I listen to his heart and lungs?

I pondered the situation for a minute. I hadn’t even thought twice about it when I made the request. I did my usual song and dance: smiled and said, “It’ll only be for a minute. I promise!” I did my exam and left the room, thinking nothing of it. Was I being insensitive? Was he being ridiculous? What was this? I’d never upset a patient before. I don’t upset people.

Then a resident approached me, “So I heard about Mr. G and the sorbet. You really shouldn’t worry about it. He’s an old, cranky man. I promise it’s not you. It’s him. Forget about it.”

And later that afternoon I read a note that Palliative Care had left after visiting Mr. G, halting when I saw the phrase “lemon sorbet” toward the end. I moved in closer to the computer.

“The patient requests that he be allowed to eat his lemon sorbet without any interruptions from his health care team.”

I paused. Now the entire palliative care team knew about my lemon sorbet incident? lemon sorbet was one of his final requests? I was embarrassed. I was angry. I was upset. Had I been pushy when requesting that he put down his sorbet? I suppose that I could have come back a few minutes after he had finished eating, but I was in a rush to get done with my pre-rounding.

I had sacrificed his comfort on behalf of my stubborn determination to accomplish my morning tasks. Efficiency, after all, is the name of the game in medicine. Succumbing to the lemon sorbet demand and sacrificing efficiency is not part of the list of competencies that traditionally earns you honors.

There was something more to this. Mr. G was at the end of his life and simply wanted to be treated with respect. It had all seemed so silly to me, this big fuss over sorbet; of course that’s easy to think when you’re 26 and death isn’t nipping at your heels. Lemon sorbet is a thing to be had next summer, some other summer. Mr. G had no more summers.

I dared to presume that I understood the value of lemon sorbet in a man’s life and equated it with my own. Who really knows what memories a lemon sorbet can hold? It could be an entire lifetime’s worth. All I had to do was ask and listen.

I stepped away from my computer. Humility is a big part of doctoring. Much bigger than I could have ever imagined. I strode over to Mr. G’s room. I paused. Swallowing my pride, I knocked on the door and walked into the room. I spotted the empty lemon sorbet carton out of the corner of my eye.

Lindsay Heuser is a member of the Class of 2015 at the School of Medicine. She is originally from Colorado Springs and earned a BA in chemistry from Bowdoin College. She plans to pursue a career in psychiatry. This essay originally appeared in The Human Touch, a journal of poetry, prose and visual art by students, faculty staff on the Anschutz Medical Campus.
You can read her work Heartbeat: A Poem in Three Parts →