Getting to the Root of Leukemia 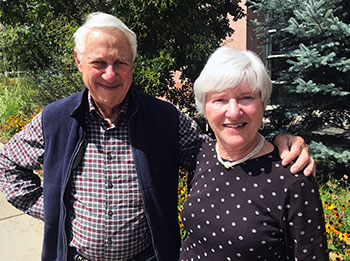 (April 2019) The day before Joel Rutstein planned to leave for a week-long trip to Hawaii with his wife, Barbara, and their grown children, an oncologist in Fort Collins gave Joel bad news.

In the course of his annual checkup, Joel’s physician noticed a trend of declining hemoglobin in his blood and referred him to an oncologist for a bone marrow biopsy. Joel learned the result that day before Hawaii

“I said, Barbara, I think I just got a death sentence,” Joel says. “The oncologist said it was very bad and that I probably wasn’t going to live.”

They went to Hawaii anyway and Joel and Barbara agree: It was not their best vacation.

Joel’s biopsy showed he had a malignant condition called myelodysplastic syndrome, or MDS. In Joel’s form of MDS, blood-forming cells in bone marrow had mutated so that instead of making healthy blood cells, they were making dangerous, immature blood cells, called blasts, which were accumulating in his blood. If Joel’s bone marrow passed 20 percent blasts, he would technically no longer have MDS. He would have acute myeloid leukemia (AML).

For patients under age 60, treatment for AML includes chemotherapy and, if needed, bone marrow transplant. Patients over age 60 are often unable to withstand such aggressive treatment. Despite being unusually fit – Joel swims most days at the noon-hour faculty and staff fitness program at Colorado State University, where he spent his career overseeing the library system – his age made him an imperfect candidate for treatment.

“When I was diagnosed, we heard about other people we know who had MDS,” Joel says. “One of them was a woman my brother knew, whom we had met, who was living in the Boston area. She started getting chemotherapy. Her MDS morphed into leukemia and she eventually died.”

Once Joel’s MDS progressed to AML, his prognosis would be poor, with survival likely measured in months. Thus his oncologist’s pessimism.

But south on I-25, on the Anschutz Medical Campus, a treatment program had grown up from groundbreaking research targeting cancer stem cells that create MDS and eventually AML.

The Science of Leukemia Stem Cells

“People had been talking about the idea of leukemia stem cells (LSCs) since the 1950s. In the mid-1990s, they finally found them,” says Craig T. Jordan, PhD, investigator at CU Cancer Center, chief of the Division of Hematology and the Nancy Carroll Allen Professor of Hematology.

At that time, Jordan, who had completed school and training at Berkeley, Princeton, and M.I.T., had just taken his first independent research position as an assistant professor at the University of Kentucky. His previous studies had focused on normal blood-forming stem cells, called hematopoietic stem cells, or HSCs. Now, Jordan was intrigued by LSCs, and he shifted his research to focus on understanding and eradicating these cells.

What is an LSC? Think of it like an HSC with a pirate’s eye patch – if you can recognize the eye patch, you can distinguish beneficial HSCs from dangerous LSCs. In the year 2000, Jordan found it – an “eye patch” in the form of a cell-surface protein called CD123. LSCs coat themselves with CD123. HSCs don’t.

“That gave us the ability to separate normal HSCs from leukemia stem cells. Once you can separate them, you can study the differences between them,” Jordan says.

Jordan started looking for the LSC Achilles’ heel. He was seeking not only a difference like CD123, which marked LSCs as distinct from HSCs, but a difference that LSCs needed to live. Such a difference could then be targeted with drugs that would kill them.

It turned out to be surprisingly easy to find differences between HSCs and LSCs. There were literally hundreds of them, creating a new problem. Stem cells within one leukemia proved to be incredibly diverse, and there seemed to be no common difference.

“We found lots of things that were different and lots of ways to kill them, but few ways to kill all of them,” Jordan says. “If you kill 99 percent of the LSCs driving a leukemia, you can knock the disease down temporarily, but that little bit’s always going to grow back.”

In order to attack all LSCs, Jordan needed to find the common weakness shared by all of these cells and not also shared by the HSCs, which he didn’t want to kill.

While Jordan was picking apart the science of LSCs, Daniel Pollyea, MD, was a hematology fellow at Stanford University.

“Fellows had to present journal articles at a weekly meeting, where faculty enjoyed grilling the presenter to ensure he/she understood the paper,” Pollyea says. “When it was my turn, the paper I chose happened to be from the lab of Craig Jordan, describing a new therapy he was developing to target leukemia stem cells. Over the course of my preparation I learned that paper very well, and starting then, became fascinated with the biology of leukemia stem cells and the potential to target them in the clinic.”

After Pollyea finished his fellowship, he accepted a position as junior faculty at CU Cancer Center. He was soon followed by Clay Smith, MD, an established leader in the study of blood stem cells, who was recruited as program director of CU’s Blood Cancer and Bone Marrow Transplant program.

“There were a couple of important reasons I came to CU,” Jordan says. “The first was the opportunity to build a program with Clay Smith, whom I had known for 20 years. The second big reason I chose CU was the opportunity to work with Dan Pollyea. It was clear from the first time we met that he would be a great partner in developing novel AML therapies.”

In the subsequent five years, Jordan, Pollyea, and Smith have built a program targeting the leukemia stem cells at the root of blood cancers.

“We’ve had an extraordinary partnership,” Jordan says. “Me in the lab, and Dan and Clay in the clinic. We live in each other’s worlds as closely as we can. That’s allowed us to do really deeply integrated research. We do things in the lab that are informed by the clinical problem, and then when things move into the clinic, we have an unprecedented level of depth with the patients.”

One of these patients is Joel Rutstein.

“In February 2016, we got blood count results back and everything was shot to hell,” Joel says. “Normal blood cells had all dropped to practically zero. The MDS was morphing into leukemia.”

Joel’s request for a second opinion brought him to CU Cancer Center, where Pollyea explained the options: They could treat Joel’s leukemia with chemotherapy, but the stem cells that survived would likely restart the disease or Joel could take part in a new clinical trial open at CU and a Daniel Pollyea, MD few partner centers around the country, adding venetoclax to standard-ofcare treatment.

First was a course of the commonly used, low-intensity chemotherapy, azacitidine, to knock down the bulk of the cancer cells. Along with chemotherapy, Joel took the drug venetoclax to block the leukemia stem cells’ ability to make energy. After the short course of chemotherapy ended, Joel stayed on venetoclax.

“Blood counts recovered, blast counts went down. Eventually, by early fall, blood counts and even hemoglobin were back to normal,” Joel says. His only side effect has been diarrhea a few times per month. “Since I can live a normal life with this drug, I don’t have any interest in going off of it,” he says.

In all, there were 33 patients treated on this round of the clinical trial. All were older than age 65 and ineligible for the usual chemotherapy used to treat AML in younger patients. Thus all 33 patients had very poor prognosis. In this group, 91 percent of patients achieved what Pollyea calls an “overall response,” many of whom continue to be in durable remissions.

A New Paradigm for AML Treatment

Since the early 1970s, chemotherapy and sometimes bone marrow transplant have been the standard-of-care for AML. The results have never been anywhere near perfect. Because the side effects are lifethreatening, this imperfect treatment has been impossible for older patients. Now the Jordan’s lab science and the results from this clinical trial are leading to a new paradigm for the treatment of AML, offering new hope for all patients.

Members of Jordan’s lab, Courtney Jones, PhD, and Brett Stevens, PhD, have pinpointted the LSCs’ source of energy. Instead of glucose, these cells depend on “burning” amino acids. These researchers also have shown why ventoclax works: It stops the cells’ ability to use amino acids for energy. Their results are published in the journal Cancer Cell.

Meanwhile, others in Jordan’s lab have shown that the clinical trial did, in fact, target LSCs in these patients, and that the trial did this by nixing LSCs’ energy metabolism.

“Patients’ results showed that the trial was working, but we also needed to show why it was working – that it wasn’t just some other effect of adding venetoclax to treatment. Our work shows that the reason patients improved is because we turned off LSC metabolism and specifically killed these cells,” says Stevens, whose study and the results of the clinical trial are published in the journal Nature Medicine.

Based on the clinical trial results here and at other cancer centers around the country, venetoclax is poised to receive FDA approval for the treatment of AML.

“There is still plenty of work to do for patients with AML,” says Jordan. “Even though the early trials have shown major improvements, it’s clear that not all patients are cured.”

But the team is optimistic that patients with AML will soon have even more options.

“When I was a fellow, I learned how to tell AML patients they were going to die,” Pollyea says. “Now I’m talking with my patients about their vacations and how their grandchildren are doing. It’s a fundamental change to the treatment of AML.” Joel Rutstein is one of them: “My story isn’t a real exciting one. There’s no car chase, no femme fatale. I don’t know why I happened to get diagnosed when I did or why this treatment happened to come around when it did. I just know that if I weren’t on this drug program, I wouldn’t be here.”​