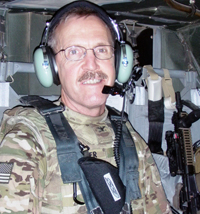 Dr. Frederick “Fritz” Karrer spent three months this year patching up soldiers, children and even enemy fighters at Operating Base Salerno in Khost, Afghanistan.
He dodged aggressive krait snakes and lumbering two-foot long lizards, befriended his first patient, a kid called “Hot Rod,” and tested his surgical skills.
A professor of surgery with the CU School of Medicine, Karrer decided after the 9-11 terrorist attacks to join the Army Reserve. He did a stint in Hawaii and another in Iraq, but neither rivaled the medical action he shared with other Reserve physicians at Salerno. A Children’s Hospital Colorado pediatric surgeon, Karrer sent home observations in weekly emails, starting in June. You can read his full blog or see an edited account of his experience below:

Within 6 hours of arrival, we got our first patient, an 8yo Afghani boy run over by a civilian truck. He had been "treated" at the local hospital. He had an open femur fracture and extensive soft tissue injury of both lower extremities.
All they had done was splint his legs and wrap them. The next day, we had 3 Afghanistan Nationals brought in after being injured by an IED. One was a 9yo boy peppered with shrapnel over his anterior surface. He had been asked to roll a up to some of the Afghan security forces. The "bad guys" had hidden explosives in the and when he got close, they detonated it. What's wrong with these people? After a chest tube and exploratory laparotomy with small bowel repairs/resection and for shrapnel perforations, he was evacuated to Bagram (Air Base).
Two days on the job and two serious pediatric trauma patients! Looks like I'm in the right place.

Last week, we lost two Apache helicopter pilots. It's not clear if they were shot down or had a mechanical failure. Shortly after, we received one of two insurgents that were placing an IED on a local road. Our patient had been seriously wounded. You can imagine the internal ethical/moral conflict among the staff when providing medical care to the "bad guys" right after two of your own have been lost. The Medical Rules of Engagement direct that we provide care without distinction. Priority for treatment is based solely on medical urgency, regardless of whether or coalition forces, enemy combatants or host-nation civilians. It's hard, but it's the right thing to do. 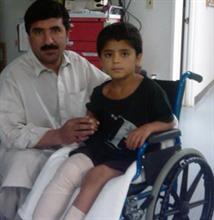 Last weekend, (we had) several multiple casualty events (4 or more). One was a suicide bombing at the Khost Police Station on Saturday that wounded over 20 and killed 3. We received 7 of the wounded including a 12 yo boy who took some shrapnel through his flank and lost his right kidney as a result. Sadly, May was the deadliest month for civilians in Afghanistan since 2007. They documented 368 civilian deaths and 593 injuries in May due to the ongoing conflict. June doesn't seem to be any better.
I've attached a photo of our patient from the first week, who was run over by a local truck. We call him "Hot Rod" (right) because he is always zipping around in his wheelchair.

I had an opportunity to see several children in clinic this week. One was an injury caused by an old fashioned washing machine. The little girl got her hand caught in the wringer, which "rolled her in" up to the armpit and then just kept rolling with a resultant traction burn/degloving of the skin under her arm.
I plan (a) skin graft next week and our orthopod will put her in a shoulder cast to immobilize her.
"Hot Rod" is getting better and now motoring around the wards with his pediatric wheelchair and a walker. This deployment, more than any other, it feels like I am well located to utilize my pediatric surgical training. 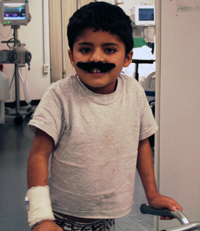 We've done over 60 cases since we got here, and that doesn't count the dozens of for dressing changes, washouts and minor procedures. Hot Rod has been here so long he's gone through puberty (right) but was finally discharged Friday. We had 2 [patients] from an RPG explosion.
Sadly, one was a 2yo with multiple fragment wounds, most non-critical, but one had penetrated her skull. We shipped her off for the neurosurgeons (in Bagram) to evaluate. I think she may do alright. Still, seems so senseless!
One of the finds of the week was the Salerno Golf Club (left). Well, really just a hitting cage. I'm confident my practice drives are over 250 yards and right down the middle.
There are plenty of golf clubs and balls, but the hitting mat is in tatters. My friends at Pinehurst (Country Club) have arranged to send a mat that we can actually hit off of without having to chase it after every shot. That will be ! 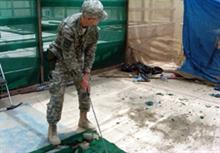 One of the more unusual (cases) was an Afghan . She was 25yo, supposedly shot by our friendly forces unintentionally, so-called collateral damage. I guess I wasn't prepared for how to deal with the whole cultural business. She was reluctant to let us examine her. After putting up privacy screens and a little vitamin V (Versed), we found an entrance wound in the low left chest, but no exit wound. The first chest x-ray showed no bullet. Where did it go? We explored her and found that the projectile was free in the peritoneum, resting on the uterus (right).

She recovered and was transferred to the Khost Hospital. If it wasn't weird enough to find a large caliber projectile free in her abdomen, in the opinion of several soldiers, this did not come from one of our weapons. While not lucky to get shot, she's lucky to be alive with that size of .
We saw Hot Rod in and his wounds are coming along, still not closed but he is ambulating without his walker and looks cute as ever. 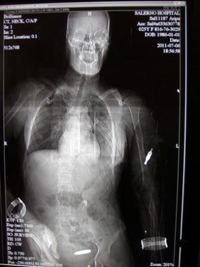 I am taking a language class in Pashtun, the official language of A'stan. I find the language very difficult. More fascinating has been learning about the Pashtun culture our teacher, also one of our interpreters. Pashtuns are known for their hospitality, called . Guests (travelers, neighbors, relatives) are entertained, housed and fed for as long as they want.

Beginning Friday, we began to receive patients in waves. Several from IED attacks and two bunches from [mortars or rockets]. If they come in more than 5 at a time, it can tax the resources of our little hospital. Command then notifies medical providers and other to go to the hospital. Dozens of helpers (Docs, Vets, PAs, medics, nurses just regular soldiers) pitch in. Saturday, we had cases lined up and we did them two at a time until everyone was taken care of.
"Hot Rod" returns twice weekly for dressing changes. His wounds are healing and he is ambulatory with only a little cane now.
One of the more unusual cases this week was an Afghan soldier that had a colon resection and colostomy a couple months ago for a GSW (gunshot wound). He had been doing but returned with terrific abdominal pain. We waded through some adhesions only to find what looked like a drain left behind by the previous surgeons. We all jumped back when we realized it was actually a worm (left) that had eroded through the bowel and was writhing around in the upper abdomen. Yick!

This was a crazy week. Starting on the Friday before Ramadan, we started receiving patients in waves. We saw 69 patients over that stretch. It only takes one bad one to chew up a whole day. A soldier came in GSWs to the butt and leg. We evacuated a belly full of blood and found one of the bullets had (penetrated) the pelvis. The pelvic veins were bleeding too fast to even see where it was bleeding from. We got some control with ligation of the internal iliac artery, but eventually packed and got out. Problem was, he also had a GSW through the leg with a shattered tibia. He received over 40 units of blood products, 17 of which were whole blood, something you almost never give in the States. When our blood supply runs low, we call in soldiers for an on-the-spot blood drive and dozens show up. Fortunately, he was in good shape when he was about 24 hours later.

I’m on my way back now.
(Before I left Khost,) a group of young Afghan males started throwing rocks at US soldiers in the marketplace. Then out of the crowd came a grenade. We received a 10yo boy with not a mark on him except for a small puncture wound on his forehead. A tiny fragment passed through the front of his skull and lodged in the back, crossing the midline. He survived about 48 hours, but there was nothing anyone could really do for him. Whether he was a participant or an innocent bystander remains unknown, but regardless, it seems like a senseless waste of a young life.
One of the redeeming aspects of making it to Kuwait is the opportunity to turn in my weapon. My 9mm Beretta pistol has been my constant companion and my ball and chain. You are required to have your weapon with you at all times (except) in the shower. We didn’t have to wear it in the OR but it had to be locked up nearby. It only weighs 2.6 pounds but when you add the 3 magazines with 15 rounds of ammo each, it’s a pain to carry around all day. It’s very uplifting not to have lug it and to worry about it all the time.