CU Researchers find links between Down Syndrome and Immune System

(May 201 8) Researchers from the University of Colorado School of Medicine are conducting breakthrough research indicating that Down syndrome could be considered a disorder of the immune system.

The findings announced in the journals eLife and Scientific Reports are a significant development in understanding Down syndrome.

“Down syndrome has been classified as a mental disorder, as an intellectual disability, as a brain condition,” said Joaquín Espinosa, , director of the Linda Crnic Institute for Down Syndrome at the CU Anschutz Medical Campus. “And that’s fine, those are all fair labels. But you can also understand Down syndrome under a different light.”

In between meetings with his laboratory’s researchers on a busy day last January, Espinosa rattled through a list: 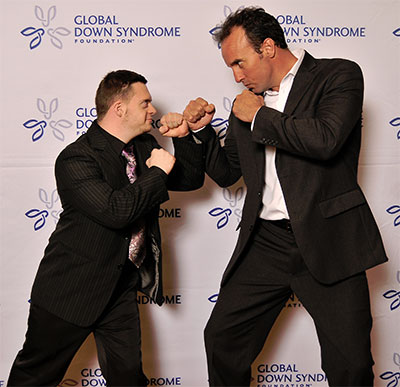 Then, he ties together the conditions on the list: “So Down syndrome is many things,” Espinosa said, “and then when you put every one of those through the prism of an immune disorder, it makes sense every time.”

Michelle Sie Whitten, president CEO of the Global Down Syndrome Foundation, which has funded Espinosa’s research, called the work a “game-changing discovery.”

That discovery is now the foundation for a scientific program that could have health benefits for all.

For Espinosa, that is certainly true. A cancer biologist, he CU Boulder in 2004 and he continues to serve as co-leader of the CU Cancer Center’s molecular oncology program. But along the way, he applied for a grant offered by the Crnic Institute.

“The Crnic Institute had recruited Dr. Tom Blumenthal as executive director, who was my chair in Boulder,” Espinosa said. “What he did was create a grant program for scientists who were within the University of Colorado. I applied. I knew Tom very well and I wanted him to do well. I was super busy at the time with my cancer research. I didn’t necessarily have an interest in Down syndrome, but I thought OK, this seems like a good opportunity to start a new line of research.”

That project opened a new path in Espinosa’s career, first as associate director for science at the Crnic Institute since 2015 and now as its executive director since July 2017.

“I’m not an immunologist. In fact, to some I was trying to stay away from immunology. I think it’s so complex and sophisticated and I had my plate full the complexity of cancer biology. But the data from that first grant and from experiments we did , and from other experiments that other people in the Crnic Institute were doing, started converging – dysregulation of the immune system in people with Down syndrome.

“And now this has become the centerpiece of a research program, trying to understand how this immune dysregulation contributes to the many facets of Down syndrome.”

Triggering the immune system to fight cancer has been intensified of researchers for decades, but they also know that an out-of-control autoimmune system has detrimental effects. 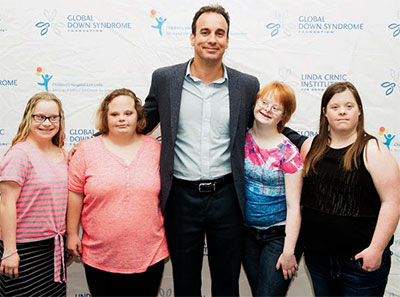 “It makes sense that a person who has a hyper-activated antiviral response will have a tendency to autoimmune conditions,” Espinosa said. “The interferon pathway, the same set of molecules that we use to fight when deregulated, will give you an autoimmune condition because they attack healthy cells.”

Espinosa cites health conditions, such as leukemia congenital heart defects, that can result from overactive autoimmune systems and that are more common among people with Down syndrome. Additionally, hyper-activation of the immune system in the brain is toxic, killing neurons.

Connecting the dots, though, is much harder than it sounds and more work needs to be done before and efficiency of any therapies can be determined.

The Human Trisome Project at the Linda Crnic Institute is designed to be the largest and most comprehensive study of why individuals with Down syndrome, also called trisomy 21, are protected from some health conditions, such as cancer, while highly predisposed to others, such as Alzheimer’s disease. For the project, the research team is recruiting persons between 6 months and 89 years old, with or without Down syndrome.

“You’re looking at as much as you can, casting a big net and then asking, ‘What are the things that are different in people with Down syndrome relative to our control group of individuals that don’t have Down syndrome but as far as we can tell they don’t have any other differential variable in the control group?’ When we do that, in every case, at the top of the chart is the immune system and specific aspects of the immune system. “

By identifying the potential source of concern, options for therapies can be considered. One way is to consider how the human body naturally blocks interferon, proteins that activate usually to respond to a virus or other pathogen. The Crnic Institute is looking at proteins that neutralize interferon and developing experiments to study them.

Getting a good map and charting the multiple paths is a daunting task that will require help from many supporters. Supporters include the Global Down Syndrome Foundation, the Anna and John J. Sie Foundation, the School of Medicine and Biogen.

Historically, the primary federal agency providing funding research on Down syndrome has been the National Institute of Child Health and Human Development because the syndrome was originally cast as a pediatric condition. But today, people with Down syndrome commonly live into adulthood, with some living into their 60s.

Espinosa hopes to build on the understanding that there are health benefits for all that can result from the Crnic Institute’s work and that deserve support from other federal agencies. Earlier this year, U.S. Rep. Mike Coffman, who represents the congressional district that includes the Anschutz Medical Campus, introduced legislation directing the U.S. Department of Veterans’ Affairs to establish Alzheimer’s disease research, education, and clinical centers that include a scientific focus on the connection between Down syndrome and Alzheimer’s disease.

“It’s what we call therapeutic leverage,” Espinosa said. “As you’re trying to help people with Down syndrome, you end up learning about other conditions and most likely helping typical people with related conditions. The immune system is everywhere in your body, so it has this power either making trouble or fixing things for a large number of things.”