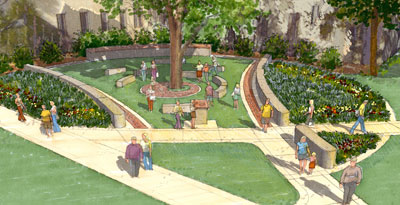 (May, 2013) Plans for a Donor Memorial Garden began in 2002 when Stephen Sherick was in his first year of medical school.

Deeply appreciative of those who donated their bodies to science, Sherick and several classmates thought a permanent memorial would underscore their gratitude.

Many design iterations followed – from a large amphitheater where the annual Body Donor Ceremony could be held each spring to smaller options like a bench or tree.

More than a decade later, the final plan has become reality and  Sherick, who conceived some of the more grandiose proposals, is satisfied.

“It’s right down the middle – not as ambitious as I hoped, but not as small as I thought it would end up either,” says Sherick, a graduate of the class of 2006. “It’s a nice foundation, and if we get more money over time we can add to it.”

The gratitude students feel toward body donors speaks to the 11-year effort by Sherick and several others students as well as faculty and Dean Richard Krugman, MD, who used funds from the sale of the Given Institute in Aspen to help pay for the garden’s $250,000 cost.

“For more than 80 years the state of Colorado has entrusted the School of Medicine with overseeing the State Anatomical Board,” Krugman says. “During that time, thousands of Coloradans have donated their bodies so our students could learn basic anatomy firsthand and become better health care professionals. The students and faculty believe that a permanent garden memorializing these gifts is an important way in which we can show our gratitude.”

Students work on cadavers in their first year of medical school to learn basic anatomy.

“It’s a real mix of emotions initially,” says Spencer Tomberg, a fourth-year medical student, who is one of the garden’s current proponents. “They hide the hands and the face and feet at first because those parts of the body are really personal. Once you start exposing them, which you do in time, your connection really starts to grow. You have to try to balance respect for the person with your inquisitive nature.”

Because the donors’ names are not provided, many students give the body a name and bring flowers or other tokens when the 12-week class is finished.

“In our case, we guessed the age of the donor, and then looked up the most popular names from that time period and gave her a name. During the (donor memorial) ceremony, someone stood up and told a story about a lady in that same age range with that same name. Some of us looked at each other and wondered if we really had guessed her name right.”

Most students attend the annual body donor ceremony each spring and are joined by family and friends of donors.

“I don’t know if you’ve ever been to the ceremony, but for me personally, I think it was the very best moment of my four years of school,” says Sherick. “You get to hear from the families of the people who you’ve learned so much from. There is not a dry eye in the house.”

The Donor Memorial Garden will open this spring on the southeast lawn in front of Building 500. Each class that has been involved in the fundraising and design will be represented with a paver engraved with a quote voted on by class members.