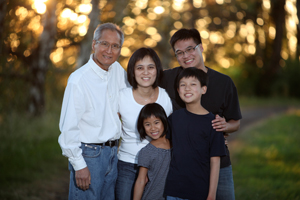 (May 2, 2011) Alice Chen can clearly describe the reaction of her husband, Yang Chen, MD, the day in February 2008 when he was diagnosed with Stage IV lung cancer.

"He said to me, ‘It was the strangest thing. I had always heard about the peace that passes understanding that God talks about in the Bible. But the moment I saw the X-ray and realized what it said, the only way I can explain it is that God came in and gave me that peace.’

"Through all the decisions that we had to make in the last almost three years, that peace never left him."

At first, Dr. Chen, then director of the CU medical school’s Digestive Health Center and Endoscopy Services, had to keep the news quiet. He could not tell his staff because doctors from around the world were coming the following week to learn his latest techniques in advanced endoscopy. He did not want his staff to panic during a time that was already highly stressful.

Dr. Chen also knew he had to wait a week before breaking the news to his three children. His leadership responsibilities in running this course meant that he could not be home to help his children process the devastating news.

So, when he was ready, he told those close to him. And he blogged.

Dr. Chen, 58, a non-smoker, had seen many patients go through cancer treatments, so he knew the process ahead would be grueling.

"In his limited time remaining, he wanted to show in real time the reflections of a person who is going through the journey," Alice Chen said. "He wanted to show how to integrate the eternal, spiritual issues and the emotional ones as you walk through a journey like that."

Six weeks ago I began noticing pain in my lower legs and in the soles of my feet, which is triggered by walking or standing for prolonged periods of time. After one particularly strenuous day at the hospital, my 6-year old daughter watched me gingerly limping across the living room and asked an astute clinical question: "Why is daddy waddling like a penguin?"

And there is medicine:

(T) constellation of new symptoms are consistent with involvement of cranial nerves 7 (facial), 8 (auditory) and 9 (taste). I am now taking the steroid Decadron (8mg twice a day) to decrease any inflammatory swelling around these cranial nerves; I am experiencing the side effects of insomnia, an agitated feeling, and hiccups.

Remarkably, he worked through his entire illness, even attending a research and development session one week before his death, Alice Chen says.

"He taught a lot of us about courage and faith," says Hugo Rosen, MD, head of the Division of Gastroenterology & Hepatology.

As was typical of Dr. Chen, he comforted others during his illness, helping Rosen deal with the loss of another friend and offering his shoulder to nurses when personal issues arose.

"I had the idea that he had a great peace," Rosen said. "I think everyone around him was more worried about him than he seemed to be."

After more than two years of treatment, Alice Chen asked her husband, "What types of cancer treatments have you not undergone that you've seen your patients go through?’"

Read about our 2018 graduates and see the slide show of the celebration.