Wearing a White Coat and a Uniform 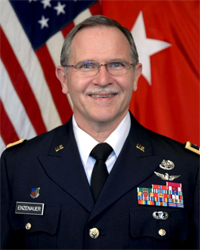 (May 2, 2011) One weekend a month, Robert Enzenauer, MD, a professor in the medical school’s Department of Ophthalmology, trades his white coat for a different uniform. In July 2010 he was promoted to brigadier general, assistant adjutant general for space and missile defense with the Colorado Army National Guard. Colorado has the only National Guard Space Battalion in the United States and is one of only three states with a ground missile defense unit. Enzenauer, chief of the Pediatric Ophthalmology Division at The Children’s Hospital and also with of Colorado Hospital, spoke with freelance writer Cynthia Pasquale.

Question: Following high school, you went to West Point. Why did you choose a military academy?

Answer: Vietnam was going and my draft number was 25. My father was a house painter and he’d never gone to college so he really had no savings and couldn’t pay my way for school. It was a way to college. I had also wanted to go to West Point since I was 10 or 11 because of the people who graduated from there: Ulysses S. Grant, Robert E. Lee, Douglas MacArthur, Eisenhower, Omar Bradley – those guys. I thought I wanted to be one of those guys.

A: I went to medical school at the University of Missouri under a program designed during Vietnam to reward people who did well. I took a pediatric residency at Tripler Army Medical Center in Hawaii. I certainly was proud that I did that, but it became very clear I didn’t like the day-to-day life of a general pediatrician. So I practiced pediatrics for two years and said, “To heck with this—I want to be an ophthalmologist.” The Army said, “The heck with you; you’re a pediatrician and we got you for a long time because of all the training we’ve given you.” So it was then that I volunteered to be a flight surgeon with Fort Campbell, Ky.

Q: What got you here?

A: I had come to Fitzsimons Army Medical Center and, besides being the chief of ophthalmology, I was also the flight surgeon. That’s when I met the guys from the Colorado Army National Guard. They had a lot of pilots on flight status but didn’t have a flight surgeon, so I would help out and do their flight physicals and fly with them to get my flight time. I love it here. It’s a great place to live and work. The Children’s Hospital is in the top 10 nationally and I believe will very soon be No. 1 or 2. One of the reasons I’m passionate about academic medicine is that it’s like being a parent. When you graduate a resident to go out to be an ophthalmologist, it is similar to your kids graduating from college and starting work.

Q: Can you explain what the National Guard Space Battalion does?

A: The space team deploys with a combat unit. They literally are special forces for computer geeks. There’s a team of six commanded by a major who download satellite imagery, infrared imagery—all kinds of stuff that will let the combat commander know if there are bad guys in certain locations.

Q: Is it difficult going from academic medicine to a military role and back?

A: I think it would be hard for a physician in private practice. But academic medicine and the Colorado National Guard are both large and obvious bureaucracies with clear hierarchical structures. During the week, I am the “chief” of the pediatric ophthalmology and adult strabismus division of the Department of Ophthalmology, run the ophthalmology department at the Children’s Hospital and report to people at TCH and UCH. In the National Guard, I coordinate activities for the space and missile defense soldiers and report to my “chief,” the adjutant general of the Colorado National Guard.

Q: What are you most proud of?

A: First, I’m very fortunate that I have two healthy, well-adjusted kids. Secondly, I spent a year in Afghanistan (as a flight surgeon for Colorado Army National Guard Special Forces) for Operation Enduring Freedom 2. They didn’t think they’d need an ophthalmologist because the war was over. About once a week, I’d get calls to do emergency eye surgery because I was the only military ophthalmologist in the country. Right before Christmas 2002, two of our soldiers got shrapnel injuries to their eyes when somebody threw an improvised grenade into their vehicle. I operated on them. I do believe their vision was saved because I was there as a flight surgeon. The next rotation, the Army realized that not having an ophthalmologist was a bad idea and put one in the country.