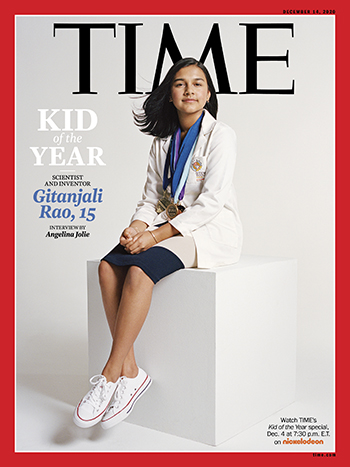 The 15-year-old scientist and inventor from Lone Tree, Colorado, was recognized for her projects addressing prescription opioid addiction, contaminated water, cyberbullying, and more, as well as for her desire to bring together a community of young innovators from around the world to help solve global problems.

“I think there’s something so different and unique about the ideas young people come up with,” says Rao, who previously won the 2017 Discovery Education 3M Young Scientist Challenge and was recognized on Forbes’ 30 Under 30 list. “We’re facing global problems that have never been seen before. It’s up to us to make a difference. We need to come together now more than ever to make a difference, and innovation is a necessity, not an option. We really have to grasp that idea, take advantage of it and go chase our dreams.”

Michael McMurray, PhD, associate professor in the Department of Cell and Developmental Biology at the University of Colorado School of Medicine, has known of Rao’s passion and curiosity for a few years now, ever since she approached him to become a mentor for her research into opioid addiction and opioid receptor cells. She conducted all of her research with McMurray and his team in McMurray’s lab on the CU Anschutz Medical Campus.

“Gitanjali immediately blew me away with her confidence, poise, and deep thirst for knowledge,” McMurray says. “Throughout our time together, it was always a joy to interact with Gitanjali and watch her develop into an even more sophisticated and creative scientist.”

Rao, then 13 years old, first conceived of the project when she learned of a family friend who was addicted to prescription opioids.

Her hypothesis? That some people have differences or mutations in their opioid receptor genes that cause them to be less sensitive to opioids. Those people would need a higher level of prescription painkillers to have the same effect on the body as people with normal receptors, putting them at higher risk for addiction.

“You can imagine a doctor prescribes some painkillers for a patient and recommends the patient takes a certain amount of those painkillers every day,” McMurray says. “The patient starts taking them, but the pain is still there because they have a different sequence of this opioid receptor gene, which makes the protein not respond as well to the actual opioid drug. So they end up taking more of the opioid then they’re supposed to, and the next thing you know, they potentially become addicted to it.”

Rao first approached McMurray to learn about polymerase chain reaction (PCR), a way to make copies of a specific sequence of DNA. But further research showed that since people with mutations in the opioid receptor gene actually create a higher amount of that gene as a way to compensate for the reduced sensitivity, the project changed directions. A device that could measure the amount of the opioid receptor protein in bodily fluids could detect people who made more of it and were therefore at higher risk for addiction. Rao fired up her 3-D printer and got to work.

“There are companies that make kits to specifically detect the opioid receptor protein already, but they’re somewhat more complicated,” McMurray says. “They require a big piece of equipment. What Gitanjali was basically doing is making a handheld version of that, which is a neat idea still. All of the engineering of the actual device she did completely on her own. She showed up one day with this little thing she 3-D printed, and I was like, ‘Wow, that’s really cool.’ She had designed a little computer chip that would go in there and programmed it and everything. That was kind of mind-blowing.”

As McMurray’s primary research, which has to do with the way cell proteins interact with one another, uses baker’s yeast cells as an experimental model system, he also helped Rao figure out a way to engineer the yeast to produce the human opioid receptor.
“It would be subject to much less regulatory red tape than trying to access human bodily fluids,” McMurray says. 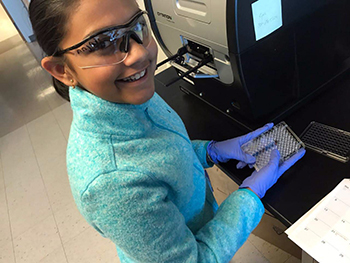 When the opioid project got sidelined by the COVID-19 pandemic, which temporarily ended her access to the lab, Rao got busy on another project, this one on how to detect biological contaminants in water. Both projects, as well as her anti-cyberbullying technology called  Kindly, which uses artificial intelligence to recognize potentially bullying language in texts and emails before they’re sent, are part of her effort to solve larger problems in the world.

“She looks around and thinks about problems and says, ‘Is there any way I could contribute to fixing those problems?’” McMurray says. “It’s things she realizes are important either because of things that have happened personally to her or things she sees as looming large in the world in general.”

Rao, who attends STEM School Highlands Ranch, previously designed a handheld device to measure lead levels in water after reading about the

environmental crisis in Flint, Michigan, that exposed thousands of young people to dangerously high levels of the element. She regularly leads online innovation sessions for young people around the world, encouraging them to find solutions and use technology to address critical issues.

“My goal has really shifted not only from creating my own devices to solve the world’s problems, but inspiring others to do the same as well,” Rao told interviewer Angelina Jolie for the TIME cover story. “Because, from personal experience, it’s not easy when you don’t see anyone else like you. I really want to put out that message: If I can do it, you can do it, and anyone can do it.”

The meaning of mentorship

Part of her message to young innovators is to find good mentors to help them with their progress, in the same way McMurray has helped her.

“He’s an awesome mentor to have,” she says. “He’s one of those people you can reach out to anytime, and he’d be willing to answer any one of my questions.”

She advises other young people to reach out to scientists with whom they are interested in working.

“Don’t be afraid to do it,” she says. “That’s why I’m where I am today, is just through cold emailing. Look at what’s in your town, look at what’s in your school, what are the local labs doing, who is majoring in something you’re interested in, and just shoot over an email. Be clear and to the point, and more often than not they will be willing to help you out some way.”

The benefits of mentorship aren’t just to the young mentees, McMurray says. He’s happy to give of his time and expertise to help a budding scientist — and to keep himself challenged. Rao has become not just a pupil, but a friend of the family who is an inspiration to both of his children, particularly his son, Luca, a fledgling inventor himself.

“It’s really intellectually fun for me to think about some little problem that is not something I usually think about,” McMurray says. “If this was an established researcher who was coming to me with this kind of idea and was looking for collaboration, I’d have to say, ‘I can’t really help with that,’ but the fact that it’s this young person who has all these amazing ideas, I just want to help. It’s such a great opportunity to be able to contribute to the development of this amazing scientist.”