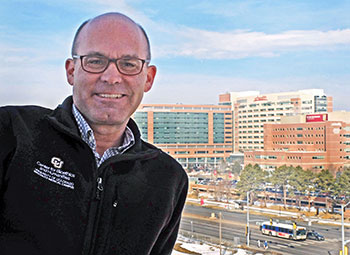 (April 2019) Eric Campbell, PhD, had one major concern when he agreed to create a bioethics research center at the University of Colorado Anschutz Medical Campus.

He worried he might spend months sitting alone in his office at the Fulginiti Pavilion while looking for research partners. Instead, when Campbell arrived in April 2018, he found campuswide interest in bioethics research.

“I was afraid I wouldn’t have anyone to collaborate with, but the exact opposite happened,” he said. “Within a very short period of time, I’ve had so many great interactions with people who wanted to see how they could add a bioethics focus to their research.”

A recruit from Harvard Medical School, where he was director of ethics research and associate director of the Mongan Institute for Health Policy at Massachusetts General Hospital, Campbell’s research into conflicts of interest and medical professionalism helped make national changes to policy and law. Focusing on building a new program, Campbell is hiring faculty and creating a program for postdoctoral fellows.

On his wish list is a doctoral program or track focused on bioethics for students in any school or college on the Anschutz Medical Campus.

“I want to bring in a bright group of empirical researchers in bioethics to work on externally funded research on topics important to the field of medicine in general, but also on issues important to the state of Colorado.”

With that group, Campbell says he expects to continue his own research, which, in addition to conflict of interest, has included examining why doctors fail to report colleagues who are practicing while impaired, and doctors’ reasons for not always telling patients the truth.

Even before he arrived at CU, he had his eye on three research projects that are particularly relevant to Colorado.

Since then, more than 60 physicians have written prescriptions for 200 patients. Campbell knows that identifying the participating physicians will be a challenge because their names are not public. There are about 8,000 physicians licensed to practice in Colorado.

But there are many questions to explore to better understand the motivations and consequences of the act.

“There has been no state-level study anywhere in the country looking into doctors’ experiences,” Campbell said. “Who are these (prescribing) doctors? Why did they get involved in this? What was their experience like? What did they find challenging? What did they find rewarding? How can policies and practices be changed to avoid problems? How do they think about engaging in this practice within the context of the concept of ‘do no harm’? And who are the doctors who won’t be involved in this and why?”

Bariatric surgery. With Thomas Inge, MD, professor of surgery and chief of pediatric surgery at the CU School of Medicine, Campbell has developed a grant proposal to study physicians’ role in advocating or discouraging bariatric surgery for severely obese adolescents.

Some medical professionals attribute obesity to mental health problems or bad parenting and, as a result, are reluctant to perform surgery on a child for what they consider a behavioral problem, he said.

“It’s an effective medical treatment that appears to be underutilized. About 1.4 million kids are potential candidates, but nationally doctors only do 1,200 a year.”

Marijuana. Some doctors have recommended marijuana to patients, and some physicians have advocated cannabis as a replacement therapy for highly addictive opioid prescriptions.

Even in states where marijuana is legal, physicians who recommend its use could be exposing patients to other legal risks. Such patients include those serving in the military, people with criminal records, non-American citizens, and people who have jobs for which testing positive for marijuana could lead to discipline or dismissal.

“Our goal is to understand doctors’ attitudes and behaviors and how they consider the legal and ethical implication when making important decisions on what to tell patients about marijuana.”

Campbell said he is drawn to controversial topics where little to no empirical data exists because he thinks that’s where he can make the most impact.

As a doctoral student at University of Minnesota in the mid-1990s, Campbell began studying conflict of interest following a mentor’s advice:

“Find a group of people you’re interested in who behave in a way you don’t understand and make that the subject of your dissertation.”

He found his study subjects close to home.

“My whole family is in the medical field in one way or another, so I’d always been interested in how physicians behave. I wanted to have an understanding of the nature, extent, and impact of relationships between academic researchers and drug companies. What impact do these things have, should they be regulated, should they be stopped, do they need to be reported?”

He credits Arthur Caplan, PhD, a widely published bioethics pioneer now at NYU School of Medicine, with steering him in the direction of empirical research instead of theoretical bioethics.

“I told him I wanted to be a bioethicist, and he said, ‘No, we don’t need any more philosophers.’

“He encouraged me to become an empiricist and do research on bioethical issues. Bioethicists will say whether something is good or not, whether you should do things or should not do things. The field as a whole doesn’t always consider the evidence behind those statements. Both are important, and when you put theoretical and empirical bioethics together, you make a strong whole.”

An interaction several years ago with a U.S. senator convinced Campbell that he was on the right path. Discussing medical conflicts of interest with the senator, the critical difference between theory and practice came to light.

“I was making an argument saying that some of these conflicts are inherently unethical and should be stopped because they are just not right.

Philosophizing might be a fulfilling academic exercise, but it wasn’t sufficient to convince policymakers when changes should be made.

“What changed practice and created policy was a whole body of published studies in the New England Journal of Medicine and JAMA (Journal of the American Medical Association) that showed these conflicts are frequent and have a bad impact on research and patient care.”

With former Harvard colleague David Blumenthal, MD, Campbell helped produce changes to conflict of interest policies for faculty at many universities. Their work also led to the Physician Payment Sunshine Act, which became part of the Affordable Care Act and now requires drug and medical device companies report payments to doctors in a public database.

“That’s an example of how over time our work changed policy and practice.”

Years ago, the mother of a child participating in a drug study surprised Campbell with her response.

She looked at me said, ‘I want this doctor to have every motivation possible to find something to cure my child.’

“I had never thought about that. But to this mom, this was a good thing. I carried that with me. The perspective of patients who see our work can be very different from what we see. Your vision as a researcher isn’t necessarily the vision of the people involved.”​ ​