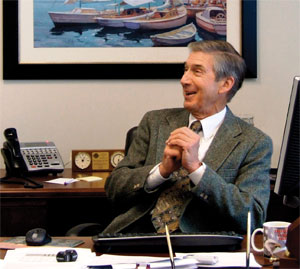 (May 2010) To understand John Sbarbaro’s gift, picture this scene from 1954 at the National Boulevard Bank in Chicago.

The bank is closed for the day. In the basement, Sbarbaro, an 18-year-old teller, is hanging out with the three ladies of the cleaning crew. Their mops and pails are set to the side. One stands with him in a dance position. They start to move—slow-quick-quick, slow-quick-quick. The young teller is learning to polka from the women who mop the floors.

“I can still see him,” says Marlene Sbarbaro, then 16, an assistant bank bookkeeper who, despite his dancing limitations, seven years later married Sbarbaro. “I thought it was so cute. You could see, everybody was his friend.”

Dr. Sbarbaro passed away on Aug. 30, 2011, at age 75. He was a professor of medicine and medical director of University Physicians Inc. (UPI).

He left his mark in many places. His main achievement at the CU School of Medicine was helping move it from a focus on research and teaching in the early 1990s to what is now “a significant and powerful clinical practice, which is critical to the support of the research and education missions,” says Dean Richard Krugman, MD.

“He had a clear effect on how the medical school looks and runs today,” Krugman says. “John was a masterful operations person.”

There was a complexity to Dr. Sbarbaro that made him difficult to pigeonhole—dedicated to helping people, friendly, never aloof, he was skilled at maneuvering through bureaucracy and, sometimes, just plain tough.

Dr. Sbarbaro grew up in Chicago, often working in his father’s funeral business. Early on it was clear what he was going to become.

“When he was a little boy his mother said, ‘ when you grow up you’re going to be a doctor.’ He wanted to make his mommy happy,” Marlene Sbarbaro says with a laugh. “How many children do that?”

He went to the Johns Hopkins medical school, then entered the Public Health Service, which sent him to Denver, and in 1965 began what would be a two-decade career (with a year out to attend the Harvard School of Public Health) at what was then Denver General Hospital.

A recent history of the hospital recounts how, when Dr. Sbarbaro was there, Denver General was tangling with competition from private ambulance companies. The hospital assembled a tape recording of people complaining about the competition’s poor service. Dr. Sbarbaro met with the companies and explained that his hospital would handle the 911 calls in Denver or reporters would get to listen to the tape. The ambulance companies ceded the turf.

Dr. Sbarbaro was vice president for medical affairs at St. Anthony Hospital Systems from 1986–89. A respected pulmonologist with key contributions to care and treatment of tuberculosis, his long relationship with the School of Medicine began in 1969. After he became UPI medical director in 1992, Krugman sometimes used him as a problem solver. If two department heads were quarreling, the dean sent in Dr. Sbarbaro.

“He was fearless,” Krugman says. “He believed the best way to manage change was to create a crisis. He would go around and toss little verbal Molotov cocktails. Then when he got everybody calmed down, he generally was able to get people to the position he wanted them in .”

Liz Kissick, a friend colleague at UPI, recalls Sbarbaro saying that life was a chess game, and if someone else was about to win “you kick the table, all the pieces fall, and you set the board again.”

Yet he was no cynic. “A serial optimist,” Kissick, UPI’s director of health plan development, calls him.

“He would stop by my desk and just chat,” Tom Frost, an administrative assistant in the medical school, recalls. “He acknowledged you and he engaged you. He was a shining light who came through the room. He elevated everyone around him.”

Dr. Sbarbaro became the person who reviewed treatment decisions for the health plan run by UPI. He’d approve a procedure—or not—depending on the medical evidence. It was a standard Dr. Sbarbaro applied to the end of his own life. Despite urging of physicians and family, he rejected further treatments he felt wouldn’t have changed the outcome.

In his 40 days in a hospice facility, people lined up to see him. The man they saw was unchanged—still upbeat, determined, clear-minded.

What the visitors did not see were the quiet, private moments after visiting hours. Alone with his family, his daughter Anne recalls, he would turn to them and say, “I didn’t know all those people liked me.”