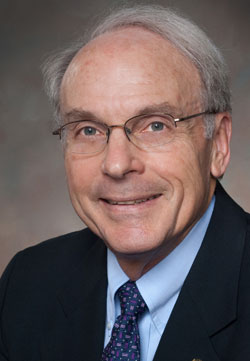 (November 2012) Last spring, not long before he took the reins as president of the American Medical Association (AMA), Dr. Jeremy Lazarus returned to his beginnings, taking rounds with a group of New York medical students to get the pulse of the next generation of doctors.

One of the students piped up, challenging him on the need for the nation’s largest and most storied medical association. “Why don’t you do something big?” the student asked.

“We staked our reputation on it,” he replied, explaining to the students that whether they agreed with the legislation politically or not, there was no denying the AMA had taken a bold stance.

Lazarus then told the student that the AMA would have his back in major health care policy matters and help him individually as he entered his practice.

“I think I signed one up,” Lazarus says with a grin.

But Lazarus, who has been a Denver psychiatrist for 40 years and is a clinical psychiatry professor at the CU School of Medicine, knows that this is no laughing matter. He will serve during one of the most volatile times in decades, and not just because the country remains divided over health care reform.

AMA membership has been declining, though the organization has welcomed a rebound in the last two years. In the 1950s close to 75 percent of U.S. physicians were full members. Now, excluding medical students and residents, the figure is about 15 percent according to a 2011 estimate by the Canadian Medical Association.

Lazarus sees improving the message of the AMA as one of his missions: “You can’t say, ‘Join just because.’”

Younger doctors, he says, need to understand the power they hold in these shifting times in everything from shaping public health policy to better serving returning veterans to making billing and insurance procedures more efficient. Lazarus recognizes that “there’s a fair amount of physicians out there who are unhappy.”

His own son is one of them. Dr. Ethan Lazarus, a 1996 CU medical school graduate who is now a family doctor in Denver specializing in the treatment of obesity, says he often discusses with his father the frustrations he feels in negotiating the health care system. But no matter what the topic—from a gripe to an exciting new treatment—he says his father always listens thoughtfully, then asks the same question: “Yes, but how is that going to benefit the patient?”

Ethan, along with his sister-in-law, nominated Jeremy Lazarus for the presidency. Ethan calls his father his role model, adding: “Dad completes what he starts.”

That would be an understatement. Lazarus has competed in 13 Ironman Triathlons and run 13 marathons. He is an accomplished saxophonist, violinist guitarist. He also sings. (He worked his way through college singing at weddings and bar mitzvahs.)

Lazarus has a deep love for the arts and says his choice of psychiatry is linked to his fascination with literature. Why, he would ask, did characters do what they did?

His longtime friend, Dr. Mark Levine, another volunteer professor at the CU medical school, jokes that Lazarus would give the bearded guy in the Dos Equis beer commercials a run for his money as “the most interesting man in the world.”

Levine says his friend is the right man for the AMA job because he has the gift of listening to all voices equally.

“He engages everybody,” Levine says. “I don’t think you could do that by starting from one preconceived answer.”

In the coming Lazarus will be logging thousands of miles, traveling far and wide as he tries to open the tent of the AMA so all will feel welcome. The way health care is being delivered is changing, and, he says, even though there are different views and voices it is important that physicians work together.

Darrell Kirch is another person with CU medical school connections playing a leadership role in medicine. Kirch, who received his medical degree from CU in 1977, serves as president and chief executive officer of the Association of American Medical Colleges (AAMC). The group represents the accredited U.S. and Canadian medical schools, and hundreds of teaching hospitals, health systems, and academic and scientific societies.