Writing Down the Hard Stuff 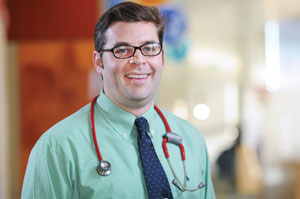 (May 2010) You could say that Dr. Jamie Feinstein’s literary career started like so many others: with a rejection. But for Feinstein, it was rejection times 50.

He had persuaded about a third of his 150 classmates at of Pennsylvania to write essays for second-year medical students, coaching them on how to survive their upcoming third year—a project similar to CU School of Medicine’s Letters to a Third Year. The third year is tough, as students enter clinical settings fulltime. He thought the essays would be helpful for dealing with dying patients, arrogant doctors, unexpected kindness, beginner mistakes.

However, “It was not exactly met with open arms” by the administration, Feinstein says.

“I think they were worried that we were going to be writing down horror stories to second-years who shouldn’t have that perspective yet,” recalls Feinstein, who is a fellow in Academic General Pediatrics working with patients with complex chronic conditions at Children’s Hospital Colorado.

What came out of that rejection was Short White Coat, self-published through iUniverse Inc. It contains his essays on the third-year experience, which he hopes will help overwhelmed students realize they are not alone. Most of the few thousand book sales have been to medical schools.

“I did it to keep sane without a doubt; it was my outlet,” says Feinstein, 32, who is working on a master’s of public health degree in biostatistics. “There is no one to talk to once you’re in the midst of a clinical year. You are separated from your friends. You’re seeing a lot of things, and sometimes people didn’t want to talk about them. That’s when I picked up writing with a fury.”

Doctors he met could be compassionate and wise or rude and dismissive. Patients were often frustrated and short-tempered, but could also be counted on to guide a new doctor or make him laugh when things were tense.

There was a convict who taught him how to draw blood, gently coaching him to hold the needle at the right angle and anchor the vein.

“I’ll make you a deal,” the convict proposed. “I’ll teach you how to draw blood in exchange for a Snicker’s bar.” Feinstein readily accepted.

And there was a doctor he followed who had taken care of multiple generations of families as a sole practitioner.

“I went from a very big shiny cold hospital in my first couple weeks to a doctor who was still making house calls,” Feinstein says. “He was just a humble guy who did his work. What impressed me was the interaction between him and his patients.”

Two of that doctor’s patients, a couple named Jack and Hannah, spurred his first short story: "Bag of Humility."

“Dr. Freedman knelt in front of Hannah on the raggedy carpet,” Feinstein recalls. As he opened his black leather bag to take out his stethoscope, an overwhelming sadness enveloped me. The strong woman sat wilted in her chair. She had a painfully empty stare ….”

After checking on Hannah, Freedman struggled to convey the news of her approaching death. He made meandering attempts only to have Jack shift the conversation. Finally, Jack took over.

Feinstein remembers writing a lot as a child. “I even bound my own books. My mom has an entire shelf of my books,” Feinstein recalls. And as a medical he realized that writing worked best for him when it came to expressing his emotions.

“I don’t consider myself a very good speaker; I’m better at writing. At least, I like to believe I write a heck of a lot better.”

The book he is working on now concerns a sensitive topic: making medical errors as a young doctor and how educators deal with them. “Making mistakes is part of training,” he says. “Putting some of this stuff down [in writing] has been tough.”

But writing is part of his life, and he misses it when he doesn’t do it.

“I’ve always written to make sense of what I am going through.”